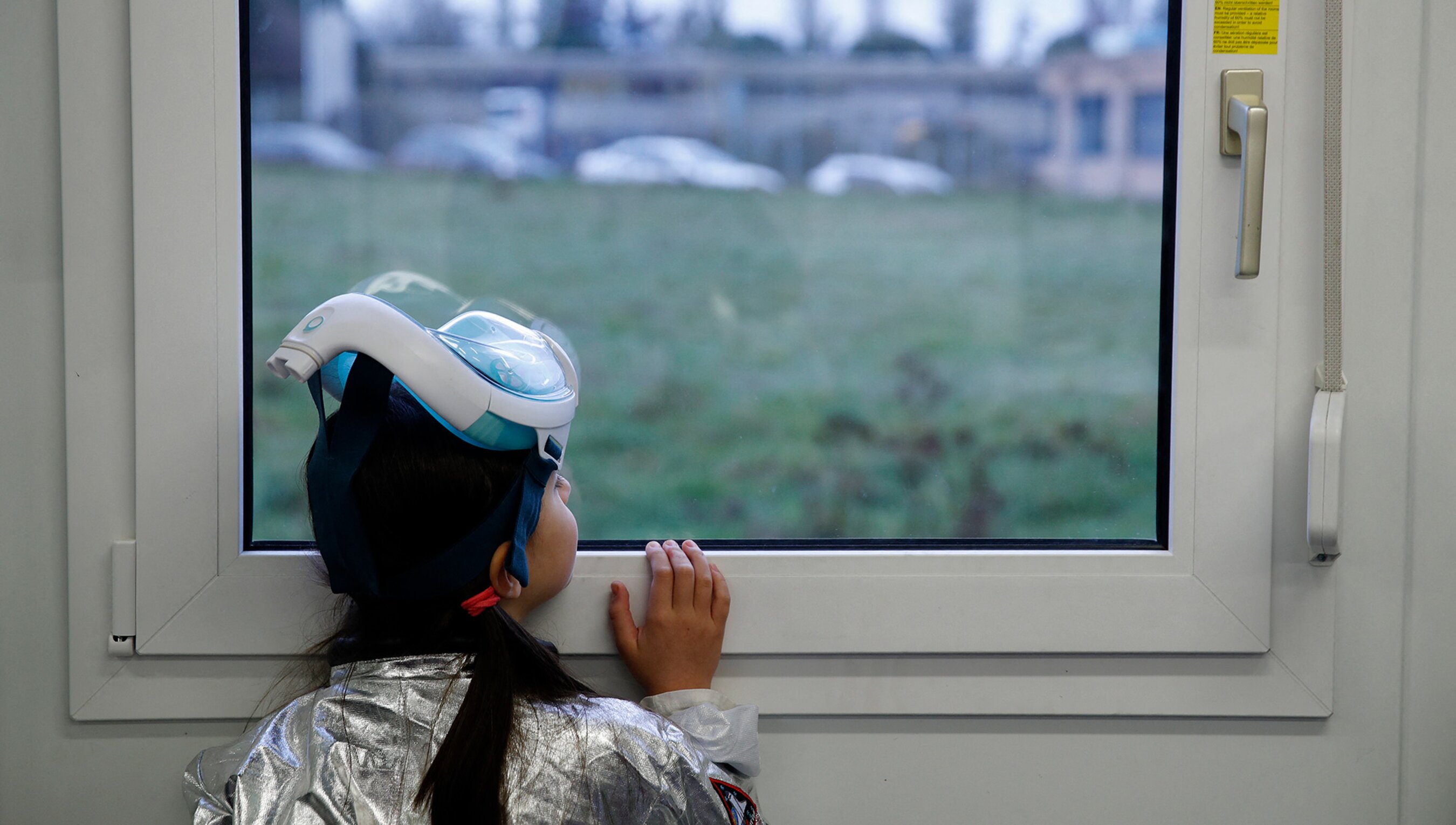 Celia, wearing a spacesuit costume, gazes out through a school window during their project Mission to Mars at the Vivalys school in Lausanne, Switzerland. 17 March 2021. Photo by Stefan Wermuth/Getty

Imagine you could insert knowledge into your mind: should you?

Celia, wearing a spacesuit costume, gazes out through a school window during their project Mission to Mars at the Vivalys school in Lausanne, Switzerland. 17 March 2021. Photo by Stefan Wermuth/Getty

is a senior lecturer in philosophy of education at Liverpool Hope University, UK. He is the author of Children, Religion and the Ethics of Influence (2019).

Did you like school? While some of you might have loved it, I suspect that many didn’t. The prospect of underachieving at high-stakes exams, or falling behind in class, can be a source of anxiety. Even if you’ve never experienced any such angst, there’s an enormous opportunity cost to the time spent consuming all that information and building all the skills demanded by compulsory education. Ask yourself: is there anything else you’d rather have been doing with all that time?

Consider the following case of what I call ‘knowledge insertion’ from The Matrix (1999). In the movie, the protagonist Neo discovers that the world as he knows it is a computer simulation designed to help enslave humanity. To free humanity, it (apparently) helps to know kung fu. While Neo doesn’t know any, he doesn’t need long to learn it. Via a computer cable plugged into the back of his skull, the martial art is downloaded into his mind, instantaneously making him an expert.

If you could, would you follow Neo’s example and ‘insert knowledge’ – or indeed any other valuable dispositions, such as character traits? After all, it’s not just knowledge that Neo has ‘inserted’, but the kung fu ability that the kung fu knowledge has enabled. In fact, there are many desirable states that can’t necessarily be reduced to ‘knowledge’ – such as being courageous, intelligent, creative, funny and athletic – but might be facilitated by it.

We might then ask: if it were possible, would you follow Neo’s example and ‘insert desirable states’ more generally? Or would you miss out on something significant in doing so? While most people seem to think there’s something wrong with knowledge insertion, they struggle to find a convincing reason for disliking it. After all, it clearly has upsides: it could save thousands of hours of exercises, working through revision books, using flash cards, and rehearsing mnemonics. The hours freed up could be spent doing any number of things that we value instead.

Maybe such misgivings can be explained by mere squeamishness or a bias towards the status quo? Perhaps that’s true, but there are some interesting things to say on behalf of the doubters. Clarifying their concerns might help us understand what we value about learning as an activity, and what to make of ‘shortcuts’ when they arise.

It’s the value of insertion, rather than the value of knowledge itself (or of other desirable states), that I’m interested in here. So whether knowledge insertion is desirable depends on the relative merits of simply having knowledge put in your head, as opposed to arriving at it in other ways. What might Neo be missing out on then?

One argument in favour of traditional learning is that we often pick up unexpected bits of knowledge when we’re on the path to learning something else. If we just ‘inserted’ the original lesson, these side-lessons would be lost. However, this defence fails. If the side-lessons can be specified in advance, we could simply make them part of the data package to be ‘inserted’. If the side-lessons can’t be specified, it’s hard to see how they could usually motivate learning by traditional means, on the off-chance we might acquire something that compensates the extra demand on our time. For instance, we wouldn’t make it our policy to walk huge distances in the hopes that something – we know not what – might happen on the way to justify walking instead of driving or flying. True, if being able to insert knowledge meant we could only ever learn lessons that were specified in advance, our epistemic horizons would be much too bounded. However, sustained acts of deliberate and focused learning are not the only times when we learn side-lessons.

To see what else Neo might be missing, it helps to distinguish between three things that add value to our lives: pursuing valuable goals (effort value); achieving valuable outcomes (achievement value); and simply being in valuable states, irrespective of effort or achievement (state value). Attempting to learn kung fu to a high standard can add value to our lives via effort value, as can mastering the skill (achievement value). Simply knowing kung fu can add value to our lives, irrespective of how we got there (state value). It can be a good in itself to be someone who knows kung fu, and, additionally, it might sometimes be useful to know kung fu.

With these distinctions in mind, we can see that, while Neo obtains the state value of knowing kung fu, he doesn’t get effort value and achievement value. However, sometimes achieving a state adds little to its value, or simply comes at too high an opportunity cost to be worth paying (especially if, like Neo, you need to know kung fu to fight an army of evil computer simulations). Furthermore, sometimes the opportunities for effort and accomplishment value that we’d lose through knowledge insertion – such as figuring out how to block a punch, or play a chord – can easily be recouped. That is, we can create new opportunities for attempting and accomplishing other feats, such as the chance to defeat an army of evil computer simulations, or to write a new song.

But what if those hours of practice mean that people are said to somehow earn or deserve their knowledge? Maybe what Neo’s missing out on is some kind of just desert. In that case, we might ask whether it’s better to have more knowledge less deservingly, or less knowledge more deservingly. Sometimes desert might not matter all that much. When it comes to the language or languages we grow up speaking from childhood, it’s largely a matter of luck, not desert. Yet this doesn’t appear to trouble us. Indeed, since we can’t create ourselves from nothing, we need at least some undeserved capacities and potential to be able to do anything worthwhile at all.

In cases where something is scarce, perhaps – other things being equal – it ought to go to the most deserving. However, when we’re thinking about the most efficient route to achieve an identical outcome, desert might come at too high a price. More radically, we might wonder whether desert is even intelligible in this context: it’s not clear to me that there’s anything valuable in refusing an efficient route to knowledge, or worse, missing out on knowledge altogether because we’re wedded to gaining it effortfully. So why not remove existing obstacles if they unnecessarily hinder that knowledge acquisition?

What if knowledge insertion might mean missing out on the pleasure of pedagogical relationships? Teacher-student connections have value beyond the efficient production of ‘educational goods’, just as parent-child relationships have value beyond creating functional adults. Educational researchers have emphasised the intrinsic value of the emotional, intuitive, imaginative, engaged, attentive and responsible aspects of the pedagogical relationship. Not only might it be good for teachers to teach, but it might be good for their students to be taught; being cared for, attended to, and coming to maturity through a history of having one’s attention directed and redirected by trusted and trustworthy others could be good for us. There seems to be inherent value in guiding and being guided towards knowledge in relation with others, rather than merely having or stumbling across it. If missing out on such relationships was an appreciable loss, then perhaps we should forego some inserted knowledge (and the opportunities it creates) in order to preserve them.

However, this loss might be easily compensated or recouped. Consider ‘generative partnerships’, where individuals collaborate on equal terms to create and discover new things. Think of Francis Crick, Rosalind Franklin, James D Watson and Maurice Wilkins discovering the structure of DNA, or John Lennon and Paul McCartney writing ‘She Loves You’ (1963). Participating in such relationships requires a suite of complex skills and knowledge. So it might be OK to forego some teacher-student relationships, in order to gain the complex skills needed to participate in generative partnerships. For instance, it’s better for Lennon and McCartney to write songs together than for McCartney to teach a novice Lennon how to play the guitar. At any rate, we could always recoup any loss simply by learning something from a teacher at some point in our lives, and teaching something to a student.

There’s another potential problem with knowledge insertion, though. Imagine talking to a good friend who’s suddenly struck by lightning but, instead of dying, she’s deeply changed: she now has dramatically different attitudes, manners, tastes and interests. You might worry that she was indeed killed by the lightning and then replaced by someone else. A similar thought occurs to people who see their loved ones with Alzheimer’s disease or other forms of cognitive decline. Perhaps knowledge insertion would be like this: instead of benefitting us, it effectively creates a new person to stand in our place.

This prospect invites us to consider the kinds, quantities and rate of change we could undergo without being replaced by an altogether new individual. I don’t know how gradual such a transformation would need to be in order to avoid this threat – but it would certainly seem unwise to download a comprehensive and abrupt set of changes to what one believes, values, desires and remembers. In these circumstances, it would be hard to regard yourself as having survived knowledge insertion.

Even if we dodge the threat of replacement by downloading a modest suite of knowledge at a suitably gentle pace, we might still worry that knowledge insertion would make us become someone we wouldn’t want to be. This isn’t always a problem. Suppose Neo was racist and wanted to stay racist. I’d say that losing his racism as an unexpected and unwanted side-effect of uploading kung fu would be objectively serendipitous. Any antecedent hostility to becoming non-racist wouldn’t constitute a problem: it should be a welcome becoming.

However, while unwelcome becoming isn’t always a problem, it might sometimes be. Perhaps we risk losing the concerns and interests that hold a friendship together. If so, we should be careful about what knowledge we insert, but that doesn’t mean we should avoid insertion as such. Human lives are full of unpredictable flux and change, so the problem of unwelcome becoming is equally a problem for doing anything at all – including not inserting knowledge.

It’s true that our journeys sometimes form part of our goals: when our purpose is to climb a mountain rather than simply be at the top; to score a goal rather than just place a ball in the back of net. In those cases, knowledge insertion might not help us achieve what we want. However, it would enrich our set of opportunities for effort, achievement and state value, while leaving us plenty of time to make the most of them. If we could, then, we should use knowledge insertion often.

Since we can’t (at least not yet), we can still appreciate that teacher-student relationships are valuable in themselves, and that our efforts and achievements are valuable precisely because they’re unavoidable for reaching our goals. At the same time, we should feel relaxed about taking shortcuts – because it’s not always the journey that matters.