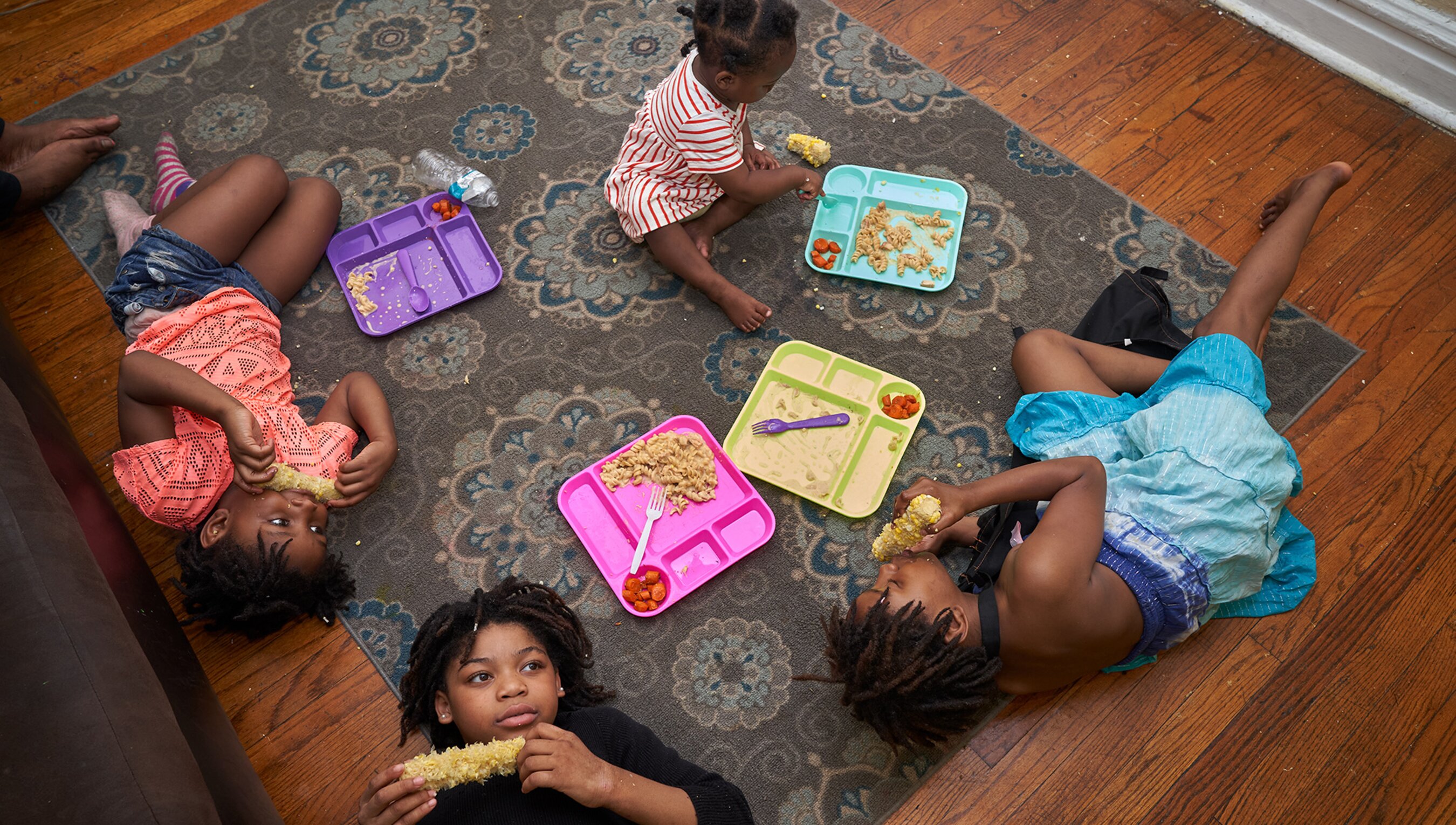 At the home of Manausha Russ and her children, who have no kitchen table or chairs. Saint Louis, Missouri, 12 June 2020. Photo by Brenda Ann Kenneally/Library of Congress

Over-optimism about racial justice is widespread and harmful

At the home of Manausha Russ and her children, who have no kitchen table or chairs. Saint Louis, Missouri, 12 June 2020. Photo by Brenda Ann Kenneally/Library of Congress

is associate professor of organisational behaviour at Yale School of Management. A social psychologist, his current research explores the behaviours and emotional states that maintain and perpetuate economic and social inequality in society.

We are awash in ideas about how to improve ourselves, our organisations and our societies. A closer look at some of these ideas reveals something about our psychology and its relationship to how progress is achieved. In short, the solutions proposed for addressing serious problems are often kind of feeble, poorly conceived and doomed to fail, whether it’s counting on compostable straws to stop climate change or on an annual bias training programme to defeat racism.

Certainly, there is an appealing way of thinking about these proposed solutions. They require people to do very little, the idea being that the cumulative impact of small changes could lead to meaningful transformations of organisations and society. Unfortunately, reality often rejects such optimistic and simplistic narratives of progress. Change, as it turns out, is not always positive, preordained, natural, linear or automatic. Instead, change can be negative, difficult or short-lived, and the status quo can be defended aggressively.

The psychologist Jennifer A Richeson and I, along with our trainees, have been studying misleading narratives of change for the better part of a decade, primarily in the domain of racial progress. In this context, people are overly optimistic about the achievement of racial equality. As the common narrative goes, in the past, societies like the United States were unfair to minoritised racial groups, but through gradual changes they have become more equal to the point where racism feels more and more like a thing of the past. In this narrative, greater justice and equity is at the centre of gravity in societal change: when you listen to people trace a narrative arc of racial progress in the US, they might start with President Abraham Lincoln’s Emancipation Proclamation of 1863, move to the 1954 Supreme Court decision to desegregate schools, make reference to the success of the civil rights movement in the 1960s, proceed to the election of our first Black president, Barack Obama, in 2008, and end with the so-called racial reckoning of the summer of 2020 that centred around George Floyd’s murder by police.

Across time, this narrative arc is always moving toward greater racial equality. It both downplays the setbacks and highlights the successes on the path to justice. In our studies, you can see the narrative arc in how people make judgments about racial equality on something like the wealth gap between Black and white Americans. Wealth is by many accounts the most important financial indicator because having it allows people to absorb unanticipated financial shocks due to new expenses or a sudden loss of income. The US federal government has been collecting data on racial wealth inequality since 1963. We can use that data to examine how people perceive progress toward racial equality – and how that compares with actual progress.

Society does not constantly move forward towards greater racial equity over time. Inertia and backlash are possible, too

The reality is very different from these perceptions. The racial wealth gap between Black and white Americans is wide and has been since before the federal government started measuring it. Wealth is accumulated across generations, and so any structural racism visited upon Black American families in the past shows up in inherited wealth, and continues to show up in new wealth as policies and practices related to income, debt and housing continue to favour white Americans. Thus, whereas our respondents guessed that the 1963 gap between Black and white American families was about $50 to $100, the actual gap was more like $6 to $100. And while the estimated 2016 gap between Black and white families was about $90 to $100, the actual gap was around $11 to $100. Though people commonly assume steady progress — as they have in estimates of racial progress collected in the American National Election Survey or at Pew – the reality, in terms of wealth and many other financial indicators (including wages and income), is that society does not constantly move forward towards greater racial equity over time. Inertia and backlash are possible, too.

The assumption of progress toward racial equity, which is a corollary to any number of other optimistic beliefs about societal progress, has a few clear implications for making plans for the future, both for oneself and for society. For individuals, believing that the world is more just and meritocratic than it really is produces striving and effort, whereas attending to the persistence of massive inequities is profoundly demotivating. Narratives of striving and effort were very salient in my family growing up and in many other American immigrant families – pursuing the American dream is all about your striving and effort being rewarded with a better life in the US.

When racial justice organisations propose that police departments should have their funding reduced, moderate political pundits call this action rash and impulsive

But a determined belief in constant progress toward racial equity, despite contrary evidence, makes it far more difficult to enact the kind of large societal changes necessary to actually transform society into the more equitable version of itself that people have in mind. This tendency to believe in progress means that people believe things are pretty equitable already and, by implication, we do not need to rush to make many (or any) big changes to our current practices.

A belief in automatic, natural and linear progress also suggests that time – and not behaviour – is the causal mechanism for producing racial equity. Essentially, rather than doing the sometimes difficult work of transforming racist policies, people might just wait for those policies to lose favour over time. In this way, patience can be construed as an effective strategy for producing progress, and action can be seen as rash or even likely to backfire.

One example of this phenomenon lies in efforts to change management representation in organisations. Targeted recruitment of managers from minoritised groups is an empirically effective policy, yet it requires significant changes to hiring practices that might seem to hiring managers like an overcorrection. Instead, organisations are more likely to adopt lighter-touch approaches such as anti-bias training modules, despite the limited evidence of their effectiveness. The preference for patience over action also appears in responses to the racial justice movements that exploded in 2020. Time and again, data and reporting show how much harm police officers can cause in Black communities. But when racial justice organisations propose that police departments should have their funding reduced, many moderate political pundits and strategists call this action rash and impulsive. Pushes for significant legislation on policing have been derailed as well. Under a belief in automatic racial progress, patience seems like the path to justice, whereas direct and evidence-based action is seen as a mistake.

The good news is that, when we can identify an urgent problem, we do have many collective experiences with making evidence-based policy choices. One highly salient example is the widespread adoption of vaccines to combat COVID-19 (although encouraging full adoption, as we know in this case, is not without challenges). The central problem with narratives of automatic progress toward racial equity or other advances is that they allow many people to delay, deflect and dissemble before moving toward genuine solutions – and, in the process, many people who are the most vulnerable suffer.

A determination to believe in progress is an understandable response in a society that faces a lot of difficult challenges in the future. These include ongoing international conflicts, management of global disease spread, the emergent climate disaster we are poised to live through and, indeed, all the dimensions of inequity that come with these challenges. But the belief that the situation will inevitably improve also cripples our collective capacity to respond to these impending challenges. Only a people with the discipline to see the world for what it actually is, rather than what we hope it could be, will be able to engage in the radical actions that are essential for making hope a reality.