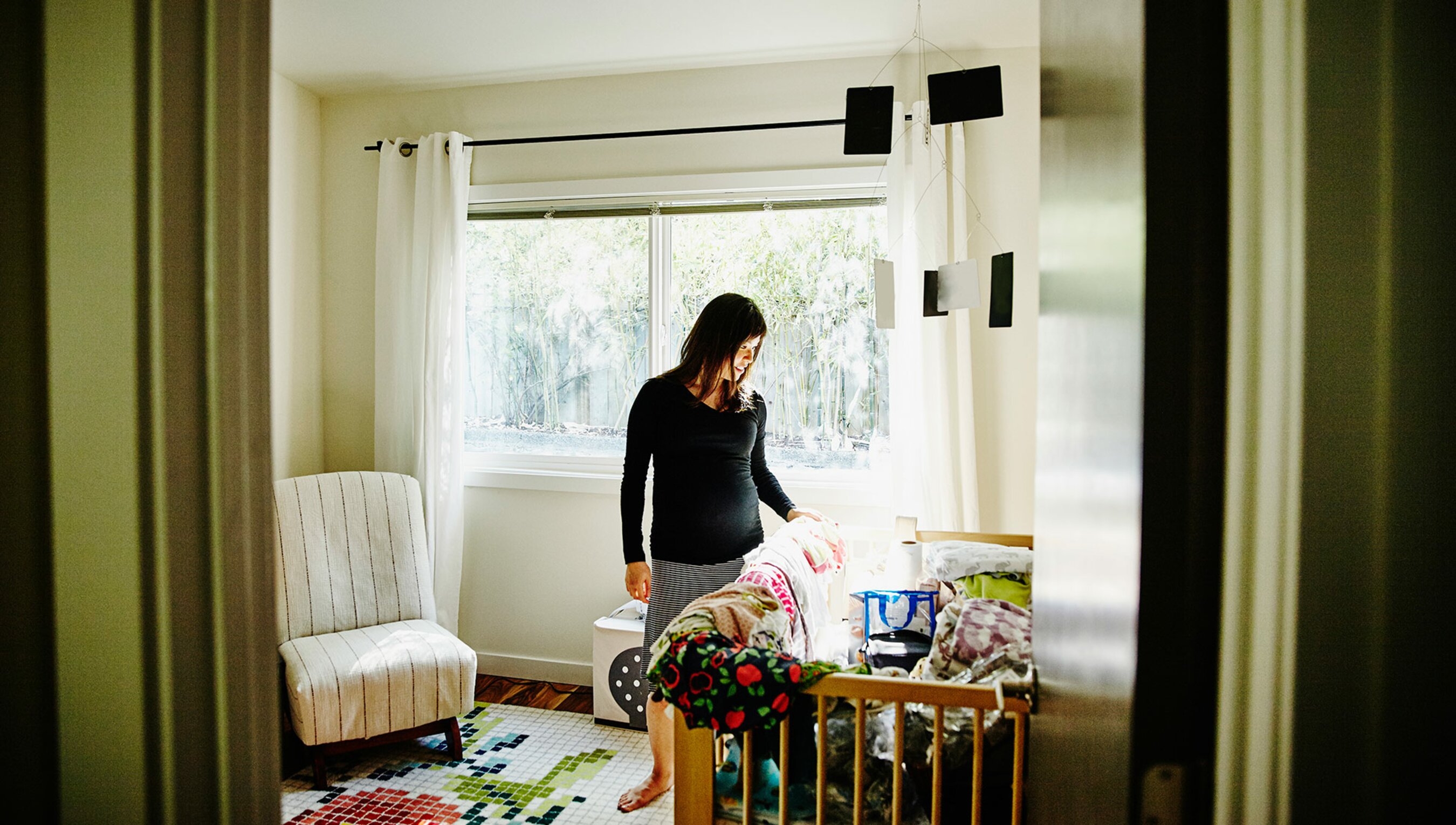 Pregnant women ‘nest’. But there’s nothing biological about it

is a senior lecturer in ethics at Brighton and Sussex Medical School. Her writing has been published in Prospect and the London Review of Books, among others. She is as an editorial board member of Kohl: Journal for Feminist Research on Gender and the Body and is science editor for the online literary magazine The Offing.

A couple of years ago, a school friend posted online that she’d been deep-cleaning the house while her husband stood by, laughing. She was seven months into her second pregnancy and knew the drill: she was nesting. Social media is replete with accounts of bouts of meticulous cleaning, tidying and decorating as due dates draw closer. The tone is one of amusement, rather than surprise; they knew it was coming. Pregnancy manuals and websites make it clear that this compulsion is as natural and irrepressible as pregnancy itself.

Could pregnancy really cause people to clean and tidy? It’s not such an unreasonable suggestion. A new member of the household is on the way, whose needs are urgent and particular, and who will consume the energies of her carers so completely as to rule out much else. It makes sense to get ready while there’s still time, to clean, prepare, baby-proof and perhaps even revamp things a little, to cast out what doesn’t spark joy ahead of a new beginning.

But that’s not quite how ‘nesting’ is presented in pregnancy books and online, which is where most pregnant women get their information. ‘The need to nest can be as real and as powerful an instinct for some humans as it is for our feathered and four-legged friends,’ says the bestselling manual What to Expect When You’re Expecting (5th ed, 2017) by Heidi Murkoff. It goes on:

For some it’s subtle. All of a sudden, it becomes vitally important to clean out and restock the refrigerator and make sure there’s a six-month supply of toilet paper in the house. For others, this unusual burst of manic energy plays itself out in behaviour that is dramatic, sometimes irrational, and often funny …

Pregnancy websites have similar entries, advising that it’s ‘very common to have the overwhelming need to decorate your house, organise your wardrobe and clean everything in sight’, while ‘husbands get yelled at for dropping their socks in the wrong place and the pantry is cleaned and the products alphabetised’. Nesting is depicted not as a set of rational space-preparation activities for expectant parents, but as a set of irrational, hormonally compelled and evolved behaviours, unique to women. No scientific evidence is cited, but it’s assumed that nesting in humans is an analogue of nesting in other animals – birds, mice, rabbits, rats – for whom it is literal: they build physical nests in which their infants will be born and housed.

The catch is, there’s no evidence for biologically mandated nesting in humans. In my research, I found just one study suggesting that women are more likely to clean and tidy during the third trimester of pregnancy. But its findings are based on a questionnaire that asks women to self-report their behaviour, and so its findings are susceptible to taint by women’s own internalised biases. Participants were recruited via pregnancy websites and adverts; so the study’s findings might also be compromised by selection bias, since the recruitment method is likely to attract those who are already well-versed in the details of nesting.

I came across two other studies that examined unusual cleaning and tidying due to hormonal changes in the menstrual cycle, rather than pregnancy. Both used small sample sizes and made troubling assumptions but, most worrying of all, their findings are contradictory. One describes nesting across the 14-day luteal phase, the other across the six most fertile days – leading to the implausible conclusion that women are driven to nest for more than half of every month.

There’s no denying that many pregnant women experience nesting: three-quarters of those polled report unusual amounts of cleaning and tidying. But when the evidence base is thin, questionable and contradictory, why do so many websites, books and magazines continue to describe nesting as hormonally determined? The conventional explanation for these culturally specific behaviours (ordering furniture for the nursery, buying toilet rolls, organising linen) dives straight down to the endocrinological level, and from there back to an ancient evolutionary origin. There’s an attractive simplicity to the story: the infants of those mothers who best prepared their living spaces would be most likely to survive, inheriting the genes for ‘nesting’ and passing them on into perpetuity. As one tabloid headline put it: ‘Why pregnant women are obsessed with tidying and nesting: it’s all to do with their inner cavewoman.’

Not only is there no evidence for a hormonal or evolutionary basis for nesting – there are also no studies that demonstrate a mechanism for it. That is, it’s not clear how hormonal changes could bring about shifts in the brain that compel space-preparation activities. And in any event, our understanding of the pressures on early humans is limited. Early humans lived in groups, and survival required cooperation in child-rearing, so it’s not clear that preparing the ‘nest’ would have been solely or even chiefly a pregnant woman’s role. As the philosopher Subrena Smith argues, even if we had more information about the adaptive challenges that our ancestors faced, we couldn’t assume that modern cognitive mechanisms retain the fitness-enhancing functions they once served.

Another sticking point is that human hormones are more complicated than popular discourse would have us believe. It’s long been assumed that testosterone correlates with aggression in human males, as it does in many other animals – but more recent, rigorous analyses show that there’s little relationship between the two. Perhaps the most well-known example of hormones affecting human behaviour is in premenstrual syndrome, in which low mood is reported prior to menstruation. Yet a 2012 review of 47 scientific studies concluded that there’s no clear evidence for a negative mood in the premenstrual phase. Widespread notions of how hormones dictate our behaviour – making men aggressive and women emotional – are not borne out by science. The cognitive scientist Cordelia Fine takes on these myths in her work, most recently in her book Testosterone Rex (2017).

The biological explanation for nesting has serious social and political consequences. That’s not to say that we shouldn’t investigate the possibility of a biological root, but that we should be mindful of why we’re fixated on that particular kind of explanation. Nesting is not the first instance of women being wedded to gender-stereotypical tasks through some dubious biological link. There have been various attempts to construct and perpetuate a scientific basis for women performing housework by, say, proposing that women must engage in cleaning, laundry and cooking in order to maintain healthy levels of oxytocin, or that women have an innate visual gift for spotting untidiness in their surroundings. There’s no evidence for these myths, and they’ve been firmly debunked.

The uncomfortable reality is that, even outside of pregnancy, women really do carry out more housework than men. A 2015 study of UK parents’ time showed that women spend two to three times as long on housework and carework as men, even when both parents are employed full-time. As a result, married mothers get the least sleep, and men have an additional five hours of leisure time each week compared with women – a gap that has widened over the past 15 years. Importantly, this unjust distribution of housework is sensitive to social norms. Only 7 per cent of people think that mothers should work full-time, while 38 per cent say that part-time work is more appropriate, and a third say they shouldn’t work at all. Even where women’s earnings overtake their male partner’s, men tend to reduce their housework contribution even more, seemingly to protect their masculinity and reassert their expected gender role.

It’s not that women do more housework because of their biological make-up – they do it because they’re raised in a world in which they’re told it’s their place. As progress towards gender equality trundles along in public, the private sphere lags behind, shielded from scrutiny. Most housework is still considered to be ‘women’s work’, and the more repetitive and unrewarding the task, the more gendered the association. Gender stereotyping in relation to housework and carework is still such a troubling issue that in 2019 new rules were introduced in the United Kingdom to ban adverts that perpetuated stereotypes on the grounds that they are ‘likely to cause harm’.

The potential harms of the nesting discourse don’t stop at its unscientific basis or the entrenchment of limiting stereotypes. It’s also worth noting that the ideal that nesting encourages – of a pregnant woman who has a nursery to decorate, excess towels to discard, time to deep-clean the cupboards – is achievable only by a person of some means, who is not monopolised by existing commitments and has been afforded time off paid work prior to the birth of her child. Nesting assumes a home, a (usually male) partner, disposable income, time. As such, it is a very contemporary, middle-class ideal that doesn’t reflect the reality of those who must work until the onset of labour, who are attending to the urgent needs of other dependents, and who have no dedicated space for the new infant.

In light of all this, accepting a hormonal, evolutionary story for nesting requires a leap of faith that isn’t scientific. As the philosopher Lynn Hankinson Nelson points out, we should reach for evolutionary explanations only once we’ve ruled out equally viable alternatives. We will always be limited in what we can know about our distant evolutionary past, and such accounts are therefore especially vulnerable to being warped by our values. ­­­So what are the alternative explanations for ramping up all that cleaning and tidying in the final stages of pregnancy?

First, note that we hold women to higher standards of household tidiness and cleanliness than men, appraising dirty, untidy rooms differently in accordance with the alleged gender of the occupant. These social pressures intensify during pregnancy, when women are under greater social surveillance than at any other time. Further, repetitive tasks such as cleaning and tidying are often used as a coping strategy for regaining control in times of increased anxiety. It’s also worth observing that maternity leave typically doesn’t begin until the third trimester, which is when nesting is reported to kick in. That means women are cleaning and tidying in the window of time between work ending and labour beginning, which looks less like a biological urge and more like pragmatism, or even boredom.

In other words, there’s no shortage of persuasive motivations for intensive space preparation activities in late pregnancy. Nesting starts to look like common sense, or a response to gendered social norms. No biological incentive is needed. The fact that biological explanations appear so attractive has a lot to do with an over-simplistic understanding of gender and sex, in which we attempt to ground the patterns of our complex cultures in biology, where they’re crystallised, entrenched, unchangeable. There’s comfort in this strategy. If housework is hormonally determined, then it isn’t sexist if women do most of it: we can take refuge in the myth that nature made us that way.

The remaining challenge is to tackle the tremendous gendered pressures that women face, particularly in pregnancy and motherhood. Perhaps the only startling compulsion in all of this is the dogged, irrational yearning to root our social world in biology and thereby scupper the path to good science and to justice.