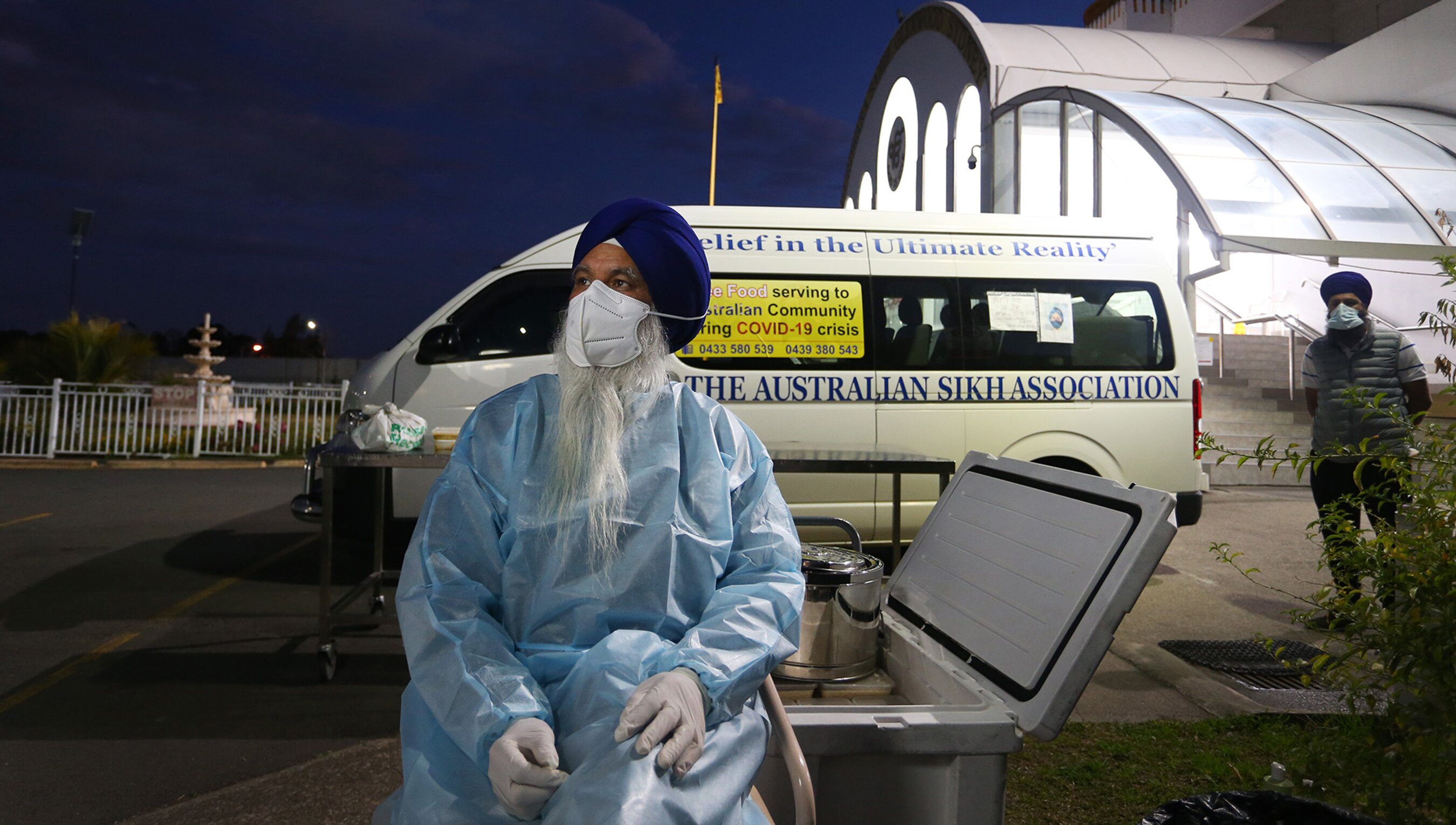 The Australian Sikh Association’s nightly food service for members of the community and those in need during the pandemic; Sydney, 19 August 2021. Photo by Lisa Maree Williams/Getty

Sikh ethics sees self-centredness as the source of human evil

The Australian Sikh Association’s nightly food service for members of the community and those in need during the pandemic; Sydney, 19 August 2021. Photo by Lisa Maree Williams/Getty

is an assistant professor of philosophy at the University of Alabama, Birmingham. His writing has been published in Synthese and The Monist, among others. He lives in Birmingham, Alabama.

As a moral philosopher, I spend a lot of time thinking and writing about questions such as ‘What is it to be a good person?’ and ‘How should we treat other people?’ During my philosophical training, I learned what philosophers such as Plato, Aristotle, Immanuel Kant and John Stuart Mill had to say about these questions. But this wasn’t the first exposure I had to moral questions. Like many people, I grew up in a religious household, and what I was taught about ethics came from the religious tradition I was raised in.

I’m a Sikh, and I was raised in the Sikh religious tradition. Long before I was exposed to the works of any Western philosophers, I looked to the teachings of the Sikh gurus, enshrined in our scripture, Sri Guru Granth Sahib Ji, for moral guidance. This has recently got me thinking: how does Sikhism approach the ‘big questions’ of Western moral philosophy?

Before I go on, a brief introduction to Sikhism for those who are unfamiliar with it. Sikhism is the world’s fifth-largest organised religion, with around 25-30 million practitioners. It’s also one of the youngest of the major world religions: it was founded by Guru Nanak Dev Ji, who lived in the 15th and 16th centuries, and became the first of 10 Sikh gurus. Sikhs believe that the Divine is a fundamental unity underlying all of reality, and that, as manifestations of that Divine unity, all people are equal. Sri Guru Granth Sahib Ji tells us: ‘Look upon all with equality, for the Divine Light resides in everyone.’

According to the Sikh worldview, the whole is prior to its parts. The level of reality at which we are all individuals is a less fundamental reality than the level at which we are all One. This is a different worldview from that of most philosophers in the Western canon, who have usually posited the individual as fundamental. Western philosophers tend to think of the parts (us) as prior to the whole (if any whole even exists).

Correspondingly, the Sikh tradition ends up giving a different story about morality from most of Western philosophy, one that’s grounded in a belief in the fundamental unity of all things. Central in that story is the concept of haumai, which literally translates as ‘I am’. Haumai is a person’s false sense of themselves as singularly important, that the world revolves around them, and that the experiences, wants and needs of others are somehow less real or significant than their own.

According to Sikh scripture, haumai is the source of all injustice and human evil. It leads us to fail to recognise that other people share the very same ethical significance we have. The more consumed we are by haumai, the more we focus on our own wants and needs at the expense of our concern for others. At the extreme, we start to think of ourselves as the only ones who matter at all. Sri Guru Granth Sahib Ji tells us that ‘those who have virtue as their treasure destroy haumai’.

Haumai is also the main obstacle to achieving spiritual enlightenment, which is a matter of apprehending and connecting with the Divine. And we connect with the Divine by recognising the sense in which we are fundamentally all One. Haumai, then, is essentially an excessive sense of individuality that leads us to misperceive reality. And this leads to an important insight: failing to care for others and treat them well quite literally gets things wrong, by manifesting the false view that we are all disconnected individuals, and that one person’s wants and needs can have a significance that others’ wants and needs don’t.

To be clear, I’m not suggesting that Sikhism eschews individuality altogether. In fact, the Sikh gurus were highly critical of religious practices of the time that involved trying to somehow negate the self and destroy one’s individuality. Ascetic practices, such as ritual bathing and self-mortification, are decried in Sikh scripture as not just self-indulgent, but self-undermining. No matter how much one might try to negate one’s self in these ways, one only focuses more on one’s own individuality, and one’s sense of personal importance separate from that of anyone else. This ends up constituting its own form of haumai.

Instead of trying to negate the self, Sikh scripture preaches recognising oneself as part of a unified whole through the practice of treating all as One. We can’t make ourselves good people simply by training ourselves to think pure thoughts. We have to go out in the world and do good for others. Only through this practice can we come to truly apprehend the fundamental unity behind everyone and everything.

How do we engage in the practice of treating all as One? The answer is relatively simple: by treating others as having the very same kind of ethical significance as we do. This means not only doing good deeds, but doing those deeds for the sake of others. A good deed done out of selfish motives has no moral value; if one does good deeds out of a desire for status or recognition, one acts out of haumai.

Rather than helping us to recognise our interconnection with others, acting out of haumai can only perpetuate our separation from others. That’s why, in the Sikh tradition, the idea of seva (selfless service) is so important. We have to practise seeing all as One by doing good deeds for others for their own sakes. We can’t do it just by having the right views, and we can’t do it by doing the right things for the wrong reasons.

Sikh scripture also discusses the kinds of impulses we all have to fight against that keep us in haumai and cut us off from ultimate reality. The ‘five thieves’ are vices of character that, metaphorically speaking, plunder our souls. These five vices can be very roughly translated as (objectifying) lust, wrath, greed, attachment and arrogance. All of them degrade our character, and they all do so by manifesting haumai. Whether through sexual objectification, material greed or emotional possessiveness, when we manifest these vices, we fail to see the world around us through any lens but that of our own selfish concerns. We fail to accord anyone else any importance that doesn’t reduce to the importance we accord ourselves.

All of these familiar vices are ways of failing to care appropriately about others, and so failing to comprehend the sense in which we are all radically interconnected. To rid ourselves of these vices, to rid ourselves of haumai, we need to treat others not as mere objects there for us, as subjects, to use and manipulate, but rather as parts of the very same whole that we ourselves belong to. In other words, to rid oneself of haumai, one needs to stop expressing ‘I am, I am’, with one’s actions and start expressing ‘We are.’ But what does this practice look like more specifically? What particular kinds of actions should we undertake to rid ourselves of haumai?

Living in a capitalist society that prizes individualism, it often feels like haumai is inescapable

One thing that is very clear is that our seva, our undertaking of good deeds for the sake of others, can’t be parochial. To rid ourselves of haumai, we can’t focus solely on doing good for people of the same race, religion or social class. Sikh scripture enjoins us to ‘look upon all with equality, for the Divine Light resides in everyone’. This means we must recognise the equal moral standing of everyone. It’s not enough for our deeds to be benevolent; they also must be egalitarian.

The Sikh gurus were committed to fighting against oppressive social structures of their time, such as the caste system and sati (the practice of forcing widows to take their own lives). Following their example, Sikhs are called to see systems of oppression and injustice as methods of enacting hierarchies that divide us and disconnect us from each other, and to fight against those systems. The desire to gain status and power over others is a clear manifestation of haumai, the false sense of ourselves as somehow fundamentally more important than others.

The gurus also created the institutions of kīrtan (collective singing) and langar (communal dining) with the goals of negating inegalitarian social structures and encouraging the equal treatment of all people. These practices continue to be central to Sikhism, with the goal of encouraging egalitarian and social-justice-minded thinking.

Of course, the moral ideals of eradicating haumai are not easy to embody, as the Sikh gurus recognised: as conscious beings with our own first-personal subjectivity, we are psychologically disposed to see the world from our own perspective, through the lens of our own wants and needs. According to Sikh scripture, we must transcend this human impulse toward haumai by contemplating the oneness of all, reciting the name of the unified Divine, and exemplifying these commitments in our ethical conduct.

In this way, leading an ethical life is a constant struggle against our own self-centred tendencies, and we should expect ourselves to regularly fall short. I know I certainly do. Living in a capitalist society that prizes individualism and competition, it often feels like the world is so suffused with haumai that it is inescapable. But the gurus recognised this too: ‘Engrossed in haumai,’ says Sri Guru Granth Sahib Ji, ‘the world perishes.’ Despite this, Sikhs are exhorted to maintain a spirit of chardi kala – eternal optimism. To fall into cynicism or despair would be its own form of haumai. This is why we Sikhs wear our distinctive articles of faith. Every day, when I tie my turban, I am reminded that, even when I feel powerless against the tides of darkness and separation, I must renew commitment to fighting for unity, justice and equality. And when others see my turban, I want them to know these commitments and hold me to them. For if there is one thing the Sikh ethical tradition teaches us, it is that only by being good to others can we truly become good ourselves.