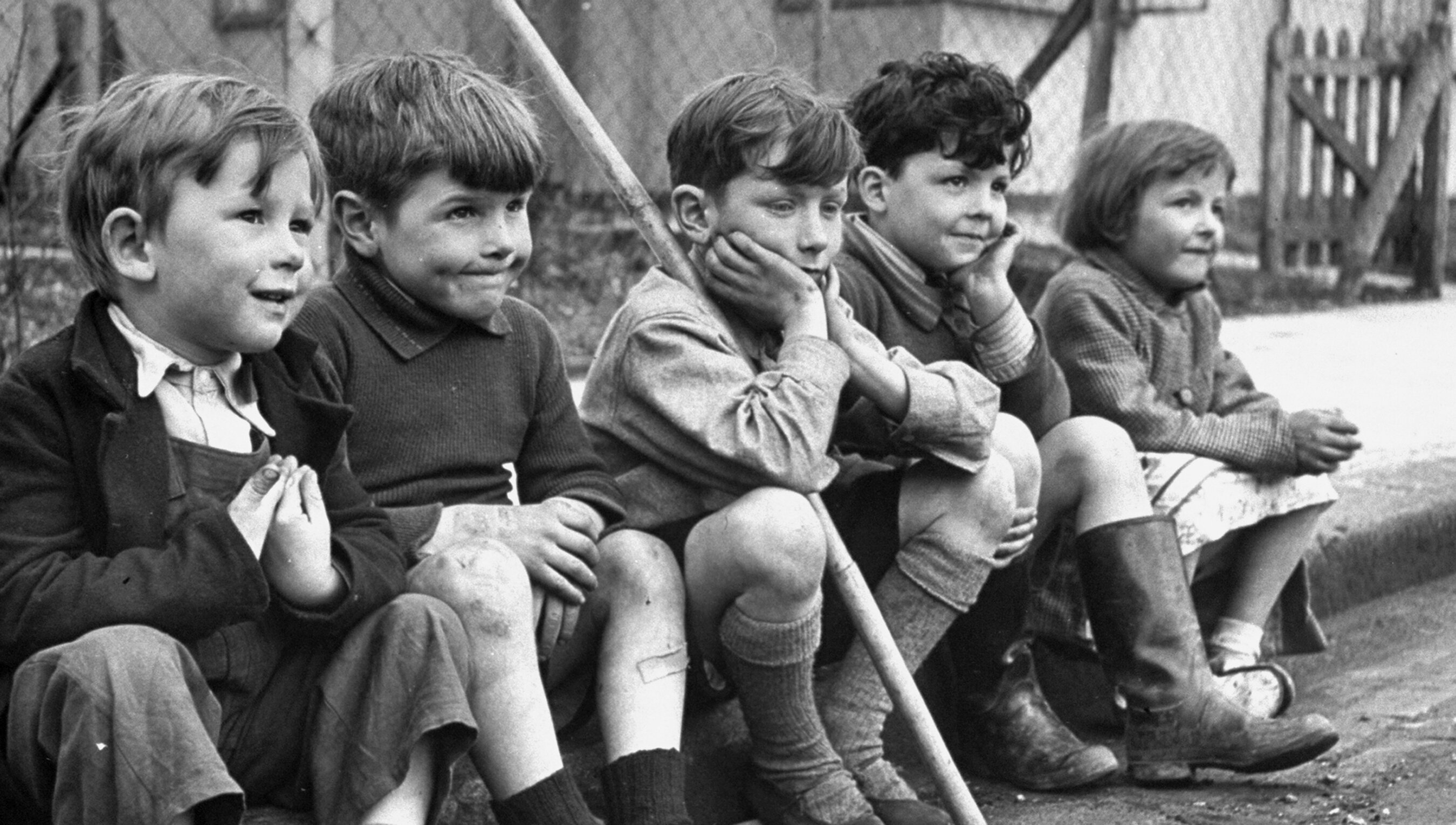 Working class children in London in the 1950s. Photo by the Time Life Collection/Getty

Working class children in London in the 1950s. Photo by the Time Life Collection/Getty

is a philosopher and social scientist, and a roving lecturer who most recently taught at the Free University of Berlin. He is currently writing a book on the Marxist theory of ideology.

A year ago, I was having a conversation with a 13-year-old girl about knowledge. She had looked up from her phone to add her voice to a family discussion in which I argued that knowledge was both different from information and also more valuable. She didn’t agree. I was impressed with her intelligence and her precociousness at taking on the arguments of a doctor of social science, and so I listened as she insisted that information and knowledge were the same thing. But they most surely are not.

An analogy is the difference between ‘self-help’ literature and rigorous social science. The former, like information, exists as unmediated data; it involves the digestion of large amounts of unexamined facts as experienced by individuals. The latter, like knowledge itself, begins with aggregated data and techniques of thinking developed by many persons over time.

Knowledge emerging from social science begets hypotheses for further research, as when sociologists understand the self as part of a symbolic universe of meaning, and then examine changes in that universe. Ontology is the branch of philosophy that examines questions of being and identity; so, put in philosophical terms, social scientists start with ontological evidence and theories, since it is first necessary to know what a self is socially, politically, economically, culturally and psychologically, before giving advice on improving that self.

By way of example, look at self-help in the career arena. In his perennially bestselling self-help book What Color is Your Parachute? 2020 (first published in 1970), Richard Bolles tells readers seeking career direction to ask: ‘Who am I?’ To help answer the question, he draws on personal, anecdotal and parabolic experience, producing motivating guidance that sounds like a sermon. And indeed, Bolles was an Episcopal minister. While he rightly suggests going deeper than merely defining oneself by one’s job, Bolles removes the concept of the individual self from the social context.

This kind of approach can end up relying on regional or ethnic bias. For instance, social psychology reveals that individualism can vary with ethnicity. Asian-Americans might be less comfortable with blatantly individual behaviour than Americans of European origin. Yet reluctance to engage as fully in individual behaviour might reveal more knowledge of the community and society at large. The 20th-century sociologists Émile Durkheim and George Herbert Mead understood the self entirely as a product of the social forces around it. In opposition to this, the self-help literature serves up a self outside a social context, making it truly at odds with social science research.

In one exercise, Bolles asks readers to draw seven petals of a flower, with each petal naming a different aspect of that reader’s personality. This kind of self-knowledge, Bolles argues, leads to more satisfaction and better performance in the workplace and in one’s career. But social influences aren’t analysed at all.

The British documentary film series Seven Up! (1964) illustrates what happens when one gives short shrift to the element of class in defining the self. In the series, 14 British schoolchildren from different economic classes are filmed and interviewed about themselves every seven years of their lives, beginning in 1964, when they were seven years old. The most recent film in the series was made in 2019, when the participants were 63 years old. What emerges is not so much any individual traits they possess but rather that the problems they have, the paths they take in life, and the success of their attempts at financial gain are all consistent with the class into which they were born. Over the course of more than 50 years, none of these individuals transcended their economic class, yet their narratives were consistently delivered through a personal lens.

Louise Woodstock, a media and communications scholar who has researched self-help literature, notes that ‘narratives about the self … place a tremendous power in and responsibility on the self, just as they deny the influence of social structures’.

Implicit in the flower exercise of What Color Is Your Parachute? – and in much of self-help literature but also social science – is the idea that the self is a story, and that that story can be told. But social scientists, including psychologists, and self-help authors tend to tell a different type of story about the self. For instance, Dale Carnegie, author of the self-help book How to Win Friends and Influence People (1936), describes getting another person to do something by tuning into and then addressing their desires. However, one widely referenced psychology study from 1995 showed that people were more likely to be dissatisfied with their attempts at influence when the other person was happy with the outcome. And the plot thickens. This same study showed that negotiators felt less honest and less honourable when successful in negotiations. This flies in the face of How to Win Friends and Influence People, since it questions the assumption that one will feel more successful if the person one wants to influence is made happier or gratified.

Yet much of the self-help literature on economic and career success is still written in the vein of Carnegie’s book, and consequently reads as if one were always a free agent negotiating for (and with) oneself without a social context. Another author unhindered by social context is Mark Manson, who wrote the bestseller The Subtle Art of Not Giving a Fuck (2016). Manson takes umbrage with the modern focus on self-esteem and our sense of ‘entitlement’. But this perspective is personal. In Manson’s worldview, self-esteem quickly becomes entitlement and then narcissism. What is overlooked is the unwarranted focus on self-esteem that’s been so popular in narratives of the past several decades. Social science research shows that a person’s self-esteem doesn’t necessarily explain his or her accomplishments. Beyond that, leaping from inflated self-esteem to entitlement, as Manson does, serves to promote questionable social agendas, for example undermining social welfare programs while promoting welfare-for-the-wealthy through mechanisms such as public-private partnerships.

Like Manson’s implicit description of the individual, other self-help narratives about success and failure consider economics as a purely personal or household strategy. In Awaken the Giant Within (1991), Anthony Robbins advises us to think of what he calls ‘compounding’, which is really a strategy for saving that involves reinvestment of profits. A social scientist covering the same territory would likely first look to national trends or demographics. For example, in the United States, the purchasing power of a dollar has declined every year since 1967 except for two. Statistics from the International Monetary Fund show that, around the time Robbins’s book first came out, actual household savings rates had begun a 20-year-plus decline in the US, the United Kingdom, Australia and Canada. Crosscultural or transnational differences are often the focus of social science studies and, as it turns out, the specific society in which one saves is an important factor in whether one saves: saving in the US occurs at lower levels than elsewhere because, according to some economists, the culture is one of high consumption and immediate gratification, and decisions to save are easier to put off to the future.

Robbins might argue that if more people had read his book, more might have practised compounding. By contrast, one can imagine an academic social scientist beating around the advice bush and merely stating the facts of saving. It’s no surprise that works of self-help are more immediately appealing – they give a sense of personal control and excitement in the choices we make in our financial and career lives. Having the power to save enough money to change our fundamental terms of existence is attractive, indeed.

One reason for saving is to have the money set aside to make job or life changes when necessary or desirable. Bolles’s question ‘What colour is your parachute?’ refers to the decision to change or launch a career based on the inner self, alone. Social scientists, however, want to know the conditions under which parachutes acquire a colour; we feel it essential to know why a parachute is red or black or green; we want to know what forces made us jump; we want to know what kind of cultural, historical, social and economic changes have occurred over time that produce individuals who need parachutes, and how these conditions are changing. Of course, sometimes a self-help approach is what we need. Social scientists have played more of a descriptive than an advocacy role. When it’s time for ‘change agents’ and revolutionaries to alter the basic social conditions that keep individuals down, a self-help narrative might energise action best.