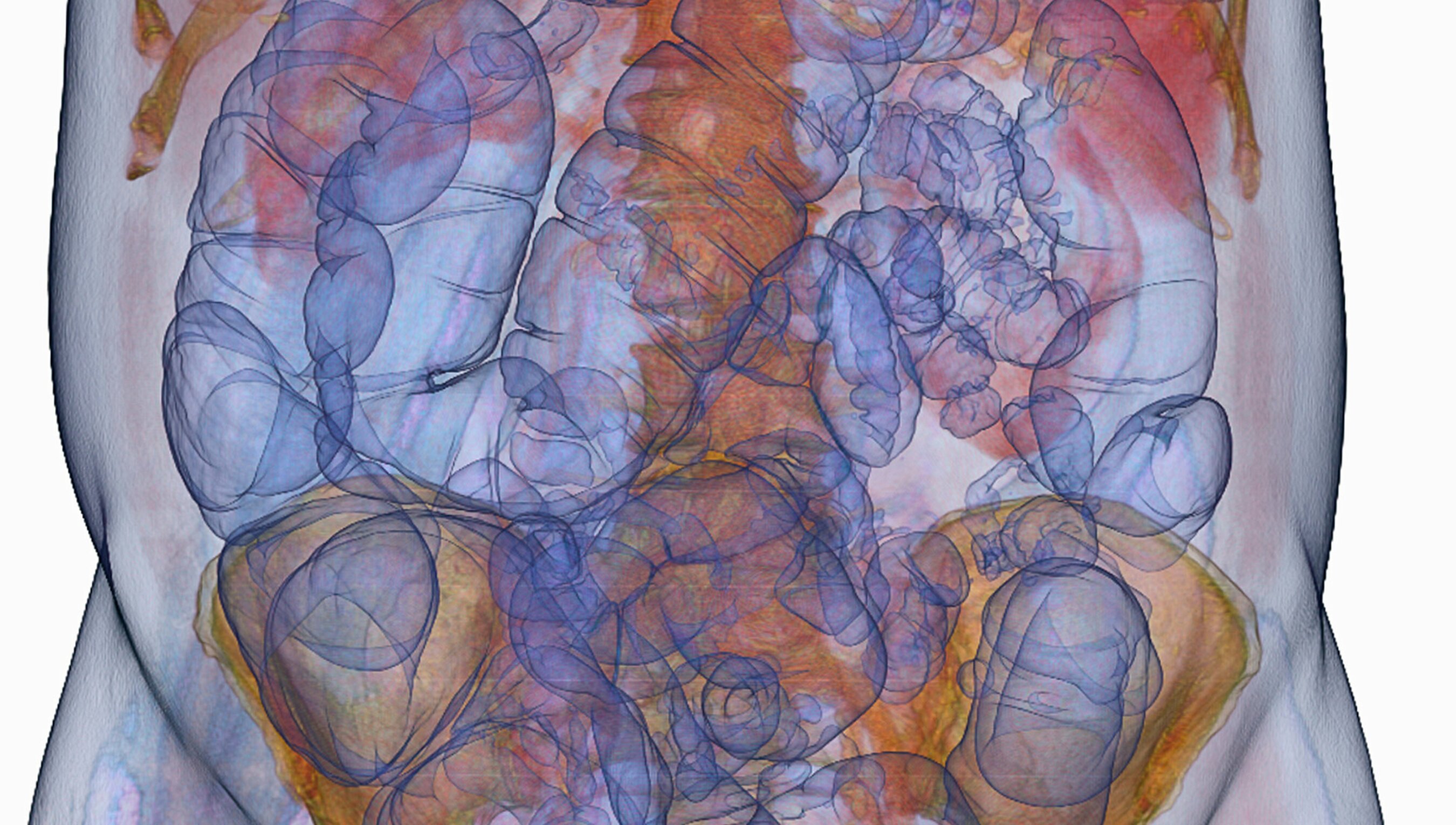 A 3D CT scan of the gut. Photo by Callista Images/Getty

To grasp how serotonin works on the brain, look to the gut

A 3D CT scan of the gut. Photo by Callista Images/Getty

is a systems neurobiologist. He is a Robinson fellow at the University of Sydney in Australia, where he runs an interdisciplinary lab that aims to integrate neuroscience, evolutionary theory and complex systems to understand how neurobiology supports awareness and flexible, parallel behaviour.

If you are driving home from work along a road you’ve travelled numerous times before, your mind is likely to wander. You might become absorbed by a great conversation on the radio, or start rehearsing for an important meeting the next day. You steer your car down your usual route in a largely automatic way, without having to pay deliberate attention to the steering wheel, the subtle movements of your feet on the pedals, or the ever-changing traffic conditions around you. Yet if you encounter a sudden cognitive challenge, such as an unexpected road closure, you are quickly able to shift gears, identifying a new route home via a side street that you rarely use.

This kind of shift toward more deliberate thinking happens in a variety of different situations: for instance, when you have to carefully search for the solution to an especially tricky crossword clue, or think of a new way to frame an argument to change a stubborn friend’s mind. How the brain balances between the cognitive modes involved in these scenarios – relatively automatic processing and more deliberate processing – remains poorly understood, which suggests we need new ways of thinking about it.

It’s instructive to start by considering the kinds of features in our brains that might help us handle challenging multitasking situations. Firstly, we need to be able to learn all the ins and outs of a particular challenge – otherwise, how might we anticipate the next step in a complex sequence, like driving along a road occupied by other cars and pedestrians? We also need to be able to process all the information related to the task at hand, without it seeping over into another process we’d like to run in parallel – otherwise, we might allow a crescendo on the stereo to affect whether we swerve our car’s steering wheel into oncoming traffic. In addition, we’d like to be alerted when any process we’re allowing to run on its own goes awry. Deprived of this control, we’d plough right through a red light or fail to notice a pesky detour sign.

None of these complex functions are controlled by a single neural structure. Rather, they are emergent properties of the interactions among widespread regions in the nervous system. There is ample evidence that coordinated interactions between the cerebral cortex and the thalamus allow us to link opportunities for action (such as a steering wheel and pedals) with goals and plans (driving a car to get to the store). However, these two major neural systems don’t work alone. For instance, both structures are strongly connected to the cerebellum, a massive structure at the base of the brain. The cerebellum creates a high-resolution copy of the actions that we take in a given context, and then learns to recombine features of the situation and our planned action into the best response for what to do next in that situation. In contrast, inhibitory circuits within the thalamus and cerebral cortex are better suited for ensuring that different sequences (eg, steering the car and listening to music) don’t blend into one another.

The ability to control the balance between automatic and deliberate processing is well suited to the neuromodulatory arousal system. This system is made up of nuclei (collections of nerve cells) that project widely throughout the brain, wherein they release neurochemicals that change the way that different regions interact. Based on their widespread connectivity, these structures provide modulatory control of all of the other processes. For instance, the neurochemical noradrenaline controls key features of arousal, whereas dopamine is more important for motivation.

What if we use the gastrointestinal system as an analogy for how the brain uses serotonin?

With this perspective in mind, which neurochemical system is the most crucial for controlling the balance between more automatic and more deliberate cognitive processing? Based on previous research, my colleagues and I had a hunch that the serotonergic system might be a good place to look. Serotonin is released into the brain from multiple different nuclei, including the raphe nuclei and the medullary reticular formation. Once released, serotonin has an extremely complex set of effects, as there are a wide range of different serotonin receptors that can turn the presence of the neurochemical into different cellular outcomes. In fact, researchers have struggled to produce simplified explanations for the system that capture all of its inherent complexity.

My collaborators and I found a new way to tackle both the serotonin and cognitive-mode problems. We started from an interesting fact: more than 95 per cent of the serotonin in the body is actually used by the gastrointestinal tract. Serotonin released in the gut controls peristalsis, the involuntary muscle movement that pushes along the contents of the digestive system. So, we wondered: what if we use the gastrointestinal system as an analogy for how the brain uses serotonin? Instead of digesting (ie, processing) food, what if serotonin was being used by our brains to digest information – that is, to process information flow between the distributed circuits of neurons required to identify, decide and act?

Any time there is a problem to be solved or a decision to be made, our brains must figure out which resources to deploy to meet the challenge. It stands to reason that the brain would like to use tried-and-tested approaches as a first pass. When you reach for a mug of coffee on the table, you use a normal grip that is consistent with the shape of a typical mug. If this simple approach works, you’ve freed up the rest of your brain to focus on other tasks (such as talking to a friend). The cerebellum, which is responsible for executing well-learned actions such as this one, is absolutely doused in serotonergic inputs that increase its ability to provide rapid, precise feedback to the cortex. In the cortex, serotonin also acts to inhibit cortical output via inhibitory 5-HT1 receptors – effectively signalling that the cerebellum can digest the information without any cortical help.

Through these processes, serotonin helps the brain continue with an automatic or habitual approach to a situation when that seems to be working well. This is analogous to digestion: if the food you eat can be broken down easily, serotonin will help to ease its passage through the typical digestive process.

Sometimes, however, the in-built approach fails. Maybe the mug is oddly shaped, or turned away from the easy reach of your grasp. Or, going back to the driving example, your usual route home is closed off. In these instances, excitatory 5-HT2A receptors in the cortex are poised to take over. These receptors – which are activated by serotonin – coat excitatory pyramidal cells in the cortex and boost context-specific inputs to the cells. In this way, serotonin increases the range of different cortical cells that can be used to solve the problem at hand – eg, to figure out a way to grasp the mug or to make your way home. This idea maps on to the situation in the gut. If there is a blockage (perhaps caused by overindulgence at a fondue party), then the gut can turn up the peristalsis to deal with it. We envision an analogous situation with cognitive problems: if there is a blockage (eg, your initial approach doesn’t work), then you need to create new options for solving the problem.

Why should serotonin play this role in cognitive processing, and not some other neurotransmitter? The answer, like many in evolutionary neuroscience, is difficult to pin down, given how much time has passed since the events that catalysed this putative function. There’s nothing particularly special about serotonin compared with other neuromodulatory chemicals, such as dopamine and noradrenaline. They each arise as metabolites of food products and use similar types of cellular mechanisms to enact change in the nervous system. Simply put, they were likely the kinds of fodder that were around when animals (or perhaps single cells) needed a means for conveying a simple message (eg, We just ate, it’s time to digest) to a complex system of interconnecting parts. What was striking to my colleagues and me, however, was just how cleanly the idea of digestion and satiation mapped on to the language of cognition, and how fitting the new framing seemed to be for thinking about what serotonin might do (and not do) when the system is pushed to its natural extremes.

This perspective could help to make sense of some other effects of serotonin. For instance, the active component of many psychedelic drugs is the activation of the excitatory 5-HT2A receptor, albeit in ways that alter the typical timescales upon which the receptors normally act. The effect could be a bit like the brain acting as if previously learned solutions to problems aren’t feasible, and doing so in a manner that is mismatched to the current situation – you could be sitting quite comfortably on your couch listening to music, but experience altered visual perceptions induced by the sounds you hear, causing you to process the song in a completely new way. This viewpoint is consistent with a range of recent imaging and modelling projects showing that psychedelic agents heighten coordinated activity around the brain, helping to explain the integration of sensory experiences across different modalities.

Similarly, our perspective could help to reframe long-standing problems in psychiatry. For example, individuals who compulsively focus on negative thoughts might be viewed as suffering from a state akin to cognitive ‘constipation’. One possibility is that liberating serotonin in their brains (via commonly prescribed SSRIs) may contribute to a state of information-processing flux that opens up a set of possible options, potentially allowing individuals to reappraise situations that they had otherwise responded to relatively automatically. (It’s worth noting, though, that conditions such as depression have complex causes and are not due simply to low levels of serotonin.)

In contrast, chronically heightened levels of serotonin in the brain might be conceptualised as cognitive ‘diarrhoea’ – even when all the problems (food) have been digested, there might still be a high amount of functionally unnecessary cogitation (peristalsis) that leads to dysfunctional brain states.

Rather than attempting to solve these complex psychosocial problems, my colleagues and I simply hope that this novel perspective on the function of the serotonergic system opens up avenues for new ideas and treatments. For now, you might use it to reframe how you think about your own brain. The next time you’re driving home in a car or sitting down to enjoy a meal, spare some thought for the ways in which the neurochemical soup in your brain mimics your gut: helping you to digest complex patterns of information as you navigate the intricacies of your daily life.