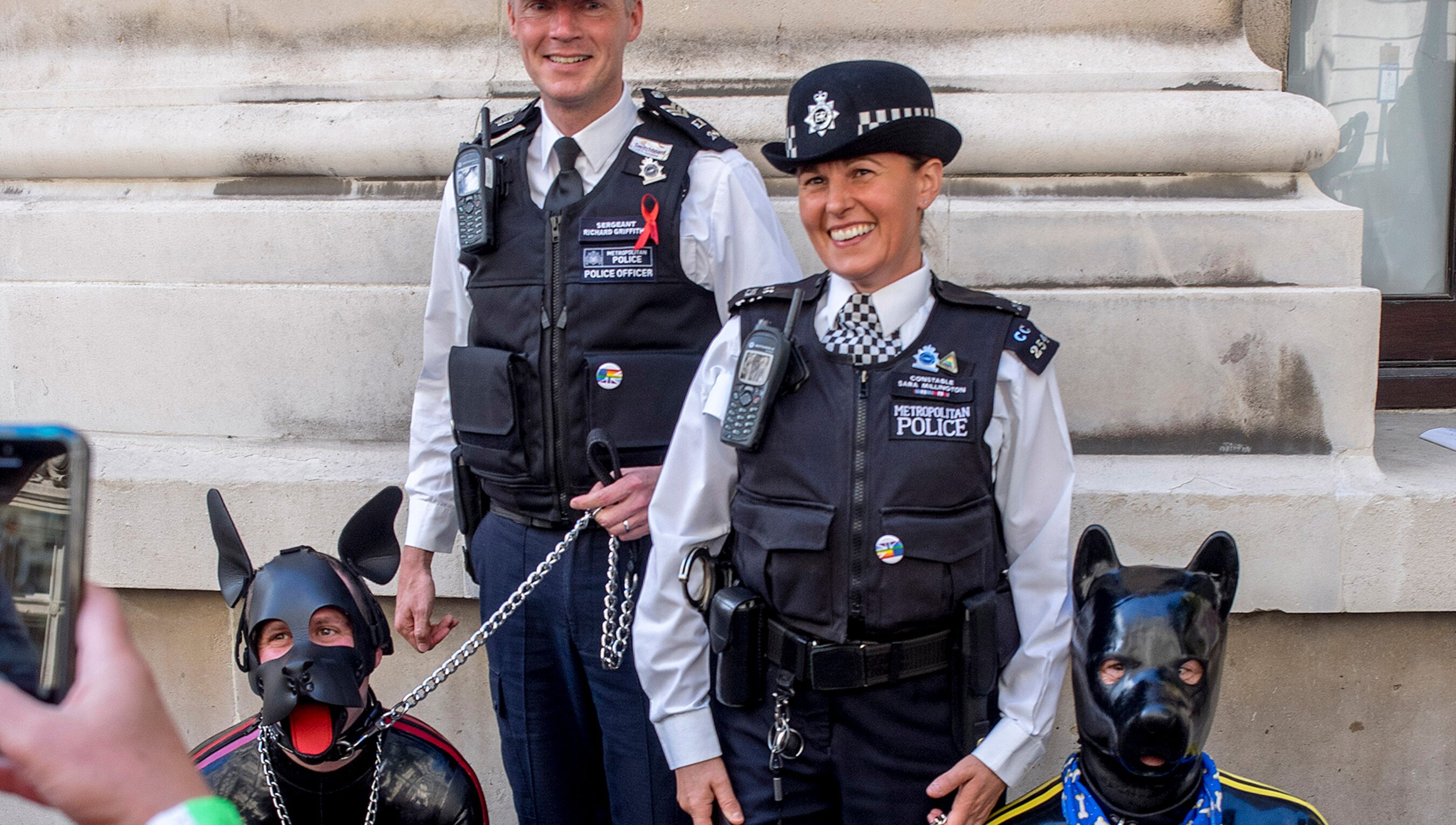 Officers from the Metropolitan Police at the Pride march in London 2016. Photo by Bruno Barbey/Magnum

Toleration is an impressive virtue that’s worth reviving

Officers from the Metropolitan Police at the Pride march in London 2016. Photo by Bruno Barbey/Magnum

is a freelance writer and philosopher. He is a former SIAS Fellow at Yale Law School. He has taught and published on a wide range of topics including the philosophy of love, the nature of value, media ethics, and the philosophy of psychiatry. He is the editor of Reading Bernard Williams (2008). He lives in Lincolnshire, United Kingdom.

Suppose that I am polyamorous and that my mother disapproves. She tolerates my love life but thinks it’s wrong that I have not one partner but two. What her half-accepting, half-critical attitude reveals is a duality at the heart of toleration, an ambivalence that is beautifully captured by the British philosopher Bernard Williams (1929-2003). Toleration, for Williams, is a central ingredient in thinking through ‘what coexistence under conditions of fundamental disagreement requires’ (to use a helpful phrase from the philosopher Teresa Bejan).

To tolerate, as Williams stresses, is to be conflicted. Toleration involves putting up with something that you would rather not be the case. This doesn’t have to involve moral disapproval: perhaps you just can’t stand your colleague’s taste in music. But toleration is likely to be especially hard when what you experience is moral disapproval. After all, if you think that something is wrong, why not try to stop it happening?

Consider what is called for when one group of people in society (perhaps members of a religion) are asked to tolerate behaviour (perhaps polyamory) they consider sinful. Williams offers the following analysis:

They will indeed have to lose something, their desire to suppress or drive out the rival belief [eg, in polyamory]; but they will also keep something, their commitment to their own beliefs, which is what gave them that desire in the first place.

For Williams the virtue of toleration is an impressive and hard-to-sustain achievement. You might think that toleration is entirely passive, but as Williams shows, it is both active and passive. You have to actively sustain your moral beliefs at the same time as you actively resist acting on them. If you stop caring, you’d no longer be tolerant, merely indifferent.

Toleration, laced as it is with disapproval, can still be something to welcome and celebrate

The English novelist Anthony Powell (1905-2000) liked to distinguish (borrowing a line from the 18th-century Methodist cleric John Wesley) between agents and patients: those who do things in life, and those who let life happen to them. It is tempting to put the tolerant in the latter camp – the tolerant as patients, the putter-uppers of the world – but Williams’s analysis brings home the crucial active element in toleration.

This is not to deny toleration’s ongoing association with weakness and passivity. Toleration, for radical critics such as Wendy Brown, is what might be called a status quo value. Those desiring wholesale social change are understandably suspicious of calls for restraint and don’t-rock-the-boat approaches to conflict. But toleration need not always point in a conservative direction. After all, if activists can be asked to tolerate statues of slave owners, then so can those who would keep the statues be asked to tolerate their removal.

Why might a parent tolerate their child’s love life even though they believe it immoral? One familiar answer is that they believe it is up to their child to decide what kind of romantic life they lead. The parent is torn between valuing their child’s freedom to decide and their moral objection to what their child is deciding to do with this freedom. I am in the same ambivalent state when I cherish your freedom to speak when I think that what you are saying is morally wrong. As Williams remarks: ‘The belief in toleration as a value, then, does not necessarily involve a contradiction, but rather that familiar thing, a conflict of goods.’ The tolerant parent is morally conflicted but not necessarily incoherent.

Toleration as a virtue flirts with paradox by suggesting that there is something positively good in allowing something bad to go on. But, as we have seen, for Williams, this air of paradox is removed by the introduction of the value of liberal autonomy, which is to say valuing people’s ability to freely make their own decisions and to live accordingly. The ambivalence experienced by the tolerant involves a conflict between valuing freedom, and rejecting the moral content of what is done with that freedom. What results, at the heart of toleration, is mixed feelings. We could sum it up in a familiar phrase: you’re free to choose but I wish you hadn’t chosen that.

Williams’s diagnosis of the ambivalence at the heart of toleration is in keeping with his more general recognition that, as the American political philosopher Sharon Krause puts it in discussing his work, ‘internal dividedness on moral questions and the feeling of regret are common’.

Notice that you can feel ambivalent as the recipient of toleration too. Suppose I book a hotel room in one of the many countries where being gay remains a criminal offence. Let’s say that I hear, via a friendly staff member, that the proprietor is tolerating my homosexuality. I might understandably be a bit upset. What’s his problem? What I would be rightly picking up on is the fact that his toleration contains within it moral disapproval, and that’s what bothers me. What I want from him is acceptance and respect. However, if I come to understand that the owner is genuinely tolerant, I still have reason to be glad, even grateful. He is not, after all, simply putting up with me because he thinks he can’t stop me. He sincerely believes in my freedom to decide what goes in the area of sexuality. Toleration, laced as it is with disapproval, can still be something to welcome and celebrate.

How much evil can we tolerate in the name of avoiding greater evil?

The former British Labour Party leader Jeremy Corbyn Tweeted in June 2019: ‘I don’t like the word tolerance. I don’t tolerate somebody. I respect somebody …’ The British satirical magazine Private Eye pointed out that this was inconsistent with earlier Tweets of his in support of toleration. But we know what Corbyn meant: toleration isn’t the same as respect. Many social movements have rightly pressed the claim that toleration is not enough. What is needed is respect and acceptance. But in pluralistic multi-faith societies, where people have widely different views over many areas of life, we have reason to revive and cultivate an understanding of what makes toleration nonetheless a virtue.

There is, however, quite a sting in the tail. Williams puts regard for individual freedom at the heart of toleration and captures brilliantly ‘the respect for autonomy that underlies toleration as a virtue’. It’s ironic, then, that in practice he thinks ‘the pure spirit of toleration’ is of only limited use. Partly, this is because there will be disagreements about what to tolerate under the heading of personal choice. But, more fundamentally, not everyone will value individual freedom very highly in any case. Appealing to the value of liberty, after all, is only going to go so far when in conflict with people who have a non-liberal perspective.

Williams, as a result, ends up distinguishing between toleration as a liberal moral virtue, and toleration as a political practice. There are many reasons, Williams suggests, for non-intervention in the lives of others that do not rest on such high-minded considerations as respect for personal liberty or autonomy. One obvious reason for tolerating objectionable behaviour is basic uncertainty about whether intervention will improve the situation or not. What is significant about such situations is that you do not have to see any freedom at stake or anything good in itself about toleration. Perhaps you just have to put up with something for want of a better alternative.

Williams’s version of toleration is pragmatic rather than principled. What is needed for a tolerant society, he felt, is not only – or even primarily – a single liberal virtue but rather ‘all the resources we can put together’. These include positive elements such as ‘the desire to co-operate and to get on peacefully with one’s fellow citizens and a capacity for seeing how things look to them.’ But most of all, for Williams, it involves a healthy sense of what life looks like when mutual toleration breaks down.

His perspective owes much here to the influence of the 17th-century English philosopher Thomas Hobbes and the 20th-century non-utopian thought of the American philosopher Judith Shklar. What we should focus on, for these thinkers and for Williams, is not achieving the best outcomes but avoiding the worst. What we need to avert is a world of escalating cruelty and tit-for-tat violence. What can inspire toleration, quite sensibly, is fear.

Williams was, as usual, shrewd here. But this pragmatic stance is not without its own risks – risks of a fundamentally moral kind. How much evil can we tolerate in the name of avoiding greater evil? Williams did not think there was any formula or list of moral rules that you could consult for an answer.

The question of whether to tolerate and when to intervene relies inescapably on wise perception and judgment. Williams the realist recognised that force also had to be taken into account. We can desire peace, and we can warn against fanaticism, but sometimes, unavoidably, what is needed is ‘power’ to provide ‘reminders to the more extreme groups that they will have to settle for coexistence’.