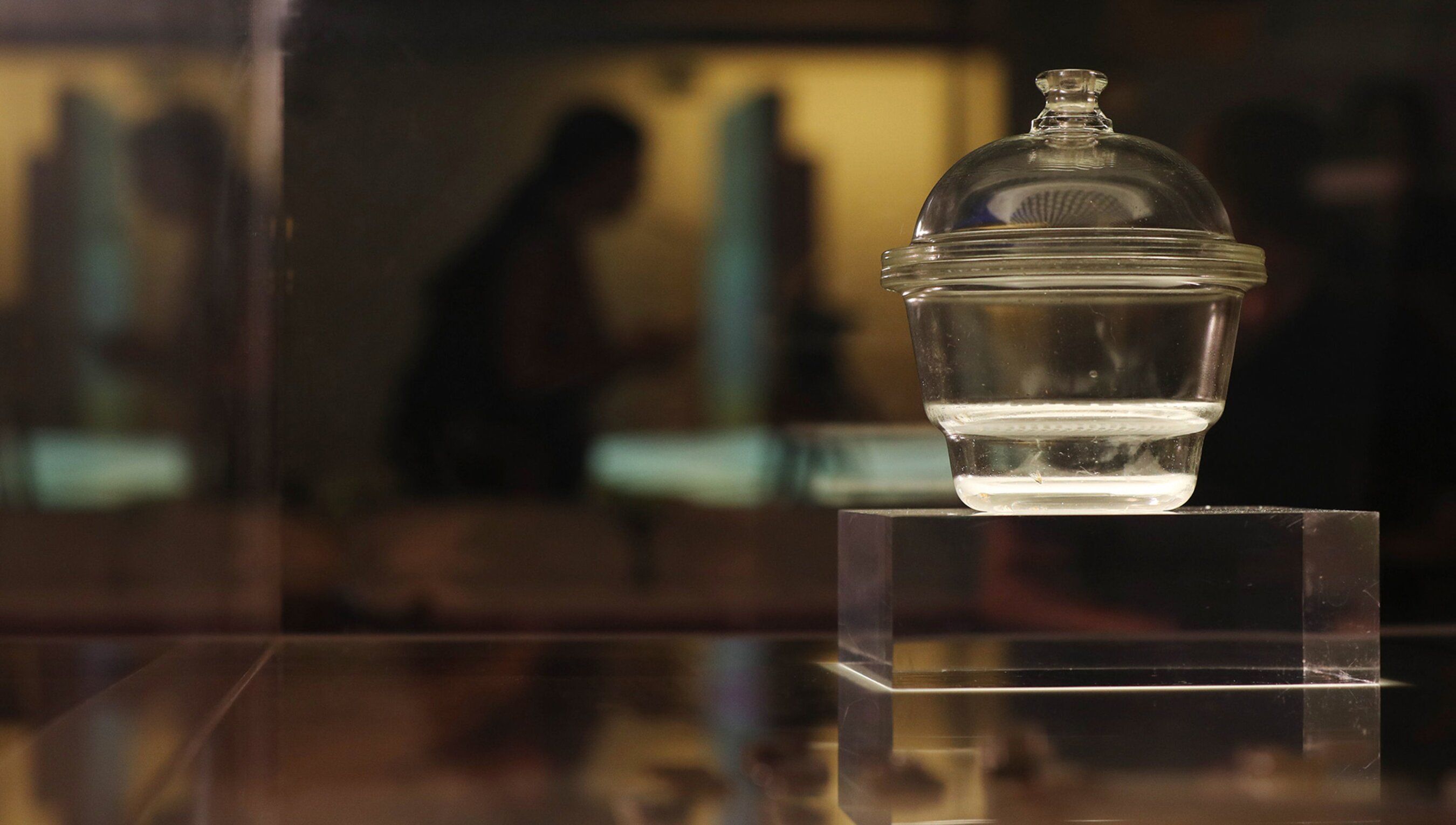 The desiccator in which Louise Brown, the world’s first ‘test tube baby’, was created. Photo by Jonathan Brady/PA/Getty

When does a human embryo have the moral status of a person?

The desiccator in which Louise Brown, the world’s first ‘test tube baby’, was created. Photo by Jonathan Brady/PA/Getty

is a science and health journalist based in the UK. He has a PhD in neuroscience from the University of Cambridge and has written for newspapers, magazines and broadcasters worldwide including BBC News, The New York Times, Wired, TIME magazine and The Guardian.

On 25 July 1978, the birth of a baby at a hospital in Oldham in England was greeted by the public and medical community alike with an intense mix of celebration and consternation. Heralded as the world’s first ‘test tube baby’, little Louise Brown was born by in vitro fertilisation (IVF), a then groundbreaking technology that involves an embryo being created from an egg and sperm in a Petri dish, before being implanted into the potential mother’s uterus.

The technique offered new hope to millions of infertile couples around the globe, but it also sparked fears of a dystopian future. Writing in The New York Times in 1974, the American journalist and novelist David Rorvik had set the tone for future critiques by referencing Aldous Huxley’s Brave New World (1932) with its ‘test-tube babies on an assembly line’. For an anxious public, visualisations of miniature humans being artificially manufactured seemed deeply disturbing. According to Rorvik, even the Nobel biologist and co-discoverer of the DNA molecule, James Watson, decried the rise of IVF, telling a congressional subcommittee that the technology would see ‘All hell break loose, politically and morally, all over the world.’

As early as 1979, regulators responded to these concerns by establishing the ‘14-day rule’. It soon became an internationally accepted regulation in reproductive medicine: a legal and ethical guideline that prohibited scientists from sustaining human embryos in the lab beyond 14 days. But now the voices calling for the rule to be extended are growing ever louder. In the past three years, scientists in diverse fields of medical science, ranging from fertility to cancer biology, are asking today’s regulators to reconsider whether the rule should be revised.

Although the 14-day rule doesn’t directly affect the process of IVF, which usually involves embryos being grown artificially for up to seven days after fertilisation, it does impact researchers’ ability to investigate the reasons why IVF can fail, which happens on average 70 per cent of the time. Such failures often come at a significant financial and emotional burden to prospective parents. However, exactly why the rate remains so high, more than 40 years after IVF was first developed, is still something of a mystery.

Reproductive experts argue that extending the 14-day rule to 28 days would provide a window for understanding how IVF can go wrong, and why some women are more prone to this misfortune than others. They also point out that extending the 14-day rule would allow for more research into how to put unused embryos from IVF clinics to use for the greater good, rather than seeing them destroyed as can happen now.

However, these scientific arguments must be weighed against the social, moral and ethical qualms that various members of the public have about human embryo experiments. Prominent religious organisations, such as the National Catholic Bioethics Center in Pennsylvania, oppose human embryo research at any stage, believing that embryos are deserving of full human rights from the moment of conception. Surveys have shown that some people accept embryo research up to a certain point, but feel uncomfortable about extending it beyond 14 days, given that this milestone represents the point at which an embryo becomes a distinct individual, in the sense that it can no longer split into twins or triplets.

As these arguments rage on, technological breakthroughs in embryo culture that make it easier to keep embryos alive in the lab for longer are putting greater pressure on the 14-day rule. For decades, the rule was relatively academic. In reality, sustaining an embryo outside of the human body beyond seven days was long considered a near-impossible feat. But this has begun to change. In 2016, scientists in both New York and Cambridge grew human embryos for 13 days, pushing against the limit of the regulations. Then in November 2019, a group of scientists at the Yunnan Key Laboratory of Primate Biomedical Research in the Chinese city of Kunming published a study that sent reverberations throughout the world of reproductive medicine – they’d successfully cultivated monkey embryos for 20 days.

This was uncharted territory for the field of embryo research. It offered tantalising hints at the kind of questions that could be answered by growing human embryos for longer. Days 14 to 28 have long been known as the ‘black box’ of human development, one of the most critical and little-understood phases of embryonic growth. The earliest formations of major organ systems begin during this period, including the heart and nervous system, and it’s also a period where defects tend to occur. Studying what can go wrong during this timeframe could help to explain why the IVF failure rate remains so high, and also why up to 20 per cent of unassisted, known pregnancies end in miscarriage.

Allowing the study of human embryos beyond 14 days could also have implications for treating infertility. In recent years, scientists have successfully generated egg and sperm cells from patients’ stem cells (cells that have yet to differentiate into more specialist types of cells). The idea is that it might one day be possible to use these lab-grown gametes to create an embryo. But before this technology can be trialled for real, scientists want to be sure that any embryo created in this way develops normally. Being able to grow embryos for 28 days would help ensure the safety and efficacy of these techniques.

Beyond reproduction, a 28-day rule could also facilitate research into the treatment of illnesses thought to have their origins in the first few weeks of life, such as certain hereditary cancers (caused by inherited mutations, which first begin to express themselves around embryo day 17) and Huntington’s disease (while the symptoms of this condition usually develop between the ages of 30 and 50, researchers believe the effects of a mutation in the Huntingtin gene actually begin during early embryonic development).

So, the benefits to human health of extending the 14-day rule could be sizeable, but those who oppose the change fear that it will be a slippery slope towards an ever-increasing time window for human embryo research, and also lead to the approval of other reproductive technologies that remain highly contentious. For instance, concerns were raised at a discussion held by the Nuffield Council on Bioethics in 2017 that extending the 14-day rule could help pave the way for the legalisation of human germline engineering, which would allow clinics to create genetically modified babies via the editing of embryo genomes. Giulia Cavaliere, a bioethicist at Lancaster University, is among those warning that extending the limit for embryo research could risk undermining public trust in scientists and regulators.

Of course, just as the science advances and the arguments rumble on, public opinion doesn’t stand still. Forty years ago, public attitudes towards embryo research were distinctly hostile, but in recent years there have been inklings that perceptions have begun to shift. In a 2017 YouGov poll of 1,740 people across the UK, 48 per cent agreed with an extension to 28 days, 19 per cent wanted to keep the limit at 14 days, 10 per cent wanted a complete ban on embryo research, while 23 per cent were unsure what they felt.

The large proportion of people backing an extension to the rule has been viewed by some scientists as a sign that it’s time for regulators to revisit the topic, through discussions with scientific experts, policymakers, patients who could stand to benefit and members of the public.

However, the poll also shows that the spectrum of public opinion remains diverse, largely because it intersects with the wide range of views people have about the sanctity and origins of human life, and the extent to which they’re prepared to compromise on their moral beliefs in the name of medical discovery.

Some public concerns are easier to address than others. For example, to those who worry that embryos used in research have the capacity to suffer pain or are consciously aware, Martin Johnson, professor of reproductive sciences at the University of Cambridge, points out that even 28-day-old embryos are a long way from the capacity to feel or experience sentience because no functional neural connections or sensory systems exist at that point.

Other qualms about an extension, though, are more difficult to address, such as fears that extending the rule to 28 days would pave the way for further extensions in the future. There might be some reassurance from the scientists who suggest that, were the 14-day rule to be extended to 28 days, there would be no scientific need for any further adjustments (they argue that scientific questions related to later stages of development could mostly be answered through studying aborted embryos). However, it must be said, other scientific opinions do lend legitimacy to the concerns about a slippery slope. Many scientists believe there is an ethical imperative for the regulations on embryo research to keep pace with scientific progress, particularly if there would be demonstrable benefits for human health. As John Appleby, a medical ethicist at Lancaster University, put it in 2018, in a paper coauthored with the Dutch biomedical ethicist Annelien Bredenoord: ‘Although the 14-day rule is viewed by many as a success … it should not become a dogma in itself. Science is changing and regulations need to adapt.’

In this debate, the ultimate dilemma has to do with the moral status that we attribute to embryos. Some people feel that any embryo, from the point of fertilisation, has the same right to protection as a newborn baby, and so cultivating it purely for research would be wrong. Others maintain that embryos are simply a ball of cells, and so don’t warrant any special rules. Somewhere in the middle lies the gradualist viewpoint whereby an embryo is seen as growing in moral value as it develops, eventually acquiring, at some point before birth, the status of a person.

While the continuing rise of new technologies related to embryo culture will inevitably see pressure grow to reconsider the 14-day rule, regulators will need to consider the various perceptions of what an embryo means to different people. This remains a debate to which there is no straightforward solution. In many ways, it all comes down to whether one considers an embryo to be morally equivalent to a human life – a complex, philosophical conundrum that has no easy answers.