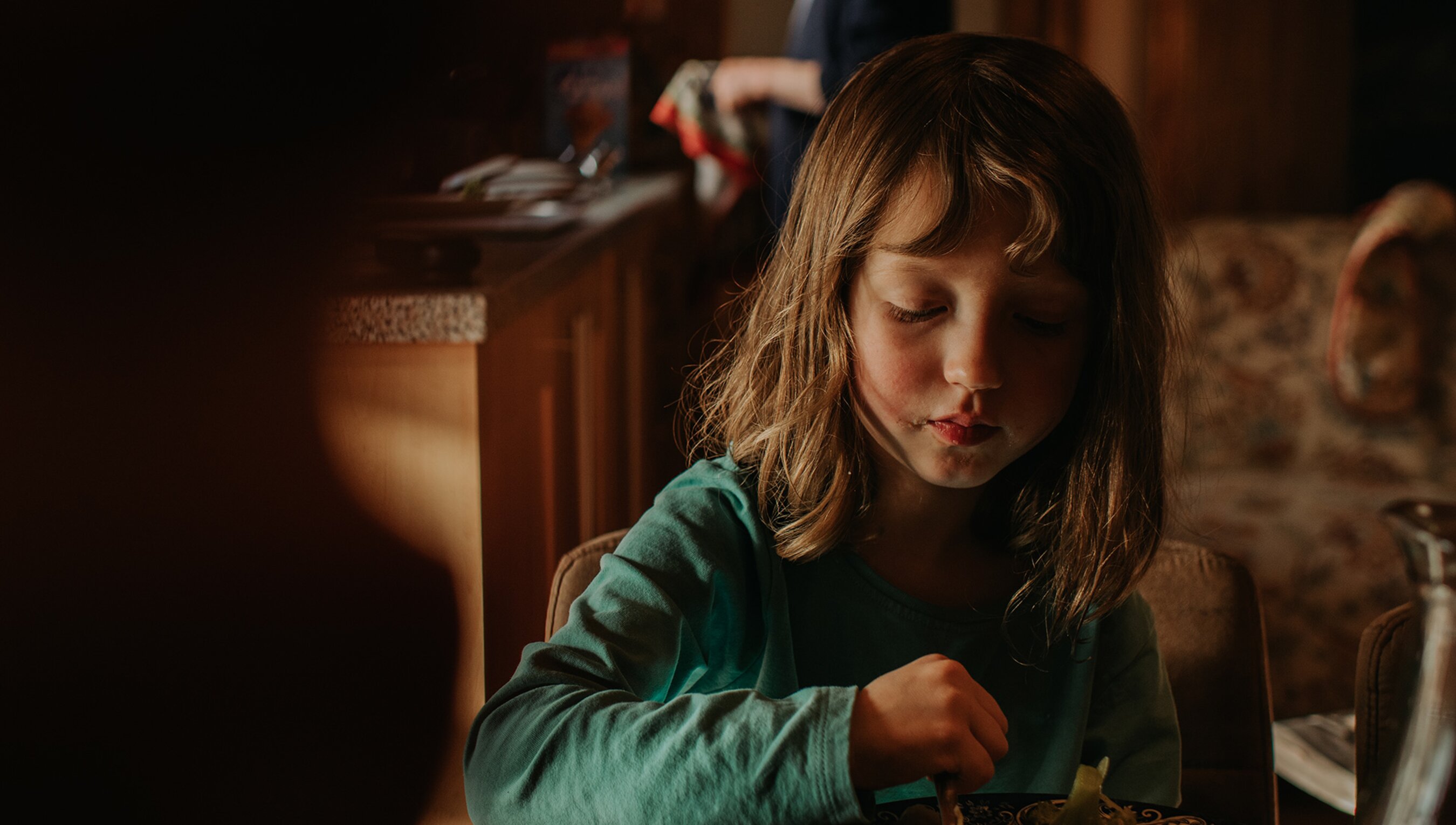 When fear grew in my stomach, I starved myself just to survive

is an author of novels, short stories, essays and book reviews in English and Bulgarian. Her latest novel is Arrival (2022), and her debut novel Four Minutes (2017) was recently translated into English. She lives in London.

My relationship with food was complicated when I was a child. Dinner times were a torture for my mother, worried about my nonexistent appetite, and me, a seven-year-old girl weighing barely 18 kg (39 lb), who dreaded being forced to eat. I’d spend hours at the table, crying in front of a plate of traditional Bulgarian gyuvetch, unable to chew or to swallow. There was a strange sense in my mouth, as if my throat was blocked, while my stomach felt like a dried-up sponge, incapable of absorbing nutrients.

My mother begged me to try a spoonful at least, offered alternative meals, and sometimes raised her voice. ‘Open your mouth or you’ll have to be drip-fed,’ she said. But how could I obey when even the smell of cooked meals made me want to throw up? Living on just a few mouthfuls a day, my body began vanishing before my parents’ eyes.

I experienced stomach pains throughout the day, unrelated to hunger, or so I thought, and triggered by stress of any kind: even the regular assessments at school prompted agonising cramps. Doctors referred me to a number of specialists, who examined my intestines, took blood tests and X-rays, and found nothing. There was no medical reason for my eating difficulties. Instead of searching for their root cause, the doctors prescribed ibuprofen. Some implied I was making it all up to seek attention. My parents accepted these conclusions, stopped taking me to doctors when I complained of stomach pain, and reverted to pacifying my poor digestion with self-researched natural remedies, such as boiled rice water or peppermint tea, neither of which offered relief.

No one imagined I had an eating disorder. In fact, until recently, it never occurred to me either. As far as my family was concerned, I was simply a stubborn child, a fussy eater. Not one doctor asked me questions about my family situation, or made any connection between my eating disturbances and a potential stress factor: one that was reignited every evening in the place every child should feel protected and safe.

Growing up with an alcoholic and physically abusive father, home was never a safe place. Mealtimes were infused with fear of the violence my mother had to endure before my eyes – a punch in the face or a kick in the leg, while she slurped her lentil soup, and a great deal of yelling. Stuck at the table, I didn’t dare say a word or even look at my father’s face, too afraid I’d provoke his aggression. There was nowhere to hide. As a silent witness to all this, my fear grew, multiplied and, with it, my stomach pains too.

It took me 30 years to connect the anxiety I faced in childhood to my eating disorder. It happened after I started therapy sessions for my post-traumatic stress disorder (PTSD). When your body exists in persistent alarm mode, primed to counter incoming threats, systems start to close down, and the digestive system is often first to do so. The body responds to stress by sending out signals such as abdominal pain or inflammation, which defy straightforward medical explanations despite being experienced as violent and disturbing.

I learned that there was a name for my eating troubles; it’s called avoidant/restrictive food intake disorder (ARFID). It’s a lot less talked about than anorexia and bulimia, for example, but the effects of malnourishment as a direct consequence of food avoidance can be equally devastating.

ARFID was first introduced in the fifth edition of the Diagnostic and Statistical Manual of Mental Disorders, or DSM-5 (2013), when the category known as ‘selective eating disorder’ was broadened to include those who limit their eating and are affected by related physiological or psychological problems, but who do not fall under the definition of another eating disorder. Earlier, the diagnostic category was restricted to young children where negative or maladaptive relationships between the child and caregiver were suspected. However, it became evident that adolescents and young adults also displayed feeding issues that did not fit with anorexia or bulimia. There are clear differences. For example, someone diagnosed with ARFID does not have distorted beliefs about their body image or weight.

The name ARFID is often used as an umbrella term linked to a range of food-avoidant behaviours, and sometimes, as in my case, the person may not recognise that they are hungry and may generally have poor appetite. For them, eating is unpleasant: I recall how chocolates received at Christmas would remain in the cupboard for months. I had no desire for any food, not even the treats children my age typically fought over. In common with other people who have experienced childhood adversity, my body refused to eat because, subconsciously, my mind was telling it that I needed to take up less space, and disappear.

Today we understand that eating disorders are complex mental illnesses. And that stressful and traumatic experiences in childhood induce changes in the brain that endure for years to come, manifesting as a physical illness and chronic pain. ‘Experiencing stress in childhood changes your set point of wellbeing for decades to come,’ explained the science writer Donna Jackson Nakazawa in her book Childhood Disrupted: How Your Biography Becomes Your Biology, and How You Can Heal (2015).

‘Eating disorders are about coping; a survival mechanism we have had to develop ourselves’

The stressors need not be so severe as domestic or sexual abuse, or the loss of a parent or sibling. Neglectful or emotionally distanced parents, chronic humiliation, blame or bullying, addicted or depressed parents: all these can have an effect. Once locked deeply in the brain, such experiences can alter individuals’ narratives and encourage harmful beliefs about themselves; ‘I’m not worthy of love’ was the personal myth I repeated over and over.

In my therapy sessions, I look back at my seven-year-old self. I examine how this little girl must have felt, what unhelpful beliefs about herself she carried. I stay with the uncomfortable feelings, and I reach a realisation. In order to hide my shame, hopelessness and fear, I refused to nourish my body, which was physically harmed by my father, daily. To survive the abuse and endure the ongoing pain, my mind chose to dissociate from my body.

I see things more clearly now, especially how damaging it was not to have a diagnosis. In fact, diagnosis remains a challenge even with available research, since patients with ARFID present with complicated and varied histories and risk factors, and no body image concerns. With diagnosis, of course, comes treatment, ideally one that addresses both the body and the mind. Common approaches include cognitive behavioural therapy (CBT), nutrition counselling and feeding therapy, eye movement desensitisation and reprocessing (EMDR) for cases of PTSD like myself, hypnotherapy, desensitisation, exposure therapy or dialectical behaviour therapy (DBT). In my case, growing up in Bulgaria in the 1980s, long before this disorder was understood, this help was not available. I had to unearth my own way to recover.

For the first time, I saw myself through the eyes of someone who cared about me

I find the concept of recovery problematic. The term suggests an intervention or treatment to aid healing, a sort of ‘before’ and ‘after’, and I struggle to pinpoint a particular time that divides my life with such simplicity. Instead, there were multiple steps, multiple situations which led me to better understand myself.

At 14, I stopped eating completely. It was the summer holidays, and I spent most days on the streets with friends. The heat was unbearable, like most August days in Bulgaria, but, though weak from fasting, I still refused to put a bite in my mouth. I remember walking down the street when suddenly the light became too bright, a hot wave engulfed my head and I collapsed on the pavement, losing consciousness. I came to to the sound of muffled voices, and with a woman holding my head, offering me sips of water. A crowd had gathered; everyone looked relieved that I was coming back to myself. And that’s exactly how I felt too: coming back, returning to myself. I walked home, boiled some potatoes, and gobbled them down with an appetite I never had in my life. That was the first step.

Months later, my parents divorced, and my mother, sister and I moved in with my grandparents. I still had to spend some weekends with my father, which terrified me, inducing stomach spasms every time. When I asked in the pharmacy for something to calm my nerves, the pharmacist offered me Diazepam, explaining that I should never take more than half a pill. No prescription needed, no questions asked. Little did I know about Diazepam’s effects and, feeling anxious about the impending day with my father, his yelling and his punches, I took a couple of tablets. I felt nothing, so took a couple more, and then another couple, until half of the blister pack was empty.

I’ve no recollection of the day with my father – it seemed the pills had worked, and I was pleased. I went back to the pharmacy the next week to buy more, and kept on that way, changing pharmacies, taking 10 tablets at a time, sometimes mixing them with vodka to numb myself faster. I took pleasure in the feeling of emptiness, the calmness I never knew before, and started taking Diazepam during the school weeks, too. The days passed in a blur, with no memories, no panic attacks, no fear: they made me feel invincible.

One day, the boy who sat next to me in geography class noticed me taking a few tablets. Feeling dizzy, I left the classroom, and he followed me outside, mumbling an excuse to the teacher. I remember the way he stared at me, worried, his gaze making a sharp incision into my mind, digging for answers. For the first time, I saw myself through the eyes of someone who cared about me. He’d noticed my desperation, noticed me, after so many years of feeling invisible and unworthy. I threw away the remaining Diazepam and never took it again. The second step in my bumpy journey.

The third one took place over a long time, during which I left home for university and relocated to London, and, in a way, it still continues. After my father died, I was left with a million questions reverberating through my head, none of them answered, and anxiety started to build up again. But this time, things were different. I had new friends and relationships, and a support network made up of people who helped me see myself as someone worthy of love. I am far from ‘recovered’. Every time I suffer extreme stress or anxiety, my stomach closes again and my appetite vanishes. I don’t know if I can ever heal the trauma or its effects on my mental health, but I know where to look for support and I find this reassuring. The network of people around me, like an invisible cloak, helps me move forward. And this is all I want to do: keep going, keep moving forward.