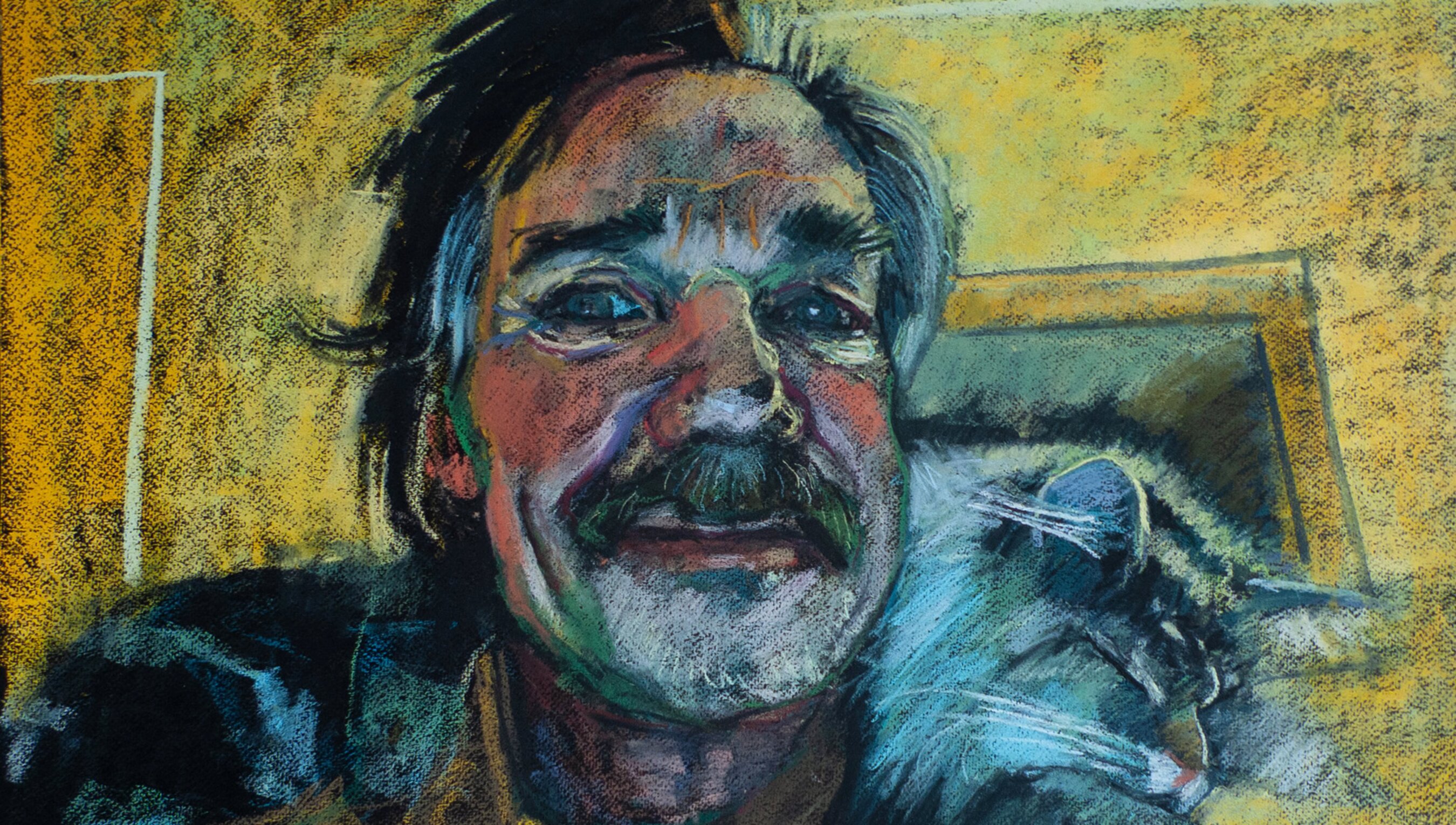 When the mind is dark, making art is a thrilling way to see

is professor of neurology at the University of Exeter Medical School in the UK. His interests lie at the intersection of neurology, psychology and psychiatry. He was chairman of the British Neuropsychiatry Association 2007-2011, and is the author of Consciousness: A User’s Guide (2003) and A Portrait of the Brain (2008).

In the early 2000s, I encountered a patient who had lost his previously active ‘mind’s eye’ following neural complications arising from heart surgery: he could no longer conjure up the faces of family and friends, visualise places he’d visited or imagine scenes in a novel; even his dreams were now without imagery. Before his loss, the vividness of his imagery approached ‘real seeing’ – afterwards he ‘saw’ nothing in his mind, though he could still think perfectly well about objects and concepts, and he functioned well in everyday life.

I was intrigued: visualisation is, for most of us, such a central ingredient of our mental lives, at work in memory, reverie, dreaming, reading, problem-solving and creativity. Think of an apple for a moment. Was it green or red? Shiny or gnarled? Was there a stalk? Could you have used the stalk to twirl the apple on request? If you can answer these questions, or at least they make sense to you, it’s likely that you experience ‘visual imagery’, as most of us do.

Given his deficit, it seemed remarkable that our patient – MX, as we called him – was able to function so well. In fact, MX was an ideal research participant – intelligent, interested, cognitively intact in all respects bar this single, subtle but striking deficit. Using functional MRI scanning, we showed that, while his neural activity was normal when he looked at famous faces, once he tried to visualise them mentally, he failed to engage the visual parts of his brain as you or I would if we engaged our mind’s eye (assuming you can visualise). His presentation matched a disorder of ‘visual imagery generation’ previously described by the American psychologist Martha Farah, drawing on the background work of another psychologist, Stephen Kosslyn. I found MX’s case fascinating and odd, but unlikely to lead much further. Then events, as they sometimes do, took an unexpected turn.

In 2010, the US science journalist Carl Zimmer described our work on MX’s case in the science magazine, Discover. Over the next few years, 21 people contacted me explaining that they’d recognised themselves in Zimmer’s lucid description of MX, but with one difference – they’d never been able to visualise. For as long as they could remember, they’d been aware of this quirk in their psychological nature: while others seemed to have a somewhat visual experience when they thought of an apple, or their front door, or their last holiday, these folk saw blackness.

If you’re aphantasic, and you want to know what something looks like, one solution is to draw it

Reading around the topic, I discovered that this quirk had been commented on before. Francis Galton, the first psychologist to measure the vividness of visual imagery, recognised in the 1880s that a small number of those whom he approached lacked imagery entirely: their ‘powers of visualisation … [were] zero’. But oddly this intriguing observation had lain in the long grass since. One reason might have been that it lacked a convenient name. So when my colleagues and I came to describe in the research literature the 21 individuals who’d made contact with us, we decided to coin one. At the suggestion of my classicist friend David Mitchell, we borrowed from Aristotle, who used the term ‘phantasia’ to denote the mind’s eye, adding the prefix ‘a’ to denote absence. In 2015, we published our paper reporting these participants as having ‘congenital aphantasia’.

Five years on, I have heard from around 14,000 people with unusual mental imagery capacities, most of them at the aphantasic end of the spectrum, but also a minority with ‘hyperphantasia’, who experience imagery ‘as vivid as real seeing’. Depending on the precise definitions used, aphantasia is estimated to occur in around 3 per cent of the general population, and hyperphantasia in around 6 per cent of the population.

Through questionnaire and face-to-face studies, we have found some consistent associations with these extremes of imagery vividness, helping to assuage the worry that they might simply reflect vagaries of introspection. People with aphantasia are more likely to work in science, mathematics and IT, while those with hyperphantasia are more likely to work in traditionally ‘creative’ industries. Aphantasia is associated with difficulty with autobiographical memory and with imaginary or future thinking; people with aphantasia also tend to be relatively poor at recognising faces (which is intriguing, as this is a perceptual rather than a representational problem) and they’re diagnosed with autistic spectrum disorder at above-average rates. Extremes of imagery tend to cluster in families, hinting at a genetic link or links. Some people with aphantasia report avisual dreams, but many dream visually, which suggests wakeful and dreaming imagery depend on somewhat separate processes. Some lack imagery in any of the senses – no mind’s ear or mind’s nose, for example – while others have vivid imagery in at least one other sense. In short, aphantasia is almost certainly more than one ‘thing’.

You might be feeling that, on the whole, people with aphantasia have a raw deal but, while it has some drawbacks, there are advantages too. For example, lack of distraction by emotional imagery might allow people with aphantasia to be ‘present’ in ways that some of us might envy, and it’s abundantly clear that aphantasia is compatible with high achievement: Craig Venter, who led the first draft sequences of the human genome, Ed Catmull, past president of Pixar Disney and recent recipient of the Turing Prize for his work on computer-generated animation, Blake Ross, co-creator of Mozilla Firefox, and Oliver Sacks, the acclaimed neurological author, have all declared their aphantasia.

We are immensely complex creatures: the possession of visual imagery is one small piece in the huge jigsaw of cognition

When I first encountered people lacking visual imagery in some numbers, I was fascinated by this invisible variation in human experience. I wondered how to make sense of it. My first pass was that it probably reflected an extreme form of the old distinction between ‘verbalisers’ and ‘visualisers’. I assumed that people lacking imagery would be more dependent on language and generally less interested in the visual world, than those with vivid imagery. My colleagues in our Eye’s Mind project at the University of Exeter – two historians, a philosopher, an artist and a neuroscientist – broadly agreed. The finding that aphantasia predisposes people to work in scientific rather than creative trades seemed to bear out this assumption. Imagine our puzzled surprise, then, as aphantasic visual artists got in touch in growing numbers – about 150 so far, alongside a smattering of actors, authors and architects. Why would you want to depict a world you can’t imagine? How can artists create without any imagery to guide their creation?

I realised belatedly, after hearing from these people, that aphantasia might sometimes increase rather than reduce interest in the visual world. People with aphantasia see perfectly well and can have an eye for beauty. In fact, deprived of the ability to contemplate the look of things in their mind’s eye, their visual attention to the here and now might be heightened. And lacking a mind’s eye might also increase the motivation to represent the visual artistically – as my colleague, the cultural historian Matthew MacKisack pointed out to me, if you’re aphantasic, and you want to know what something looks like, one solution is to draw it. This meshed with the report from many of our study participants that they used photography extensively to capture appearances they would otherwise be unable to retrieve. As Sheri Bakes, a Canadian artist who – unusually – had lost imagery following a stroke at the age of 29, told us: ‘The paintings have become the picture inside that I can’t see.’ She wrote elsewhere: ‘After the stroke, I taught myself to paint before I could even walk or speak again properly; it was the only thing I could really do.’

Increasingly struck by the accounts we were receiving, in 2019 we mounted an exhibition of work by aphantasic and hyperphantasic artists at the Tramway in Glasgow and then at the Royal Albert Memorial Museum in Exeter ­­– Extreme Imagination: Inside the Mind’s Eye, curated by MacKisack and the artist Susan Aldworth (now accessible virtually). I would challenge any visitor to ‘diagnose’ which category each artist belonged to. Artists with aphantasia produced works ranging from the photorealist to the abstract, conjuring vivid detail as well as suggestive ambiguity. But their accounts of their artistic process were distinctive.

The point of departure for the aphantasic artists’ work is not a visual image, but a ‘feeling’, ‘emotion, desire, energy’, ‘thoughts and ideas’ or a sense of a spatial arrangement. Some then make use of existing materials, through collages or reworkings of famous paintings; others rely on drawing from life, or refer to archives of images and photos; a third group, intriguingly to me, describes using the developing work on the page or canvas as a kind of externalised imagination, allowing them to ‘push and engage with the appearing image’, sometimes with a ‘thrilling sense of stepping out into the unknown’.

A lifetime of looking, of drawing and – I suspect – a wealth of unconscious imagery informs aphantasic artists’ use of their work to dream itself into being. Catmull was startled to discover that one of his favourite illustrators, Glen Keane, animator of The Little Mermaid (1989) and Beauty and the Beast (1991), lacks imagery, like Catmull himself. Yet Keane was named a Disney Legend in 2013, and won a 2017 Academy Award for his animated film made with Kobe Bryant, Dear Basketball (2017). I’ve seen a clip of Keane drawing that shows him peering intently at a preliminary, indecipherable scribble, hunting for the cues that will help him to conjure a vivid drawing from the page. Intriguingly, he belongs to a lineage of artists – his father Bil was a celebrated cartoonist, and his daughter, Claire, helped to illustrate Frozen (2013).

Our finding that aphantasia predisposes people to work in the sciences suggests that our initial assumption, that it would militate against a career in art, was not wholly wrong. But we are immensely complex creatures: the possession of visual imagery is one small piece in the huge jigsaw of cognition. There are many ways to represent things in their absence besides a sensory image – language for example and, as our exhibition illustrated, art! Our work with aphantasic creatives drives home another broad conclusion: we shouldn’t confuse visualisation with imagination, the far broader capacity, to represent, reshape and reconceive things in their absence. Imagination can certainly make use of imagery – but it doesn’t have to. As the examples of Bakes, Catmull, Keane, Ross, Sacks and Venter demonstrate amply, aphantasia is no bar to an imaginative life. If, reading this, you come to the conclusion that you too might lack imagery, or have it in spades, don’t hesitate to contact me (a.zeman@exeter.ac.uk) as we still have much to learn.