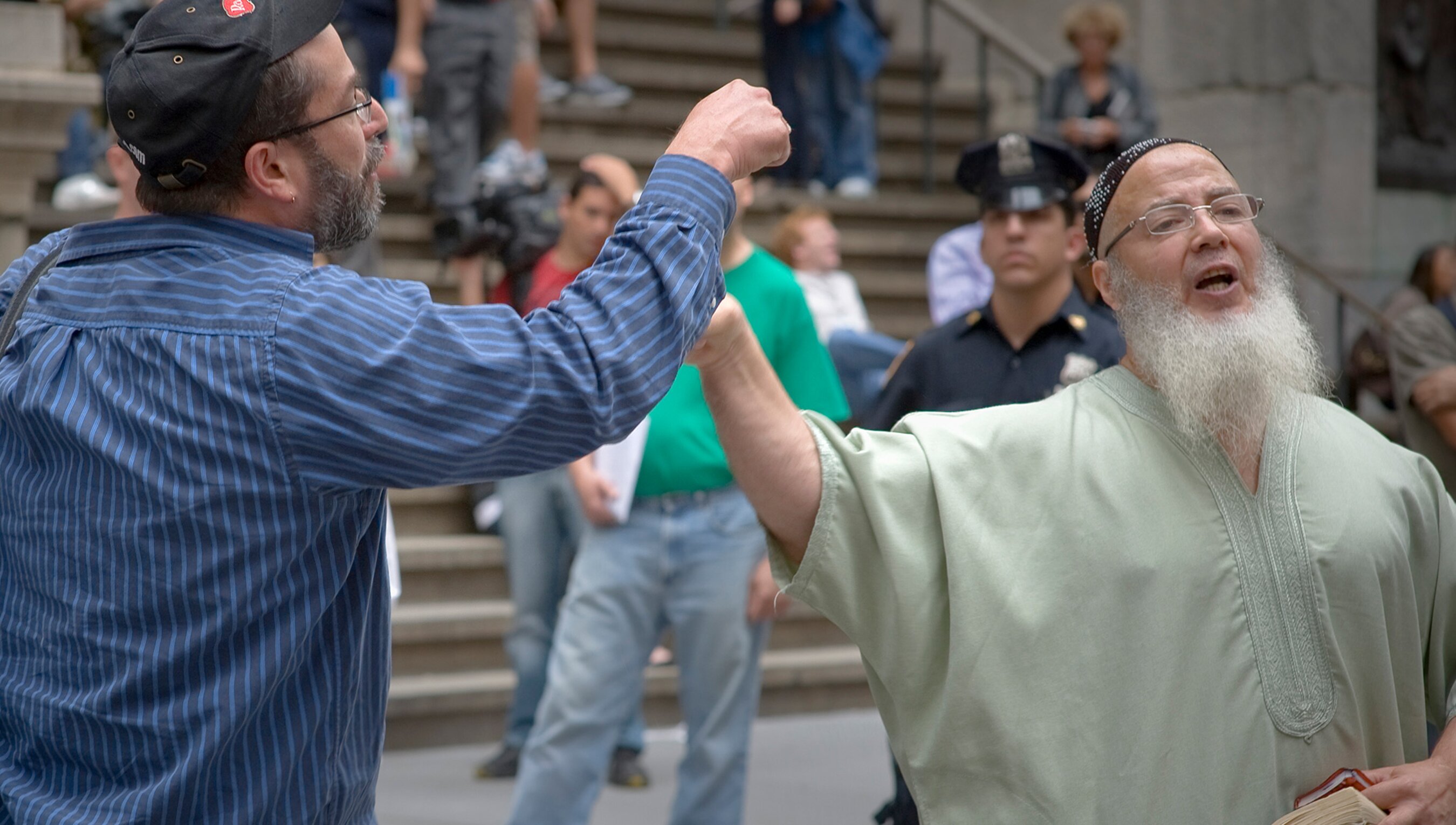 An argument breaks out between a Muslim ex-serviceman and a journalist on Wall Street in 2008. Photo by Steve Forrest/Panos

For Montaigne, verbal jousting is the only way to reach truth

An argument breaks out between a Muslim ex-serviceman and a journalist on Wall Street in 2008. Photo by Steve Forrest/Panos

is a digital engagement officer at the University of Edinburgh. She holds a PhD in French and Italian Renaissance literature from Durham University, and her writing on pop culture and philosophy has appeared in Gastro Obscura, History Today and Electric Literature.

During the late 1500s, France was ripped apart by civil war. Catholics and Huguenots (French Protestants) killed one another in increasingly violent turns. The St Bartholomew’s Day massacre of 1572 epitomised the senseless bloodshed of the age: beginning in Paris and spreading outwards into the countryside, historians estimate that between 5,000 and 30,000 Huguenots were slaughtered by Catholic forces intent on destroying the influence of their religious enemies. The Protestant Queen Elizabeth I in England reacted with disgust at the ‘cruel murtherers of such innocents’, while Pope Gregory XIII in Italy was so overjoyed at the news that he issued a commemorative medal to mark the occasion. Stark ideological divisions spanned much of Europe, and France had become the epicentre.

Michel de Montaigne (1533-92), a Catholic nobleman who served as mayor of Bordeaux, found himself in the middle of this war zone – confined to his château in southwest France, while soldiers stole his crops and deserters from both sides wandered through his lands. ‘Monstrous wars’ and ‘our troubles’ is how he refers to the fighting throughout the Essais, his celebrated collection of philosophical meditations.

Although shaped by the religious conflict of the late-16th century, the Essais are remarkably freethinking in nature. Montaigne writes on every topic imaginable, from childrearing to his bladder stones, and rarely offers a firm conclusion to the issues he raises. The Essais themselves are a living document; Montaigne revised them several times between 1570 and 1592, adding further annotations with each new edition. These additions often obscured his original point and reflected his changing opinions over the years. In his book Montaigne and the Art of Free-thinking (2016), Richard Scholar notes that this style represents a desire to hunt for ‘that elusive thing called the truth … He keeps searching, commenting all the while on the obstacles that his mind encounters and the unexpected directions it takes in the course of its various adventures.’ For centuries, scholars have ruminated on the Essais in a similar fashion and, even now, his writing remains open to countless interpretations.

If the Essais are so willing to entertain the prospect of ambiguity, how did Montaigne respond to the polarisation of his age? In ‘On Physiognomy’ (Book III, Chapter XII), he recounts two fascinating anecdotes that provide an insight into his views on communicating with people of different ideologies.

In the first episode, a desperate man appears at the gates of Montaigne’s château. Montaigne greets the man and allows him to enter. The gentleman explains that he has just escaped from the clutches of an enemy host and pleads for his men to be allowed to find refuge inside the castle walls. Montaigne quickly smells a rat: ‘[T]his story began to arouse my suspicion.’ Stragglers from the supposed attack begin to appear and before long, 30 armed men surround Montaigne in his courtyard, waiting for their master to give the order to attack. But the order never comes. Montaigne feigns ignorance of the danger and instead invites them in: ‘I did my best to comfort, reassure and refresh them.’ His words of welcome disarm the gentleman, who eventually leaves with his men in tow.

The second anecdote is equally surprising. During a supposed truce between Protestant and Catholic forces, Montaigne is travelling on the road with a small retinue when bandits attack. He is robbed of nearly everything, including horses, equipment and a money box. The bandits reveal themselves to be Huguenots who want to ransom Montaigne but, rather than whisking him away somewhere, the two sides end up talking for hours. Eventually, the head bandit releases Montaigne, ‘even taking pains to search for my belongings scattered among the troop’ – including the prized money box.

What are we to make of these two stories? Nobility across the region were facing similar encounters in and around their castle walls. Many of them met very different fates to Montaigne. To escape two such incidents unharmed seems astonishing. The chapter title ‘On Physiognomy’ gives us the first clue. Montaigne builds up to these anecdotes by exploring the link between what we see and how things really are. He delves into the popular early modern science of physiognomy, which claimed it was possible to determine somebody’s character through the features of their face. He then assesses his own demeanour in light of these two incidents.

Montaigne credits his appearance of sincerity for saving his life in the first anecdote: ‘He [the brigand] has often said since … that my face and my frankness had disarmed him of his treachery.’ Similarly, the second bandit tells Montaigne he owes his freedom to his face, alongside the ‘firmness of his words’. Montaigne argues that his honest intentions are always written in his expression, which has allowed him to survive such troublesome times ‘without quarrel or offence’. Eventually, this quality earned him a diplomatic role as go-between for the Catholic Henri I, Duke of Guise and the Protestant Henry III, King of Navarre. Admittedly, his frankness was feigned to a certain extent, since Montaigne was deeply aware of the peril he faced in the two stories he relates. But his intention was to escape imminent death, and he found that responding to aggression with an impassive manner neutralised danger far more easily than a call to arms.

And what of the ‘firmness of his words’? In the same chapter, Montaigne admits to a certain degree of honesty in his speech. Such openness is a consistent aspect of Montaigne’s character. During the war, he was known throughout the region for keeping the doors to his château wide open. When Montaigne recounts the first anecdote, he says that ‘I bade him [the brigand] to come in, as I did with everyone.’ It is unsurprising, then, that he applies the same principles to his speech.

Although Montaigne despised the religious extremism of his age, he relished conversing with friends and foes alike. After all, he believed that ‘total agreement is the most painful characteristic of any conversation’. Faced with armed soldiers on horseback, Montaigne responds with a willingness to talk, rather than matching the hostility of his aggressor. His love of frank dialogue prepares him well for his encounter with the Huguenot bandits who wish to take him hostage.

So what does this dialogue entail? In ‘On the Art of Conversation’ (Book III, Chapter VIII), Montaigne argues that talking is ‘the most productive and natural exercise of our mind’. Above all, it is a practice that entails a willingness to embrace disagreement. Montaigne welcomes divergence: ‘No proposition shocks me, no belief injures me, however different it is to my own opinion.’ In fact, he compares conversation to jousting; an excellent talker is a ‘stiff jouster’ who ‘presses at my sides, pricking me left and right’. Verbal jousting is beneficial to both parties, since it encourages two minds to push each other into new planes of understanding.

One should engage in conversation without allowing prejudice to form the basis of the dialogue. ‘I am not suspicious by nature … I refuse to believe the most awful and perverse inclinations if I don’t witness them myself, in the same way I treat monsters and miracles.’ Montaigne takes people as they come, without assuming the worst of them before they have opened their mouth. He encourages people to embrace the intellectual challenge posed by an opposing view and listen to an argument first before judging an individual. Responding to the words being spoken takes precedence over the person speaking them.

After all, there is no guarantee that we will hold a particular opinion forever. According to Montaigne, not only our physical bodies but also our inner faculties – ‘nostre jugement’ – are in constant flux. During the Reformation, people converted between Catholicism and Protestantism; families were suddenly separated by awkward ideological differences. Montaigne’s youngest brother, Bertrand, retained his Catholicism while another brother and three sisters embraced Protestantism. Montaigne discovered that even people’s religious convictions could evolve with time – a fact that only heightened his disgust at the absurdity of pitching extreme opinions and acting on them with such displays of bloodshed as the St Bartholomew’s Day massacre.

What can we learn from the art of conversation in the Essais? Arguably, today’s bloodshed is the fallout from online discourse. Twitter and similar platforms provide a vehicle for users to bully victims into losing their jobs or suffering mental health issues. Montaigne underlines the importance of the face in polarised communication; even the tensest of situations can be defused by seeing the passivity in someone’s expression. Compare this with the anonymity of online trolling. Attacking someone online removes the power that facial expressions have in disarming abuse and moderating conversation.

People now publicly declare themselves ‘unsafe’ around co-workers who hold legal opinions different to their own. Conversation can be prickly among friends and enemies. Montaigne believed that talking should be difficult if conversation was to reach its most productive goal. This can be a troublesome idea. After all, who wants to listen to someone who disagrees with you? Yet verbal ‘jousting’ is disappearing as people prefer to block out arguments – and people – that challenge them.

Montaigne demonstrates that it’s possible to encounter radically different views and walk away unscathed. The stories he relates are extreme examples that illustrate wider points about the importance of honesty in expression and willingness to embrace dialogue, even with our ideological ‘enemies’. We must allow others to think differently, since we ourselves will inevitably evolve over time, and let ‘truth … be the common cause which unites us’. The Essais embrace truth as an elusive entity. But talking to one another inches us closer towards that unattainable goal.