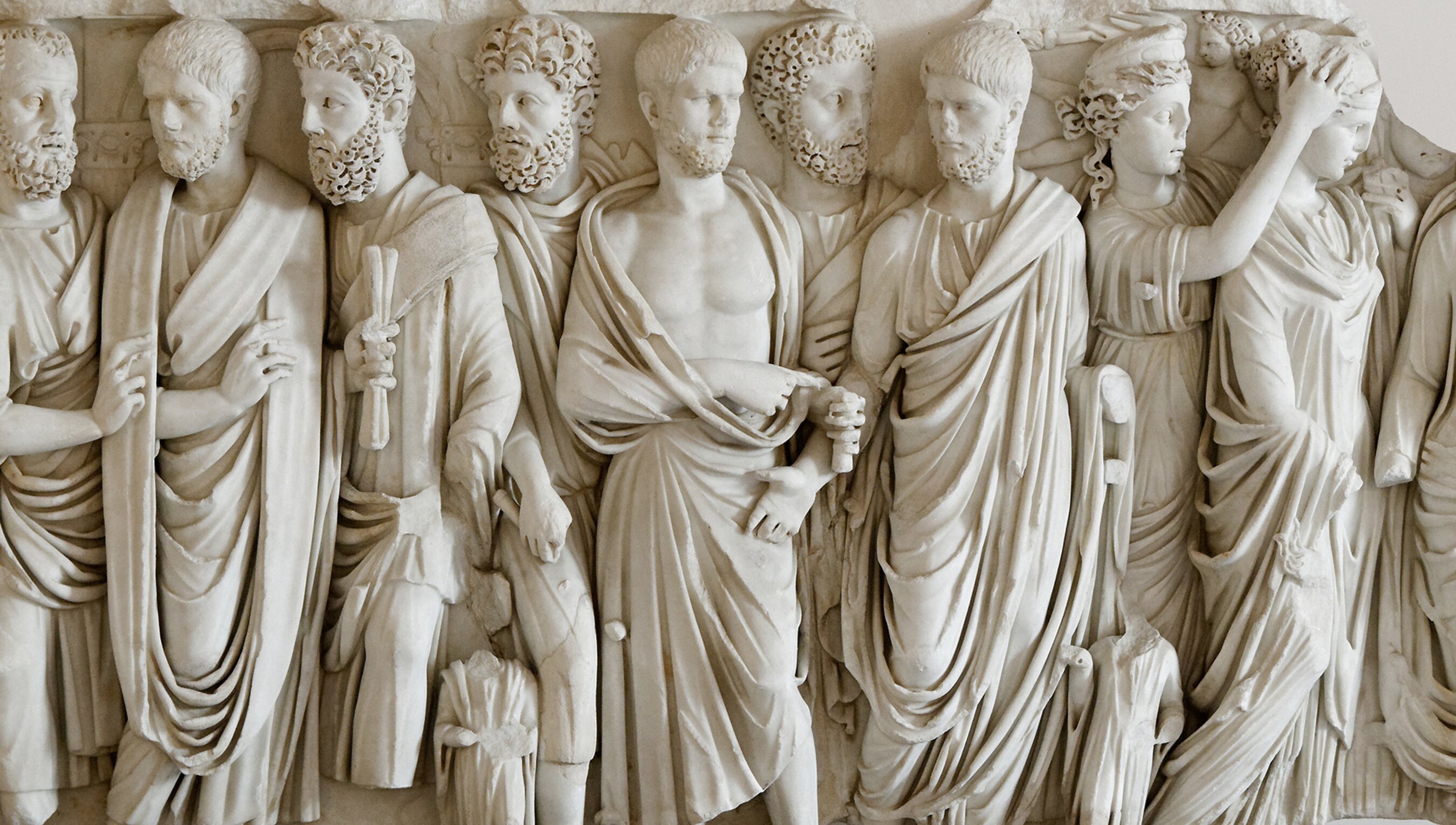 Horace’s lyrics of friendship offer hope to our troubled world

is a Classics professor at the University of the South in Sewanee, Tennessee. Her translation of Ovid’s Metamorphoses into iambic pentameter has just been published by Penguin Classics.

In Odes 2.7, published in 23 BCE, Horace welcomes his longtime friend Pompeius back to Rome after years of civil war:

With Massic wine that brings forgetfulness
fill up the polished cups. Pour out the perfumes
from spacious vessels. Who is making sure
to finish garlands of wet celery
or myrtle? Whom will Venus pick to be
judge of the drinking? No more soberly
than the Edonians will I rave. To me
it’s sweet to lose my mind – my friend is back.

Pompeius fought alongside Horace at Philippi against Octavian, the future emperor Augustus. Unlike Horace, he continued his opposition after this defeat, most likely on the side of Sextus Pompey. He has now returned under a general amnesty, a cause for exuberant feasting and drinking. This celebration of friendship signals an end to partisan chaos, bringing into focus instead the joyous possibilities of the present.

When I comb the pages of Roman poetry, it is only in such Horatian poems that I find something that speaks immediately to me as friendship: people forging common bonds within a turbulent political and social context, often over shared food and drink. Friendship, of course, is a literary theme as old as myth itself – Gilgamesh and Enkidu, Achilles and Patroclus, David and Jonathan – and Horace’s own poetics of friendship are indebted to his Greek lyric forebears such as Alcaeus. But Horace braids this theme into an ethical system that speaks powerfully to a modern world embroiled in political division and in the grip of a pandemic forcing us to seek out a meaningful life amid separation and constant reminders of our mortality.

Friendship stands at the centre of Horace’s poetic world, from the lyric Epodes and Odes to the hexameter Satires, Epistles, and Ars Poetica. The first name he utters in his poetry is that of Maecenas, his patron, but more significantly, his friend. So close are the two in Horace’s pages that he pledges to follow Maecenas even into death: ‘we’re ready/to trek the final journey as companions’ (Odes 2.17). This is, incidentally, a promise Horace kept – an ancient biography records that he died just 59 days after Maecenas.

It’s the lyric poems that champion friendship with the greatest urgency, straddling as they do the tumultuous period that gave rise to Augustus and, with him, the Roman Empire. Horace is the only one of his contemporaries who makes friendship so central to his poems, yet like many of them he is proposing solutions to the bitter hostilities that had led Rome into a century of civil strife. For Horace, friendship is the most tangible way we can seek the good life even in the midst of crises beyond our control.

Friendship holds a therapeutic value, helping Horace envision a life on the other side of violence

Horace lived in a time not unlike our own, in which everything was political – even friendship. Repeatedly in Horace’s lyrics, personal enmity is the concomitant of larger social breakdown. The Epodes, written in the 30s BCE amid the civil war Octavian fought against Antony and Cleopatra, present us with a Horace continually at odds with his foes, hurling invective to belittle and humiliate them. In Epodes 4, he describes the hostility he feels toward a fellow Roman as discordia – ‘discord’ – a word that can just as easily describe the civil discord of a nation as the animosity between individuals.

Yet alongside such attacks there runs an insistent longing for friendship. In Epodes 13, Horace speaks of a ‘horrible storm’, which refers not so much to bad weather as to a renewed eruption of civil war. Horace addresses his amici, ‘friends’, urging them not to martial violence but to convivial drinking with one another : ‘Now it is pleasing/to pour on Persian balsam and … to ease our hearts of terrible anxieties.’

In Epodes 9, set at the battle of Actium, friendship holds a similar therapeutic value, helping Horace envision a life on the other side of violence. He asks Maecenas: ‘When will I, joyous in Caesar’s triumph/drink the Caecuban saved for festive/banquets with you inside your lofty home?’ Horace longs for victory not because it will lead to public glory but because it will simply allow him to enjoy friendship in peace once again. Even in the midst of the battle, he seeks refuge in private drinking with friends as a momentary release from his ‘distress and fear’ over Caesar’s public affairs.

By the time of the monumental Odes, civil hostility wanes, replaced by the very sort of celebration that Epodes 9 had envisioned. In Odes 1.37, the defeat of Cleopatra elicits a call to exuberant male bonding: ‘Now we must drink, now pound upon the earth/with a free foot.’ Antony, their fellow Roman, significantly goes unnamed as citizens take to the streets to dance.

To Horace, friendship must ultimately have the upper hand in times of upheaval not out of any privileged notion of civility (Horace is hardly ‘civil’ toward Cleopatra) or out of a quasi-Christian sense of loving one’s enemies (a move the pagan Horace never makes), but simply because discord cannot give life meaning or depth. It cannot allay our anxieties or remind us that there remains something within our control that makes living worthwhile.

It is of course death that’s the greatest source of anxiety for many human beings, and in his lyric poems Horace repeatedly holds out friendship as the best possible antidote to such despair. Instead of shielding us from our mortal condition, he reminds us of it constantly. Each of us will die, and then there will be no wine, no love, no friendship. The finality of death is his most constant refrain. Once we descend to the Underworld, ‘we’re nothing more than dust and shadow’ (Odes 4.7). Such ephemerality demands friendship – without it, our mortal lives are squandered.

This call to ‘drink while we can’ folds friendship into what is perhaps Horace’s most abiding theme: carpe diem

Friendship indeed becomes acutely important as one ages. Horace, especially in the Odes, is perhaps the foremost poet of middle-aged friendship. War and love – the stuff that leads to division – are features instead of youth’s impetuosity. In one movingly beautiful poem (Odes 2.11), Horace urges his fellow middle-aged friend Quinctius to put aside his ‘gnawing anxieties’ about the future and to focus instead on the here-and-now within his grasp. Quinctius’ fleeting life, his loss of ‘smooth-cheeked youthfulness and grace’, makes doing so all the more pressing. Horace depicts a private, idealised landscape, where together he and Quinctius can recline beneath a plane or pine and ‘drink while we can’.

This call to ‘drink while we can’ folds friendship into what is perhaps Horace’s most abiding theme: carpe diem, a tag coined in Odes 1.11. This phrase is commonly misunderstood – it has little to do with the instant gratification traditionally associated with it. Carpe suggests not seizing but plucking or harvesting the day as if it were ripe fruit. To seize the day is to recognise and savour what is at hand for enjoyment in each moment of our mortal lives. Such savouring can best be done in the company of friends.

For all its inviting familiarity, Horatian friendship has other aspects that modern readers might find less amenable. Such friendship frequently defines itself in opposition to outsiders, with Horace contrasting his inner circle with various ‘others’, such as foreigners. There are few women admitted into this circle – when they are, they’re normally objects of sexual desire or derision rather than friends. Such friendship also, despite Horace’s own status as the son of a freedman, contains a strain of class snobbery – his friends are often Rome’s elite, and if Horace’s rank doesn’t qualify him to be among them, his intellectual gifts and ties to Maecenas do. This friendship is tightly woven into the social fabric of 1st-century BCE Rome and can’t be disentangled from Rome’s highly stratified and complex system of patronage, which both delineated and policed social hierarchies. Such features, however, instructively illuminate our own (perhaps inescapable) tendency to use friendship as a tool to reinscribe social and political divisions rather than allay them.

Despite these shortcomings, it is still Horace to whom I (a non-elite woman myself, in Roman terms) turn again and again in my own ephemeral life, mining his words for ways to forge connections and live well. His lyrics remind me constantly of the precious value of the relationships I’ve built with those I love, no matter how different these relationships might look from those of Horace. Over the years, he himself has become a kind of friend to me, and he continues to guide me through the political anxiety, the unfathomable death, and the seemingly neverending separation that define this specific moment in which I live. I am not naive enough to think that friendship is all that this moment requires, but I do know this moment requires friendship if I’m to face it without despair. And so I let Horace’s refrains run through my mind to keep my eyes focused on what’s in my grasp right now and to give me hope for what comes next.