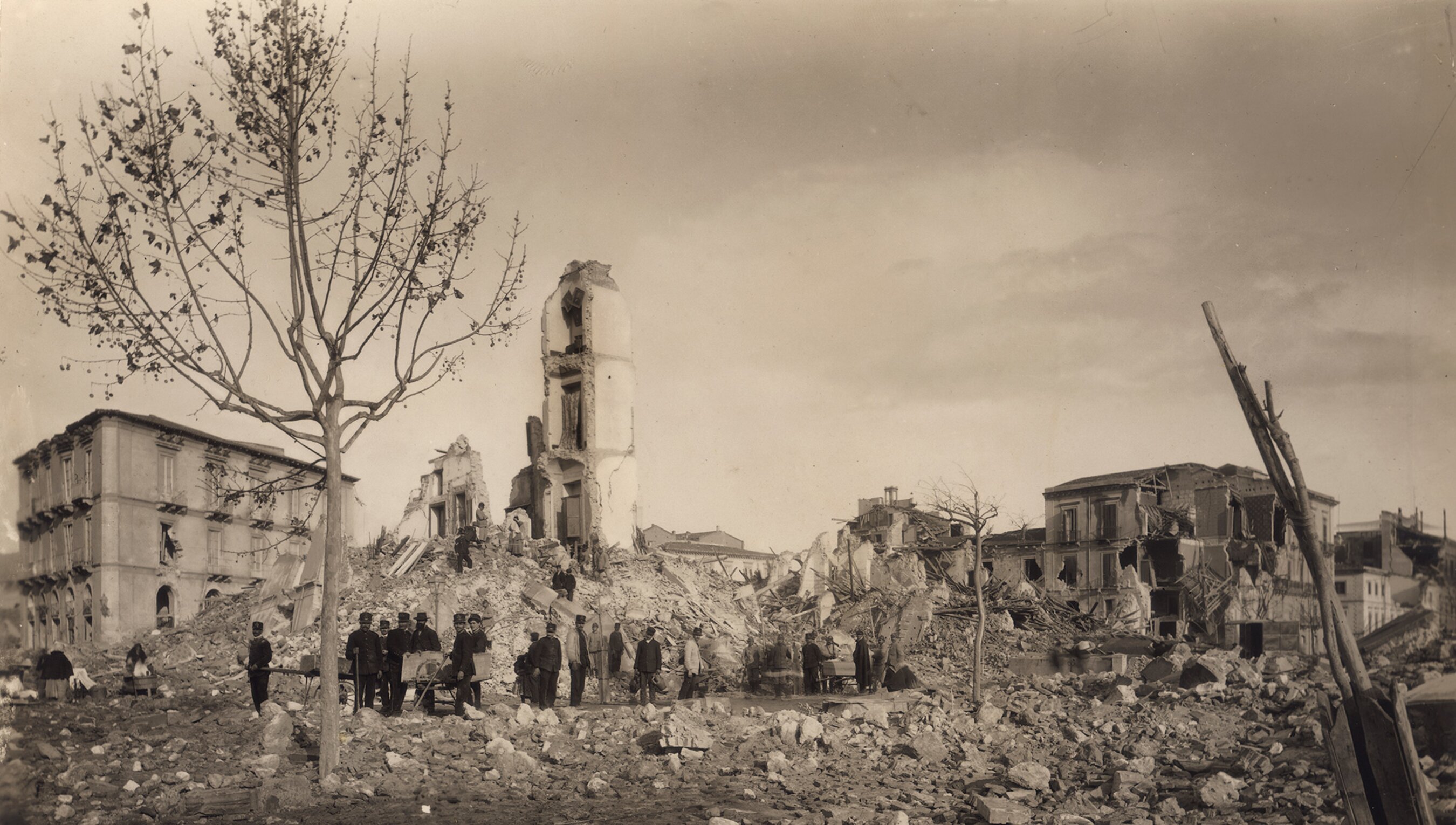 The radical aristocrat who put kindness on a scientific footing

Searching among the rubble of the 1908 Messina earthquake in Italy. Photo by Alinari Archives/Getty

is a historical novelist and biographer. Her latest book, Mr Peacock’s Possessions (2018), is set on a remote island at the height of the Pacific slave trade. She is currently working on a group biography of the radical women in her family, one of whom was a friend and colleague of Kropotkin. She lives in London.

Five years had passed since Czar Alexander II promised the emancipation of the serfs. Trusting in a map drawn on bark with the point of a knife by a Tungus hunter, three Russian scientists set out to explore an area of trackless mountain wilderness stretching across eastern Siberia. Their mission was to find a direct passage between the gold mines of the river Lena and Transbaikalia. Their discoveries would transform understanding of the geography of northern Asia, opening up the route eventually followed by the Trans-Manchurian Railway. For one explorer, now better known as an anarchist than a scientist, this expedition was also the start of a long journey towards a new articulation of evolution and the strongest possible argument for a social revolution.

Prince Peter Kropotkin, the aristocratic graduate of an elite Russian military academy, travelled in 1866 with his zoologist friend Ivan Poliakov and a topographer called Maskinski. Boat and horseback took them to the Tikono-Zadonsk gold mine. From there, they continued with 10 Cossacks, 50 horses carrying three months’ supply of food, and an old Yukaghir nomad guide who’d made the journey 20 years earlier.

Kropotkin and Poliakov – enthusiastic, curious and well-read young men in their 20s – were fired by the prospect of finding evidence of that defining factor of evolution set out by Charles Darwin in On the Origin of Species (1859): competition. They were disappointed. As Kropotkin later wrote:

We saw plenty of adaptations for struggling, very often in common, against the adverse circumstances of climate, or against various enemies, and Polyakoff wrote many a good page upon the mutual dependency of carnivores, ruminants, and rodents in their geographical distribution; we witnessed numbers of facts of mutual support … [but] facts of real competition and struggle between higher animals of the same species came very seldom under my notice, though I eagerly searched for them.

Kropotkin pursued this contradiction for decades. Observation and wide reading convinced him that what he’d seen in Siberia was no exception, but a rule. In the 1860s, he watched a vast exodus of fallow deer gather in their thousands to cross the river Amur at its narrowest point to escape an early snowfall. In 1882, he was fascinated by a crab stuck on its back in a tank in Brighton Aquarium; it was painstakingly rescued by a band of comrades. Kropotkin collected descriptions from all over the world of the sociable behaviours of ants, bees, termites, falcons, swallows, horned larks, migrating birds, gazelles, buffalo, colonies of beavers, squirrels, mice, flocks of seals, herds of wild horses, tribes of dogs, wolf packs, marmots, rats, chinchillas, as well as apes and monkeys. He wrote that:

[A]s we ascend the scale of evolution, we see association growing more and more conscious. It loses its purely physical character, it ceases to be simply instinctive, it becomes reasoned.

It proved impossible for Kropotkin, a man ‘amiable to the point of saintliness’ according to George Bernard Shaw, to dedicate himself entirely to the ‘highest joys’ of scientific discovery, when all around him he saw ‘nothing but misery and struggle for a mouldy bit of bread’, as he put it in his Memoirs of a Revolutionist (1899). In 1872, in Switzerland, he became an anarchist, impressed by the egalitarian fraternity he found among the watchmakers of Jura. Back in Russia, he joined the revolutionary Circle of Tchaikovsky, disseminating underground literature and lecturing to the workers of St Petersburg disguised as Borodin the peasant agitator. His propaganda landed him in prison, but he escaped in 1876 with the help of comrades. By 1883, he was a political prisoner once again, this time in France. This second confinement gave him time to develop his arguments about evolution: he started to address systematically the conflicting interpretations of Darwin emerging in different parts of the world.

In England, the biologist, anthropologist and anatomist Thomas Huxley had quickly emerged as ‘Darwin’s bulldog’. Self-described as sharp of ‘claws and beak’, Huxley was prepared to ‘go to the Stake if requisite’ to defend evolutionary doctrine. His views on human nature and political economy were defined by Thomas Hobbes and Thomas Robert Malthus: life was an endless fight for scarce resources. The libertarian Herbert Spencer likewise applied natural selection to economics, using his infamous coinage the ‘survival of the fittest’ to justify laissez-faire capitalism. Popularly labelled ‘social Darwinism’, this view became gospel for Gilded Age industrialists such as John D Rockefeller. Although Huxley himself didn’t recommend the ‘survival of the fittest’ rule as a basis for morality – quite the reverse – he certainly believed that human beings were brutal and competitive, their sociability merely a recent veneer, rationalised by self-interest.

After Huxley published his pessimistic essay ‘The Struggle for Existence and Its Bearing Upon Man’ (1888) in The Nineteenth Century, an influential Victorian monthly review, Kropotkin was in a good position to launch an attack on Huxley’s idea of nature as a ‘gladiator’s show’. By this time, having been released from prison following an international outcry, Kropotkin was established in England, becoming quite a celebrity in the socialist and anarchist circles that blossomed through the mid-1880s. He promoted his political ideas in the international Left-wing press, and cofounded a London-based journal called Freedom, but made a living writing for scientific periodicals.

Between 1890 and 1915, in a series of interdisciplinary essays, Kropotkin drew on biology, sociology, history, (anti-racist) ethnology and anthropology to argue that species can organise and cooperate to overcome the natural environment and ensure their future survival. In 1902, the first eight essays were brought together in a book entitled Mutual Aid: A Factor of Evolution, an account of mutual support in action across the animal world (from microorganisms to mammals), ancient and modern ‘barbarian’ and ‘savage’ societies, medieval city-states and, finally, among modern humanity.

Kropotkin sought to recover an uncorrupted Darwin, whose metaphors should not be read too literally. But his call to understand compassion as ‘a powerful factor of further evolution’ cleared the way for a very particular political vision: human beings could overcome competitive struggle by voluntarily restructuring and decentralising society along principles of community and self-sufficiency.

Kropotkin became enamoured with mutual aid after reading an 1880 lecture on the subject by the celebrated zoologist Karl Kessler. Like other Russian naturalists at the time, Kessler didn’t deny the struggle for existence, but his own fieldwork in harsh and sparsely populated regions of the Russian empire strongly suggested that ‘the progressive development of the animal kingdom, and especially of mankind, is favoured much more by mutual support than by mutual struggle’. But, as Kropotkin mourned: ‘like so many good things published in the Russian tongue only, that remarkable address remains almost entirely unknown’.

Neither was Kropotkin alone politically. The historian of science Eric Johnson has recently demonstrated that the rhetoric of social Darwinism arose in reaction to ‘Socialist Darwinism’, while Piers Hale traces a much more contested politics of evolution than many historians have previously recognised. The women’s rights campaigner Annie Besant in 1886 declared that she was a socialist because she believed in evolution. She was one of a number of thinkers on the Left who read Darwin as proof that power and privilege, not nature, were responsible for social inequality.

Kropotkin’s ideas about mutual aid have often been dismissed. The title of Stephen Jay Gould’s confessional essay is telling: ‘Kropotkin Was No Crackpot’ (1988):

If Kropotkin drew inappropriate hope for social reform from his concept of nature, other Darwinians had erred just as firmly … in justifying imperial conquest, racism, and oppression of industrial workers as the harsh outcome of natural selection in the competitive mode.

Many biologists now credit Kropotkin with laying the groundwork for all subsequent studies of altruism and mutualism in natural selection, and outlining an epigenetic framework in which heredity and development are integral to the process of evolutionary change. Social activists and anarchists embrace his ringing refutation of the political value of competition.

Kropotkin united science with anarcho-communism for the rest of his life, and Freedom continued to promote mutual aid in its columns. The turn of the century brought tough times for anarchism. London was no longer its international hub, an ‘anarchist holy-city’. The principle of ‘propaganda of the deed’ had irrevocably conflated the movement in the public mind with dynamite, assassination and acts of terror, while surging enthusiasm for Marxism struck at anarchism’s support base. Boer war jingoism hardly helped. ‘[O]ur movement just now is so slow, so low down,’ Kropotkin complained to Freedom’s editor in 1904.

In the early hours of 28 December 1908, southern Italy was struck by the most calamitous earthquake ever to hit Europe. The shock, lasting 30-40 seconds, was followed by a devastating tsunami, flattening the cities of Messina and Reggio and killing more than 100,000 people in Calabria and Sicily. Freedom reported the aftermath, applauding the rescue operation as the perfect realisation of ‘the mutual aid position’, and the ‘deeds of superhuman heroism’ achieved on the ground by common mortals ‘who are supposed to need rulers to teach them what is right’. ‘But,’ asked the paper, ‘must we have a social cataclysm before the blind selfishness of this society can give place to human solidarity and the communal life which means plenty for all?’

Kropotkin finally returned to Russia after the Bolshevik Revolution, horrified by the authoritarian socialism that now held sway. Critical of all government to his death, he wavered in his last years between fear and hope for the future. A century later, mutual aid is a thriving model of political and social organisation, and Kropotkin’s ideas have nourished thousands of bottom-up voluntary initiatives, not least Common Ground Relief and the Occupy movement. His heirs rejoice in a new slogan: ‘solidarity, not charity’.

If smiles are so easy to fake, why do we trust them?