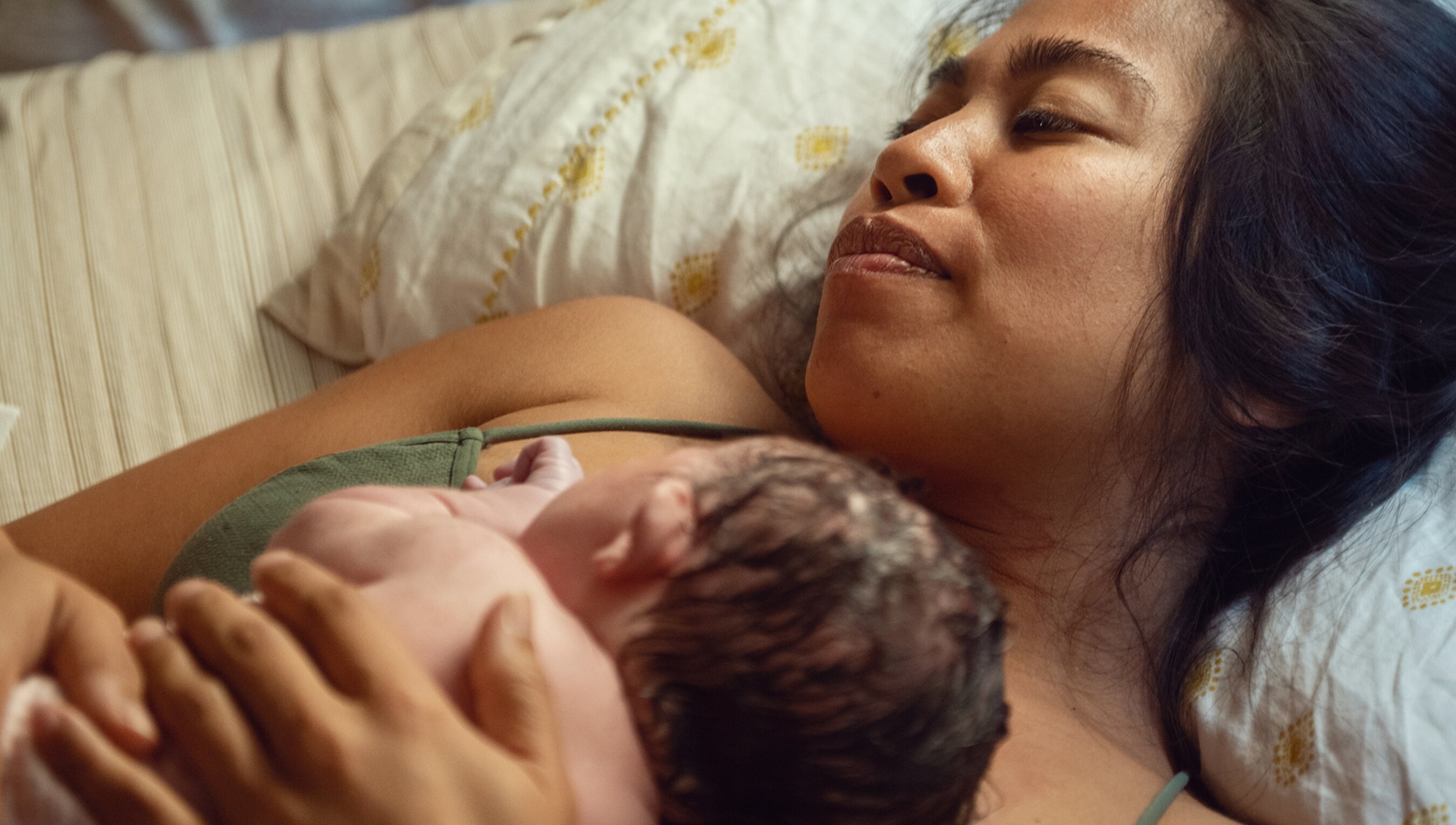 is a professor of philosophy at the University of Southampton in the UK. She is the author of Doing and Allowing Harm (2015).

An email pings into my inbox. It informs the faculty that Dr BigMuscles has completed a marathon. We’re told the impressive time and how many months of training it took: we should all congratulate him for his amazing achievement. A moment later, there is another email, just for me. It is from my favourite colleague who is always ready to poke fun at gendered double standards. She describes the whole-faculty email she would like to see, encouraging everyone to congratulate her for her epic first labour, complete with the vital statistics of method of pain relief (none), length of each stage of labour (second, or pushing, stage about the same as her partner’s marathon running time), and weight and head circumference of resulting baby.

During pregnancy, birth and the early days of parenthood, humans do amazing things with our bodies, easily comparable to the achievements of any marathon runner. When we are pregnant, our bodies shelter and nourish the growing human from microscopic blastocyst to full-term foetus. We push the boundaries of human endurance with peaks of energy use comparable to those of elite athletes. In labour, the cervix dilates to 10 cm wide, roughly the size of a bagel. When we lactate, we produce milk that is tailormade to meet our baby’s needs, becoming higher in calories when the baby signals a growth spurt by feeding frequently throughout the day and developing just the right kind of antibodies to protect the baby when either the mother or the baby gets sick.

But pregnancy, birth and breastfeeding are treated very differently from other physical achievements, such as running marathons. They are either celebrated in the wrong way – treated as yardsticks for motherhood with shame doled out to those who don’t measure up – or they are ignored or diminished, treated as a simple matter of luck or an uninteresting happenstance of biology. But that’s not right: pregnancy should be accorded a similar kind of recognition as other feats of physical prowess.

Pregnancy, birth and breastfeeding all have something in common: they are all what I call gendered embodied reproductive achievements, or GERAs for short. They are achievements because they are things that are difficult to do. They are embodied because they are things that we do with our bodies. They are reproductive because they occur as part of the process of creating and raising children. And they are gendered. Not everyone who does these things is a woman: trans men and nonbinary people become pregnant, give birth and lactate. Nonetheless, the thought that these are things that women do is central to the way that they are understood – or rather misunderstood. These activities also form a core part of dominant understandings of what a woman is and should be.

It seems to be difficult to find the right attitudes to GERAs such as pregnancy, birth and breastfeeding because of deeply embedded difficulties in common thinking about women and their relationship to their bodies, about motherhood and about achievement. There are two common ways of thinking about GERAs, representing the opposite extremes. Each approach presents problems.

The first way overstates the importance of some privileged GERAs. This is a problem of idolisation. On this approach, certain GERAs such as vaginal birth and breastfeeding are seen as essential badges of good motherhood, and motherhood is seen as an essential part of womanhood. Mothers who collect all the badges are often extravagantly praised. However, this way of thinking has the implication that women who don’t or can’t collect these badges are not good mothers and not good women. They are either deviant (if they choose not to do these things) or broken (if they are unable to): women who are childfree by choice or who decide to use infant formula are seen as deviant, as bad mothers and heretical women; women who are infertile or unable to breastfeed are seen as broken mothers and deficient women. It also ignores other GERAs: the overstating of vaginal birth ignores that caring for a newborn while recovering from the extensive abdominal surgery of a caesarean section is also a GERA.

The second way of thinking about GERAs is to think about them as little as possible. This is a problem of invisibility. Many people are simply not aware and not interested in these feats, relegating them to a domain of ‘mother and baby stuff’. If they do think about it, it is to warn women against smugness: their GERAs are nothing to feel proud of; ‘It wasn’t you. It was just your body. You were just lucky.’ The result is that pregnant, birthing and lactating people are divided from their bodies and told not to talk about or feel good about significant experiences.

Things are made worse because these two extremes are presented as the only options. Rejection of one is seen as acceptance of the other. Someone pushing back against invisibility is often assumed to be endorsing idolisation: expressing pride in your pregnancy, birth or breastfeeding is seen as shaming those who could not or would not do the same. Someone pushing back against idolisation is seen as making women’s experiences invisible.

Why is it assumed that we must choose between idolisation and invisibility? There are several underlying mistakes in common thinking.

The first mistake is essentialism: one element of this is the assumption that all mothers and all women are the same and should have the same goals. It is as if recognising something as an achievement for one woman implies that any woman who has not done the same thing has fallen short. But another aspect is that the goals and standards applied to women are reproductive: women are judged by their reproductive abilities. We need to remember that there are many ways of being a good mother – and that while being a good mother is great, women are more than just mothers. Some women might not want to be mothers and most mothers will have other things in their lives that they care about.

This is closely linked to the second mistake, misattribution. It is often assumed that if GERAs are achievements to be celebrated, then this must be because they make women better mothers. But even though they are reproductive achievements – they occur as part of the process of creating and raising children – GERAs as achievements don’t really say anything about how good a mother you are. We can admire GERAs as physical achievements without seeing them as signs of how much you love your child. This point is a little complicated for some GERAs, such as breastfeeding, which are also loving interactions between parent and child and which provide health benefits for the child. Our admiration of breastfeeding as an achievement is wrapped up with understanding that breastfeeding is often this kind of beneficial loving interaction. But there is still room to recognise breastfeeding as a physical achievement – and to do this while recognising that there are many other beneficial loving interactions with one’s children – including responsive bottle-feeding.

On the other side, when people say ‘It wasn’t you. It was just your body’, they ignore the agency needed for embodied achievements. Pregnancy and labour require physical endurance and mental strength. Breastfeeding is a learned skill. We should be able to feel proud of what our bodies do, not least because these are things that we do.

Then there is the problem of luck. All achievements involve some luck. Elite athletes need hard work, natural talent – and lucky breaks. It can be hard to celebrate our achievements while recognising how lucky we have been, and that not everyone has the same good luck. We are pushed in different directions: into arrogance (when we forget the role of luck) or into erasing our own agency (when we focus only on the lucky background conditions). We need to balance the two thoughts: I did something amazing and I was lucky to be able to do it. Like other achievements, GERAs such as pregnancy, birth and breastfeeding can be celebrated while acknowledging the role of luck.

So GERAs such as pregnancy, birth and breastfeeding should be thought of as a bit like running a marathon. Not everyone wants to run a marathon, and not every woman wants to be pregnant, have any given type of birth, or breastfeed. And people who run marathons aren’t better people, just like women who are pregnant, or who give birth or who breastfeed aren’t better people or better mothers: they just did something cool with their bodies, and deserve a kind of recognition and celebration.

This article is part of the BUMP: Better Understanding the Metaphysics of Pregnancy Project, funded by the European Research Council (ERC) under the European Union’s Horizon 2020 research and innovation programme, under grant agreement number 679586.