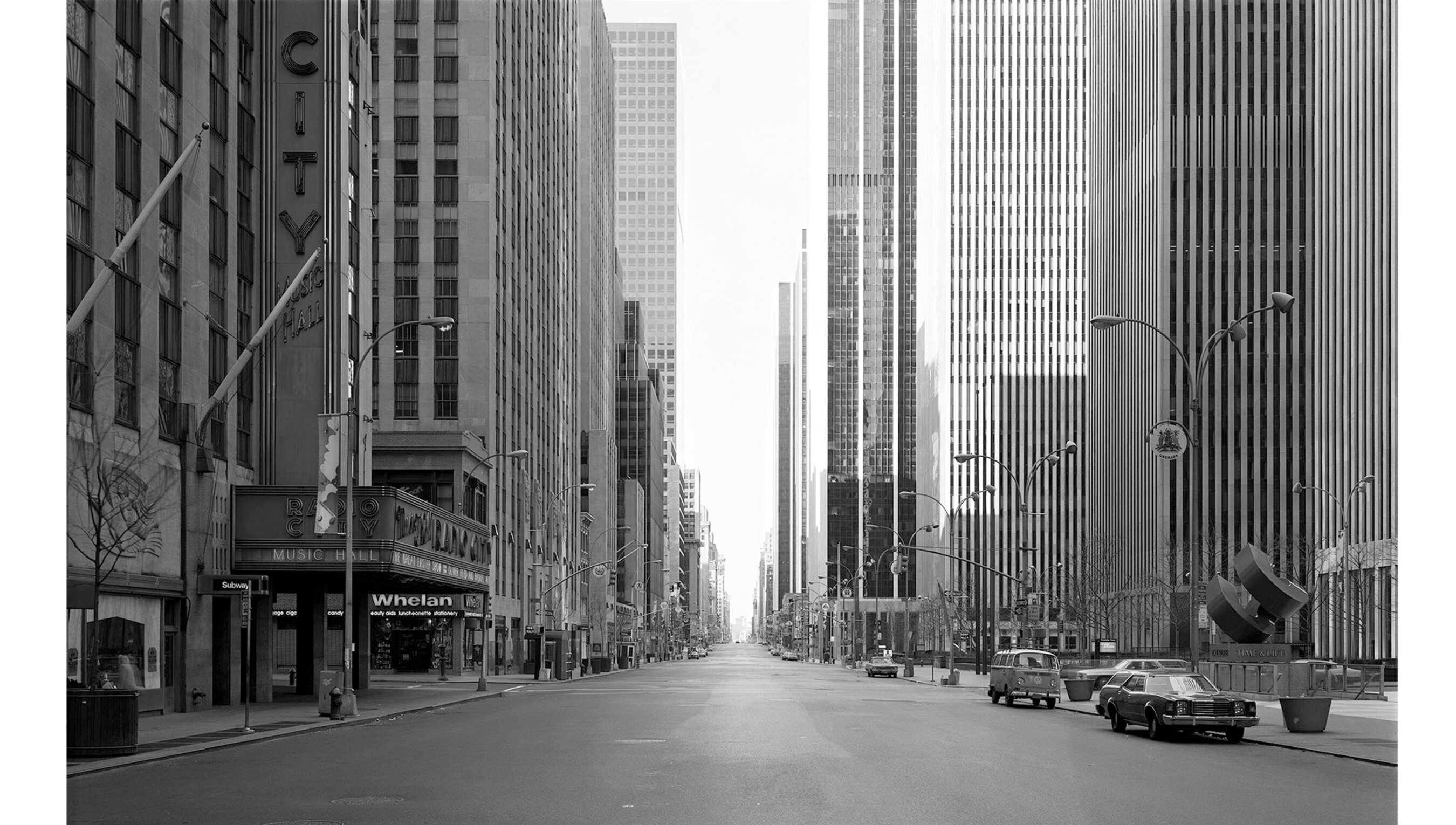 is a poet, art critic, and theorist. He is a senior lecturer in English and director of creative writing at Yale University. He is the author of the poetry collections Let’s Not Call It Consequence (2008) and Day for Night (2016) and the books Listening on All Sides: Toward an Emersonian Ethics of Reading (2008), Art of the Ordinary: the Everyday Domain of Art, Film, Literature, and Philosophy (2018) and Touch of Evil (2020).

I’m making my way across lower Manhattan on an early May afternoon, my mask snug and my glasses quickly fogging so the whole city looks hazy and indistinct. Behind me, a beer can rattles along the pavement as I pass over Crosby Street. It’s not altogether quiet – this is Manhattan after all, pandemic or not – but I’m stunned at the near-emptiness of the streets. It reminds me of an episode of The Twilight Zone, ‘Where Is Everybody?’ (1959), in which Mike, a tall, good-looking amnesiac dressed in a flight suit, wanders into what looks like a Midwestern town that’s entirely empty, as if every single person had suddenly vanished.

Throughout the town, Mike collects evidence that he has just missed people: Douglas Sirk’s movie Battle Hymn (1957) flickers in the empty cinema; a cigar burns in an ashtray; coffee boils on a stove in the diner; a phone in a phone booth rings, but no one is on the other end when he answers. A line of direction from Rod Serling’s script describes a long shot of the main street: ‘Once again the sense of emptiness and loneliness and that bizarre quality of activity with no actors.’

Serling once remarked that he got the idea for that episode

while walking through an empty village set on the back lot of a movie studio. There was all the evidence of a community but no people. I felt at the time a kind of encroaching loneliness, and desolation; a feeling of how nightmarish it would be … to wind up in a city with no inhabitants.

That emptiness is what New York felt like this spring, not simply because the streets were so empty, but because the current crisis revealed an underlying truth that, in the isolation of cities, no matter how densely packed, one often experiences the reverse of what Serling noted: the evidence of people, but no real community. Our empty streets spoke of an existential loneliness that is a shadowy but ever-present aspect of contemporary urban life.

Unlike solitude, loneliness is not merely the experience of aloneness. It is a feeling of a gap between oneself and others, the perception of an active, living, aching separation that the lonely person wishes were otherwise. In her classic paper ‘On the Sense of Loneliness’ (1963), the psychoanalyst Melanie Klein describes it as ‘the result of a ubiquitous yearning for an unattainable perfect internal state’, a state of wholeness or completion. Parts of ourselves that feel familiar, yet lost or estranged, are projected on to others and, so the thinking goes, to be wholly accepted by others is to be able to regain those lost pieces and become complete. On this line of thinking, what anyone desires is, primarily, to feel whole, a state that Klein indicates is impossible to actually achieve, and ‘loneliness’ is what we call the frustration that arises from the perpetual yearning for those lost pieces of the self. This is a profoundly human kind of loneliness, a primary, inborn, existential sense that we’re always falling away from one another, always missing, always just missed.

The Bechers located a certain bleak beauty in these architectural forms, which they described as being ‘anonymous sculptures’

As I head towards Chelsea, there’s a way that what I’m seeing seems strangely familiar, as if I’ve seen this emptiness, felt it, rather than simply imagined it, and my mind steps backwards into memory. It is a brutal February night in Berlin in 2012, and the cold tears up from the cement through my boots as I walk the city. I visit the atelier of the German photographer Thomas Struth. All afternoon, we drink espresso and talk, not about poetry or philosophy or really even about art. We talk about jazz and drumming – we are both former drummers – and improvisation, and he describes growing up near Düsseldorf, before he studied at the arts academy there, first with the painter Gerhard Richter, then with his mentors, the photographers Bernd and Hilla Becher.

On a long worktable in Struth’s studio, I look at several iterations of the same photograph, each, I am told, slightly different in terms of their shading and contrast. I am told this, but I can’t actually make out any real difference. He is showing me a set of prints drawn from his early work, images that will be presented in the then forthcoming collection Unconscious Places (2020), a comprehensive survey of his images of city streets from the beginning of his career in the 1970s, up through to 2010; from Paris to Pyongyang, from Brussels to Beijing, in colour and in black and white.

Struth’s early work shows an influence of the Bechers, in its stark, forthright, unmanipulated depictions of uninhabited urban spaces. The Bechers are known for their photographs of industrial structures such as factories, water towers, furnaces and the like. They located a certain bleak beauty in these architectural forms, which they described as being ‘anonymous sculptures’. The impact of their work lies in its seriality. As Hilla Becher once said:

By placing several cooling towers side by side something happened, something like tonal music; you don’t see what makes the objects different until you bring them together, so subtle are their differences.

The result is a heightening of attention and thus an increased particularity of the world.

Sean O’Hagan, an art critic for The Guardian, described the surprisingly emotional impact of a Bechers show in London in 2014, saying:

I was struck as always by the underlying sense of loss and melancholy that emanates from these photographs: you are looking at a lost world, however soul-destroying that world was for those who had to live and work in it.

Of course, that’s a manner of speaking: melancholy isn’t actually emanating from the photographs. Looking at them, we see ourselves, looking.

In Struth’s unpeopled photographs of New York’s streets, we see the space or context where such relationships occur

The photograph of Struth’s that floats to mind as I walk through lower Manhattan, bringing me back to that moment in his atelier and the images arranged on a worktable, is from 1977. It depicts a deserted West 21st Street in New York’s Chelsea district, a neighbourhood I know well and that’s normally teeming with people. Without people, it is almost unrecognisable. The streets of New York in Struth’s photographs are almost always empty – not abandoned, not exactly, but there is an absence of people precisely where we would expect to see them. When asked by an interviewer in 2015 about the driving force of his work, Struth responded:

I’m interested in the relationship between an individual’s existence and the community of larger social entities. I make impulsive, intuitive decisions, but strangely, when I look back at my work it has to do with existential questions about our restless existence.

In Struth’s unpeopled photographs of New York’s streets, we see the space or context where such relationships occur, and trace the signs of human activity in the form of every window and every square of concrete: what remains in the photographs is akin to Serling’s description of ‘that bizarre quality of activity with no actors’. Having experienced such a feeling by way of Struth’s images, I now recognise it as I pass down the streets of an emptied New York. Oddly, it’s as if I learned through Struth’s photographs a form of empathy for my own feelings.

That long-ago night in February, taking the tram into downtown Berlin from the city’s furthest edge, I felt as if I was seeing the city with sudden acuity, as if everything was a vehicle for meaningfulness not despite but because of its ordinariness. I looked to my left and saw a nattily dressed businessman asleep, his left eye half-open. The light on the roof of the tramcar flickered and I turned toward a young woman wearing combat boots, her face covered in piercings, talking to a small brown dog at her feet. She was saying: ‘Blumen, Blumen,’ the word for ‘flowers’. For a moment, I imagined calling out women’s names, one after another, until she turned her head in acknowledgment. At a stop in Kreuzberg, the more bohemian part of the city, I got off the tram and passed a ground-floor apartment with its wide window opened on to the street. On a table inside, I could see lemons sitting in a bowl full of water and wafts of cigarette smoke drifting into the folds of the curtains. A few blocks on, in an American-style diner, sat two grey-haired women eating toast and jam, a neon sign trembling above them.

I had no specific place to go, so I just kept walking, and looking. It was while walking the streets of that same city that the philosopher Walter Benjamin arrived at the conclusion: ‘Solitude appeared to me as the only fit state of man.’ Perhaps it isn’t that urban spaces, when empty, create a feeling of palpable absence, but rather, when they are empty, we can confront the feelings of abandonment and loneliness that thrum below the surfaces.

The structure for those social entities is present in the buildings and streets and empty cars but, with the people gone, all we have is the absence

With streets and lines stretching into the horizon and away from the viewer, Struth’s photographs of New York emphasise distance – emotional, social, physical – in fairly literal terms. That, coupled with the fact that not a single person is represented in these very urban spaces. Again: ‘Where is everybody?’

Though these photographs belong to a very different moment in New York’s history than now, they are not simply archival. It might be apt to think of O’Hagan’s comments about the Bechers and the depiction of a ‘lost world’, and apply them to Struth’s work. New York was never a gentle place, and that has made it a lonely-making place. It is normally hard to notice that isolation in the daily fabric because of all the din. Now, as people shut themselves up or flee New York altogether, what we find is that it was always a world of lostness.

Given that Struth is ‘interested in the relationship between an individual’s existence and the community of larger social entities’, our act of looking at his images of New York activates that relationship between an individual and the often-unacknowledged feelings of existence of a self among, but always separated from, other selves. The structure for those social entities is present in the buildings and streets and empty cars but, with the people gone, all we have is the absence. What’s revealed is an intrinsic feeling of abandonment that exists everywhere, imperceptible, but lying below the surface of all human spaces.

Where does that leave us, then? In looking at a photograph, we look at something, of course, and inevitably we look as the photographer. We are the seer; we enter into the things seen, even as they enter us. If a circumstantial loneliness can reveal or even manifest a primary, inborn one, then art might allow us to recognise that such a feeling – though always our own – is also something we share with others.