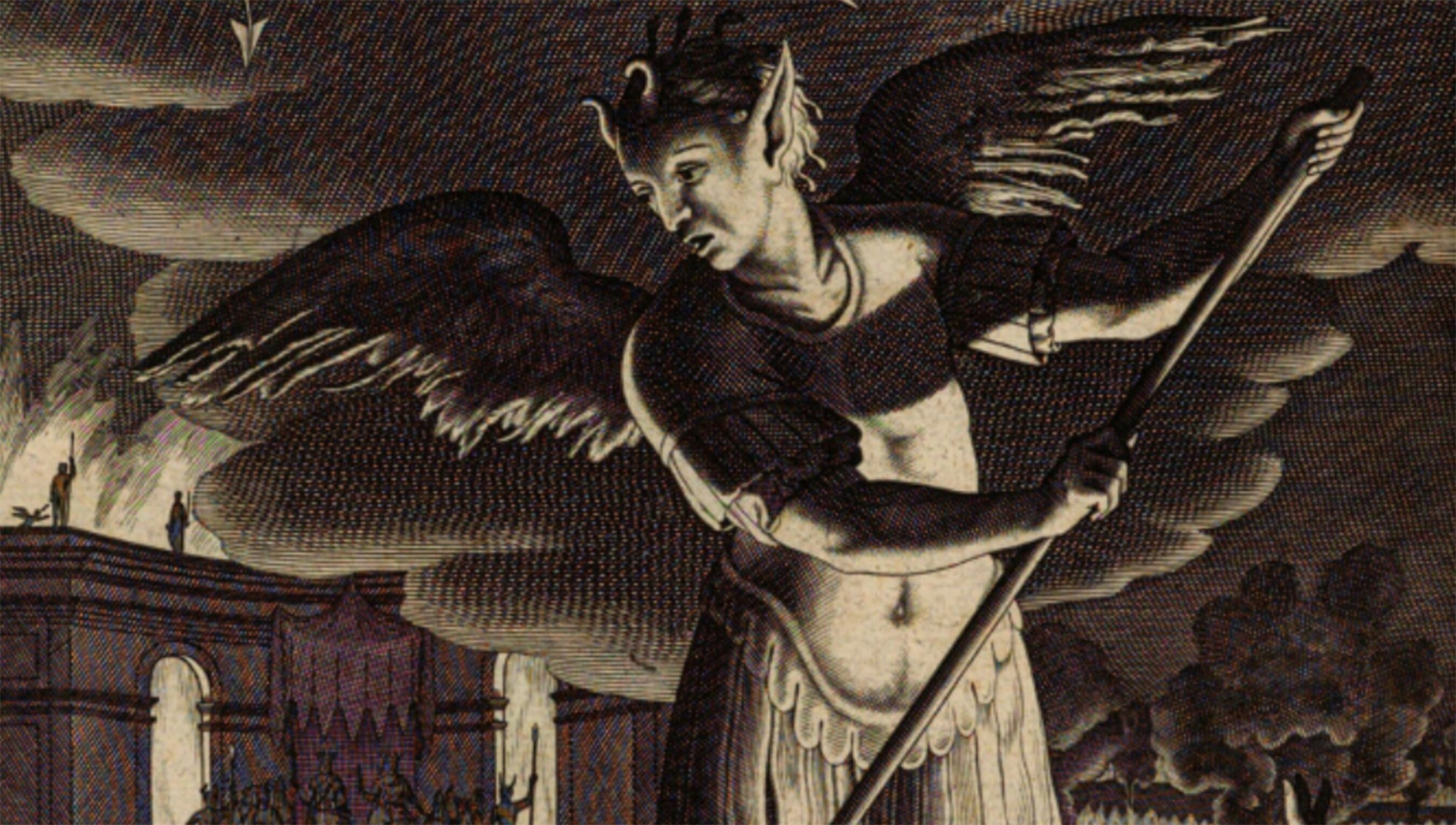 Satan from the first illustrated edition (1688) of Paradise Lost by John Milton. Courtesy the British Library

The Devil you don’t know: the Satan of the 19th century

Satan from the first illustrated edition (1688) of Paradise Lost by John Milton. Courtesy the British Library

is a researcher at the David Geffen School of Drama at Yale University. His most recent book is The Devil and His Advocates (2021).

Most of us have the wrong idea about Satan. We picture a being with horns, wings, claws and blood-red skin; a being who embodies wickedness; a being waging a long, drawn-out war with God and the human race. But the Devil is not a cartoonish figure plotting universal destruction (or, in a gentler mood, possessing young girls and priests). Once upon a time, not too long ago, he was known to move in distinguished circles.

During what historians call the long 19th century, which extended from the beginning of the French Revolution in 1789 to the First World War in 1914, Satan’s career flourished in European literature. This Satan was not the caricature of evil so familiar today but a well-spoken gentleman – at least, sometimes. Each time he appeared, he changed guise; never staying still, he displayed resourcefulness and personality that the best of society could appreciate.

To understand the Devil of 19th-century literature, it’s important to understand the Satan of the Bible. In the Book of Job he is called ‘a son of God’, and he roams the earth as a disinterested – and inconspicuous – supervisor of human affairs. At one point, after making his rounds, Satan returns to the court of the Lord and suggests that Job, God’s most loyal follower, only has faith because he was blessed with material advantages. The heavenly father agrees to an experiment: He will suspend the protection that surrounds the exemplary man and see whether his faith survives. Soon Job is afflicted by theft, storms, fire, violence, boils on his body, the death of his children, and more still. But these misfortunes are not caused by Satan; they are things that can happen to any mortal. Despite it all, God’s favourite remains devoted. The role of Biblical Satan is to put a rare example of human worthiness into relief and, more importantly, to affirm the transcendent power of the Deity. There is nothing commanding, or even particularly ‘evil’, about him. Busy but retiring, the Satan of Scripture is more like a lawyer than anything else. Even in the New Testament, he does not ‘tempt’ Jesus so much as test him (the Greek original allows both translations). Unless asking questions is evil, there is nothing wrong with what Satan does – he inhabits the realm of ideas, not passions.

During roughly the next two millennia, Christian civilisation almost forgot about the circumspect and deferential Satan of the Bible, and the poor Devil acquired an undeserved reputation. However, over the course of the 1800s, he recovered some of his former stature as European authors began conjuring a more complex figure.

For optimists, the eclipse of age-old hierarchies and superstitions that accompanied the 19th century heralded both material and spiritual improvement. The new age promised freedom of conscience, broader political franchise, economic vitality, and unprecedented technological achievement. But there was a darker side to ‘improvement’: religious revivalism, colonial exploitation, class antagonism, and social engineering. The Devil fit right into the commotion as authors sought precisely what their forebears had shunned: intimacy with the ‘bad guy’.

In 1821, the English writer Robert Southey implicitly denounced Percy Bysshe Shelley and Lord Byron as leaders of the ‘Satanic School’ of literature. They were, he wrote, wanton ‘men of diseased hearts and depraved imagination’. Shelley and Byron weren’t really Satanists. They were basically atheists. But the insult was a point of pride; they embraced Satan as an outcast who raged against tyranny on high – a characterisation that owed more to John Milton, the author of Paradise Lost (1667) and an apologist for regicide and revolution, than to anything in the Bible. Paradise Lost is a great Christian epic, second only to Dante’s Divine Comedy (c 1320). But while Dante stuck Satan, cold and miserable, in the deepest pit of Inferno, Milton pictured him as an unleashed menace.

Writing around the same time as the ‘Satanic School’, William Blake did not share his contemporaries’ irreligion or fondness for scandal, but he acknowledged the debt of the literary guild to infernal forces. Milton, he opined, ‘wrote in fetters when he wrote of Angels & God, and at liberty when of Devils & Hell, … because he was a true Poet and of the Devil’s party without knowing it.’ Satanic or not, Romantic authors such as Blake, Shelley and Byron equated the Devil with creative vigour, free expression, and a fiery temperament.

The long-lived lion of German letters, Johann Wolfgang von Goethe, was wiser than his hot-headed juniors. Taking a dim view of Romantic pathos and bravado in his masterpiece, Faust (1808), Goethe made his version of the Devil, Mephistopheles, an embodiment of doubt. Goethe’s titular hero has spent long years familiarising himself with the sum of human knowledge only to conclude that it amounts to nothing. Faust calls on nether forces in the hope of filling a personal and universal void. Mephistopheles shows up and, in exchange for the scholar’s soul, promises to give him what he’s missing. When all Goethe’s fancy language is left aside, what Faust gets is a series of exalted states that translate into sexual infatuation and drunkenness. Under this spell, he manages to forget himself for a while, but he gains no deeper understanding. From the outset, Mephistopheles looks upon the earth as ‘a rather sorry sight’. ‘Man,’ he concedes, ‘moves me to compassion, so wretched is his plight.’

It would be anachronistic to describe the 19th-century Devil as an existentialist (a fashionable philosophical stance in the following century), but that’s much the part he played for sceptical and agnostic authors in Europe at the time. The German poet Heinrich Heine, who appreciatively called Goethe ‘the great pagan’ for the Olympian calmness of his outlook, also sought Satan’s company:

I called the Devil and he came,
His face with wonder I must scan;
He is not ugly, he is not lame,
He is a delightful, charming man;
A man in the prime of life, in fact,
Courteous, engaging, and full of tact.
A diplomat, too, of wide research
Who cleverly talks about State and Church.

Jewish by birth and a reluctant convert to Protestantism, Heine did not adhere to a religious tradition of any stripe, and he viewed politics with irreverence. But not taking things seriously does not preclude knowing that they are serious. Heine is famous for his wit but also for the deep melancholy beneath his sparkling play of words, where devilish verses laugh off the pain of being alive. For Heine, the Devil offered something better than compassion for cosmopolitan types: good conversation. That’s as good as it gets.

A visitor from the underworld could travel to Paris, stroll around at his leisure, and feel right at home

Many others in Heine’s day entertained relations with this ‘delightful, charming man … in the prime of life’. The anthology Le Diable à Paris (1845-46 ) presents a record of such sociability through depictions of the ‘mores and customs’ of the French capital’s inhabitants. Contributors included the novelists Honoré de Balzac and George Sand, the illustrator J J Grandville, the dramatist Alfred de Musset, and the poet Gérard de Nerval, among other notables. The premise of the collection was that a visitor from the underworld could travel to Paris, stroll around at his leisure, and feel right at home in the modern city. The urban intelligentsia harboured few illusions about the bright streets and gloomy alleys they inhabited. On occasion, some of them might even have knelt down and joined the Devil in prayer. One certainly did: Charles Baudelaire.

For Baudelaire, a morbid Catholic voluptuary who turned the rebelliousness of early Romanticism on its head, misery and crime renewed the timeless drama of the human soul, which strives to soar but remains mired in filth. The sinner’s last hope is the Devil:

An appeal to Satan signifies that a spiritual fire is burning; there can be no Devil without God, after all. Baudelaire believed in salvation and damnation, and – as per the teachings of the Church – he believed that humankind is inherently corrupt. But the Church is corrupt, too. Without charity and true Christianity, the poet observes, the ‘leprous and despised’ turn to Satan as an ‘adoptive father’.

As the century grew longer, similarly provocative gestures became almost a matter of course for aspiring bohemians who struck poses somewhere between Byron and Baudelaire. Some evidently did not know what they were up to as they tried practising the dark arts. Thus, in A Season in Hell (1873), Arthur Rimbaud addresses ‘hideous pages torn from my diary of damnation’ to ‘dear Satan’, positioning himself among proud pariahs:

From them I have inherited: idolatry and love of sacrilege; –oh! all the vices, anger, lust … above all lying and indolence.

I abhor every trade. Owners and workers, peasants, the lot of them, mean and petty. The hand which writes is as good as the hand which ploughs. – What a century of hands! – I shall never get my hand in.

Rimbaud expresses no revolutionary ardour, world-weary cynicism, or perverse Catholicism. He has ‘inherited … idolatry and love of sacrilege’, yet he has no idea what to do with them. ‘The hand which writes is as good as the hand which ploughs,’ but he sees no point digging in the dirt. By about the age of 20, Rimbaud was done with poetry. He spent the remainder of his short life seeking adventure overseas. ‘I have never been a Christian,’ he wrote, ‘I understand nothing of laws; I have no moral sense, I am an animal.’ The ingenious but doomed adolescent lost faith in ‘dear Satan’.

The works of Shelley, Byron, Goethe, Heine, Baudelaire, and Rimbaud do not fill even half a shelf in the library of Pandaemonium. All the same, a few things should be clear: where and when the 19th-century Devil shows up, events take an unexpected turn. He is not the crude epitome of hatred and iniquity that the vulgar imagine. Satan enjoys poetic licence; he can trade in white lies, outright falsehoods, and even the truth. Like God, whose will he performs, the Devil stands on the other side of the law.

‘Sympathy for the Devil’ – like many things inherited from 19th-century Romanticism – is almost certainly a bad idea, but the occasional consultation can prove availing. Speak respectfully and keep your distance, and you just might learn something from this ‘diplomat … of wide research’. The Devil you don’t know has a complicated and thankless job.