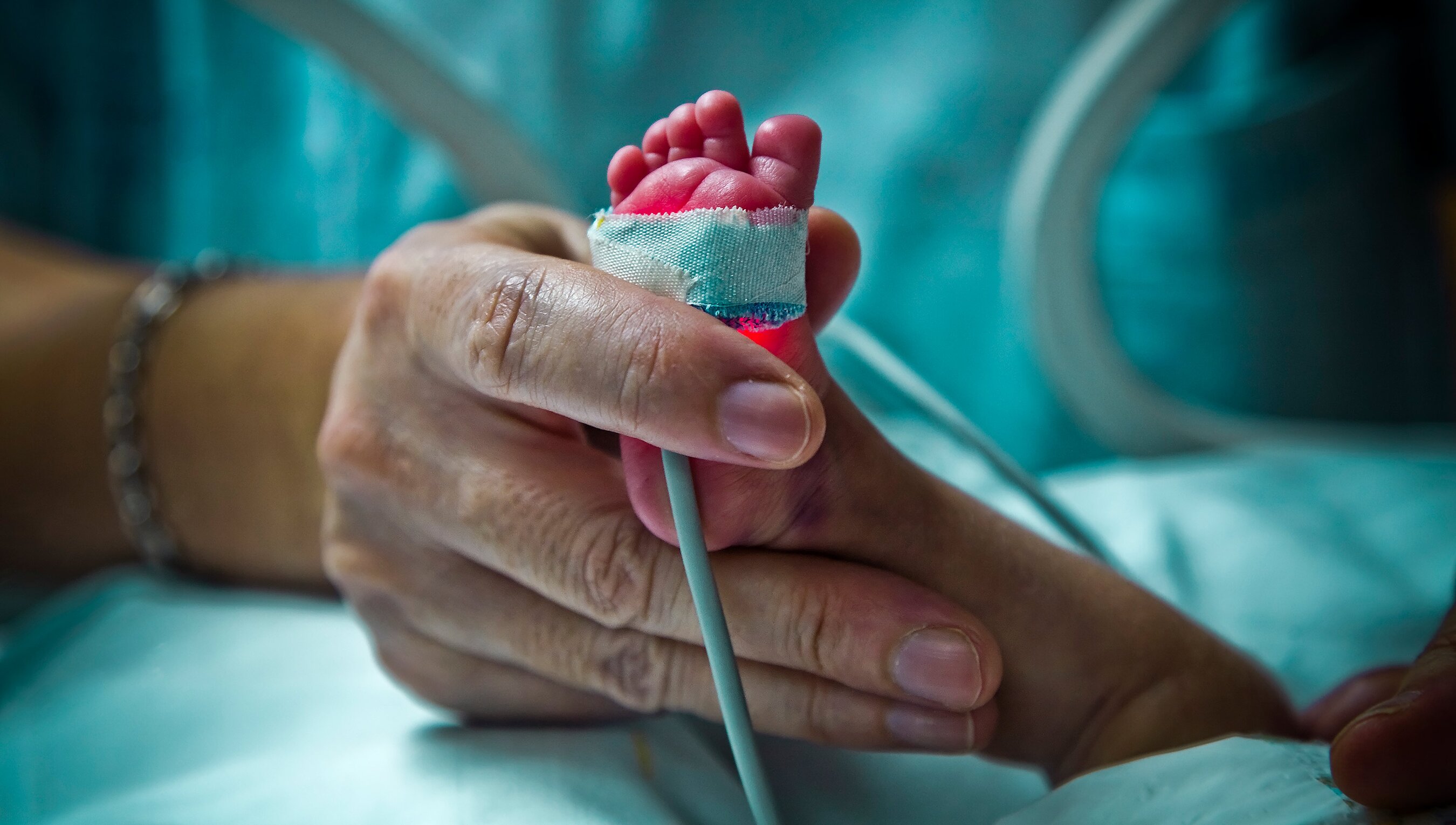 In the neonatal unit at La Paz hospital, Madrid. Photo by Luis Davilla/Getty

The history of the incubator makes a sideshow of mothering

In the neonatal unit at La Paz hospital, Madrid. Photo by Luis Davilla/Getty

is a Wellcome Trust Institutional Strategic Support Fund researcher in law at Birkbeck, University of London.

I spent the first few days of my life in an incubator but, until quite recently, I gave the technology relatively little thought. According to the apocryphal story, the birth of the incubator took place in the Paris Zoo in the late 1870s. The French obstetrician Stéphane Tarnier was so impressed by the heating devices that the zookeeper used to hatch eggs, he asked him to build a similar box (a ‘couveuse’) for what were then called ‘weaklings’ or premature and low birth-weight infants at the maternity hospital.

The idea wasn’t entirely new. In Europe, those caring for new babies often used hot-water bottles and blankets after the birth; where available, they also deployed higher-tech interventions, such as metal warming tubs (‘warmwännen’), heated by a jacket of warm water. Tarnier’s incubator probably drew on these earlier designs, and was reasonably modest in its ambitions: a couveuse would likely have been used for babies born no more than a week premature. Yet his invention was significant, not so much for its novelty or impact, but because it framed the premature baby as an entity distinct from full-term infants.

Tarnier felt that he was on the cusp of enabling premature babies to survive from a significantly earlier point in gestation. This confidence gave rise to a tension that would permeate much of the subsequent scientific and popular literature: was the incubator intended to enhance connection between the premature infant and its carers – to act as a bridge to the mother? Or was it intended to replace her?

Many doctors and scientists cast the early incubator as an environment that was safer than a ‘real’ uterus, as the medical historian Jeffrey Baker writes in The Machine in the Nursery (1996). Tarnier and his protégé Alphonse Pinard believed that the incubator should remain a closed system, self-contained and impenetrable to light, and ‘analogous to the womb’. In Germany in the 1880s, the gynaecologist Franz Winckel trialled a ‘permanent water bath’ at Dresden Royal Maternity Hospital, in which the baby would be suspended in a pool of warm water, just as it would have stayed in the warm amniotic fluid had its birth gone to full term. These attempts to recreate the womb were accompanied by early obstetricians’ concern that mothers themselves, with their unsanitary practices, irresponsible behaviour and anxious fussing, might pose a danger to their infants – a danger that could be curbed by placing the uterus-incubator firmly in the doctors’ hands.

Other obstetricians favoured a more open model that brought together maternal and medical care. The French physician Pierre Budin emphasised the connection between mother, premature baby and nurse. His incubator was glass-topped and placed at the end of the mother’s bed in the belief that keeping the infant within her view would help with attachment.

Even so, the press and public in Europe and the United States relished the idea of using the technology to replace rather than enhance maternal connection. Incubators became something of a fairground attraction, generating enthusiastic crowds at the various world fairs and expositions that sprung up in the Victorian era. The hermetic-womb model became particularly popular following the launch of the Rotch-Putnam incubator at the World’s Columbian Exposition in Chicago in 1893. The American paediatrician Thomas Rotch believed that his device should mimic the womb by creating ‘a condition of darkness, silence, and warmth’. Although it had a glass cover, the Rotch-Putnam incubator – tellingly called a ‘brooder’ – was shrouded in black cloth, and included built-in scales to weigh the baby without removing it. The French physician Alexandre Lion found success with a similar model, creating an incubator that included a thermostat and heating system intended to function without the need for nurses.

The implication was that the maternal body was inconsequential, a mere container

Meanwhile, an incubator on display at the World’s Fair in London in 1897 sparked rumours that it had become possible to grow babies like orchids in a hothouse. A song about breeding a nation by means of incubation soon began doing the rounds. The Graphic magazine dubbed the incubator ‘An Artificial Foster-Mother’, suggesting that the technology was a glass replacement for the human uterus. In Germany, the physician Martin Couney, who’d worked with Lion, unveiled the ‘child hatchery’ (Kinderbrutenstalt) at the 1896 Berlin Industrial Exposition, and went on to take the incubator on tour, replete with live babies, through France, Britain and the US. Eventually, in 1903, Couney established a long-standing baby-and-incubator display at Luna Park in Coney Island, New York.

The wider medical community was not immune to this enthusiasm. By insisting that gestation could be easily automated, contemporary physicians conveyed a disdain for the relational aspects of human pregnancy in favour of representing premature babies as isolated entities. Commentators in The Lancet and the British Medical Journal insisted that incubators were autonomous, ‘requir[ing] no constant and skilled care’, while others emphasised how much more pleasant they looked than a flesh-and-blood womb. Articles in the press called the holes that punctuated the incubator ‘orifices’, suggesting ‘that the incubator was in fact a stand-in for the maternal body that had ceased to perform its reproductive duties’, as the historian Nadja Durbach writes in her study of the incubator during the Victorian period.

While contemporary authors praised the incubator for its purported physical similarities to the womb, the care that mothers provided during and after gestation was conspicuously absent – the implication being that the maternal body was inconsequential, a mere container. Such speculation flourished despite the objection of some researchers who maintained that infants within incubators required expert human care. The belief that human pregnancy might become technologically obsolete also had unmistakable eugenic overtones: Pinard in fact went on to found the French Eugenics Society, and was explicit in the use of these ideas in his own work.

More than 100 years later, the idea of replacing gestation retains some of its fairground buzz. In 2017, scientists at the Center for Fetal Research in Philadelphia successfully gestated premature lamb foetuses in a fluid-filled ‘Biobag’. The lambs were removed from pregnant ewes at the equivalent of 23 weeks’ human gestation, and remained in the Biobag for up to four weeks. In the 1880s, a human baby born even a week early was unlikely to survive; today, human foetuses become ‘viable’ around 23-24 weeks, although illness and mortality for neonates born before 28 weeks remains high.

Just as the incubator helped to delineate the premature baby from other infants, modern artificial-womb technology represents a shift from treating the extreme neonate ‘as a foetus, not as a baby’, as Emily Partridge of the Biobag research team told interviewers. As of 2020, research toward a prototype is ongoing in the US, Australia, Japan, and the Netherlands. As Partridge put it, the technology aims to ‘bridge the rough patch’ from approximately 23 weeks through to 28 weeks.

Despite the careful caveats of clinicians, partial artificial wombs – like their incubator predecessors – have invited speculation that full external gestation (ectogenesis) might be upon us. From modest if promising reports of animal trials, media coverage swiftly turned to think-pieces on how the imminent arrival of automated gestation would affect abortion, gender equality, and human connection, with titles such as ‘Artificial Wombs Could Soon Be A Reality. What Will This Mean For Women?’ (The Guardian), ‘Weighing The Ethics Of Artificial Wombs’ (The New York Times) and ‘Artificial Wombs Are Coming. They Could Completely Change The Abortion Debate’ (Vox).

Most responses to artificial-womb technology radiate the sense that it is unprecedented. Of course, the innovation deserves its due – but anxieties around the future of artificial wombs, and debates over whether it is a maternal bridge or maternal substitution, are ones that we have seen before.

The discourse around the Biobag has echoes of the Rotch-Putnam fantasy of autonomous incubation. It is described by its inventors as ‘a single-use, completely closed system … that can be customised to more closely replicate the size and shape of the uterus’. It is translucent, sound-permeable and flexible to allow for ‘monitoring, scanning, and manipulation of the foetus as necessary’ without removing it from its enclosed environment. In fairness, the Biobag researchers have placed great importance on protecting the mother-and-baby bond – both through the features of the technology’s design, and through their explicit rejection of any link to the project of ectogenesis. The clinical prototype has ‘many features that should allow the parent to be connected with the foetus’, they write, including ‘the ability to play maternal heart and abdominal sounds’.

Today, any obstetricians attempting to display premature babies for public gratification would find their operation shut down. Yet the fairground shows of babies in incubators have parallels in the images that our contemporary media circulates of fragile lamb foetuses pressed against the clear plastic of the Biobag. Likewise, we can find modern correlates of doctors holding up incubators to the public gaze – such as the recent collaboration between Máxima Medical Center and Next Nature Network, both in the Netherlands, which produced a largescale mockup of an artificial womb that went on display at Dutch Design Week in 2018 before travelling to other locations. The promotional images of a gynaecologist standing before giant red inflated balloons, representing the designs for an ectogenic womb, contain whispers of the Victorian crowds who lined up to glimpse infants within their ‘artificial foster-mothers’.

What’s perhaps most striking over the long and troubled history of artificial wombs is the persistent assumption that gestation could be fully automated. The idea appears to spring from politically divergent impulses. On the one hand, a disdain for pregnant people, such that replicating the work of their bodies seems like no mean feat; and, on the other, a frustration with a world in which the burden of reproductive labour still falls so heavily on women.

To this day, Western publics seem much more invested in the idea of the incubator-artificial womb as a replacement to gestation, rather than as a bridge to human care and a device that will always require a network of people to make it run. Infants in incubators have always been cared for by nurses, as the women’s studies scholar Irina Aristarkhova argues in her book Hospitality of the Matrix (2012). Yet when we fantasise about ectogenesis, the relational features of human pregnancy – the entangling of pregnant person and foetus – usually go unremarked. However early a technology might let neonates leave their cases of glass and plastic, it’s almost certain that they will still depend upon the love of one human, at least.