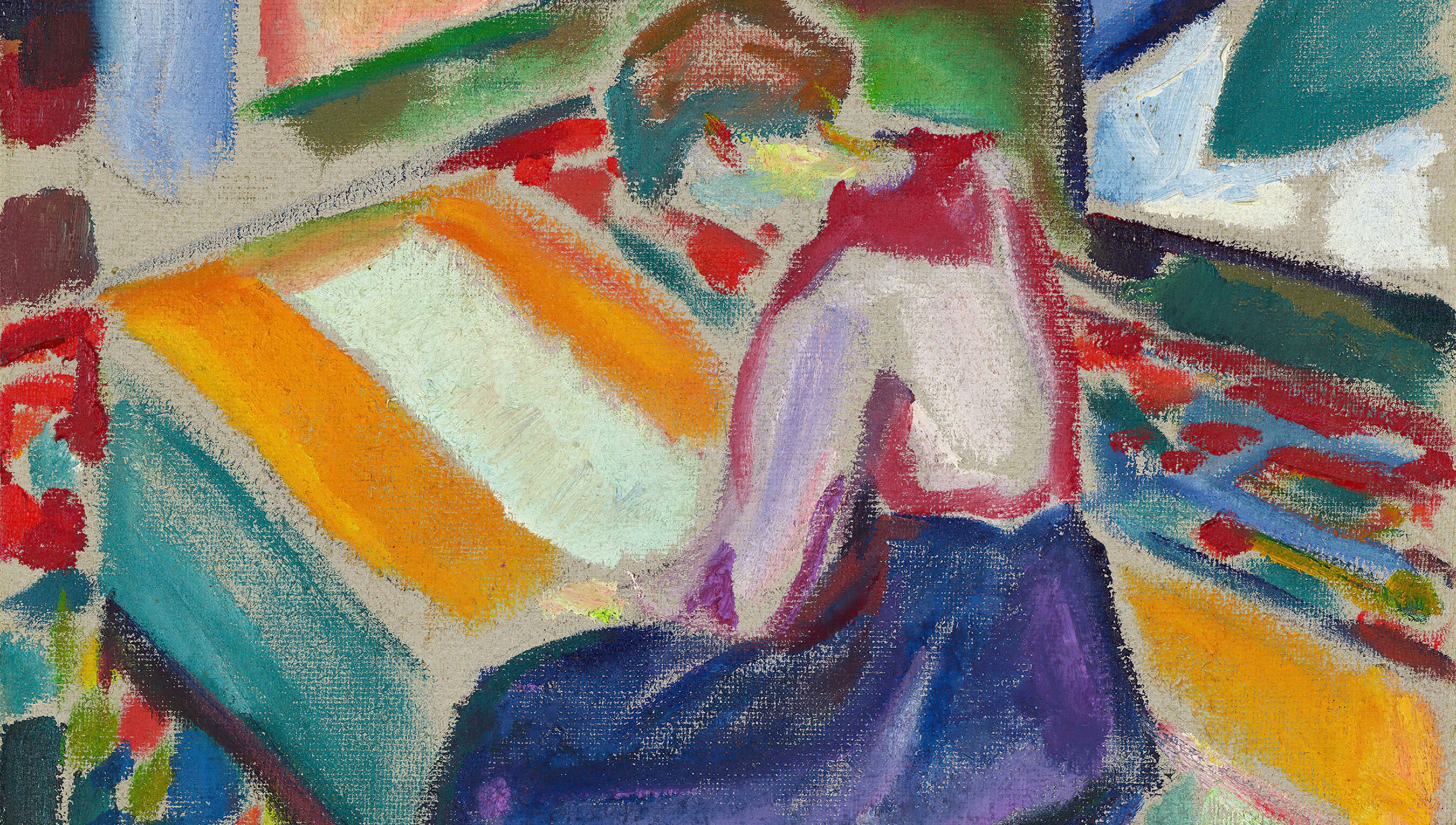 Detail from Woman Seated on a Couch (1919) by Edvard Munch. Courtesy the Munch Museum, Oslo

The power of slow therapy, revealed in two pioneering memoirs

Detail from Woman Seated on a Couch (1919) by Edvard Munch. Courtesy the Munch Museum, Oslo

is professor of psychology at the City College of New York and professor of philosophy at the Graduate Center, CUNY. He is the author of Minding Emotions: Cultivating Mentalization in Psychotherapy (2018), and co-author of the forthcoming book, Working with Parents Across the Lifespan: A Mentalization Informed Approach. He writes the monthly online newsletter Mental(izing) Health.

You’ve probably heard of cognitive behavioural therapy, a form of psychotherapy that lends itself to research trials and is deliverable in a short, efficient, standardised form. Many clinical psychologists today regard this kind of ‘evidence-based psychotherapy’ as the future. Some do so cautiously, some posturing hubristically. Others are sceptical, either for valid reasons or out of closed-mindedness. I’m an agnostic on this matter, more interested in how evidence-based approaches might address their shortcomings and reach their potential.

To this end, an important first step I suggest is to pay closer attention to our therapy clients and find better ways to listen to, and respond to, their feedback. Encouraging our own clients to write freely about their experiences in therapy would help, but I find that there are also rich insights to be gleaned from published memoirs. They can remind us of the value of slower ways of doing therapy that are supposedly passé.

Two extraordinary, trailblazing examples of the genre by Lucy Freeman (1916-2004) stand out. In 1940, Freeman was one of the few women hired at The New York Times, becoming the first person to cover mental health news; indeed, she invented this as a legitimate beat for a reporter. A prolific author of more than 70 books, her two therapy memoirs provide the first detailed, authentic account of experiencing psychoanalysis from the client’s point of view.

The first, Fight Against Fears (1951), sold more than a million copies. The story begins with Freeman’s suffering, which leads her to sign on to psychoanalysis as an adventure, not quite knowing what to expect. Initially, she insists that she did not recall much about her childhood and that it had been happy. She is encouraged to provide more detail by JH (her analyst) and begins to realise that she often felt lonely and had an acrimonious relationship with her mother and an idealising relationship to her father. I imagined that a psychoanalyst would thrill to make an Oedipal interpretation. Instead, JH focuses on the absence of love and nurturing in Freeman’s family of origin, sins of omission more than commission, in his words. This surprised me, and it prompted me to feel a concern that we – many contemporary psychologists and society at large – have become too comfortable accepting a distorted, caricatured image of psychoanalysis.

There are potential lessons here for how psychotherapy is practised today, whatever school a therapist comes from

Freeman responds well to her analyst’s effort to explore the past, realising, for instance, that it was mainly when sick that she received attention at home. Another painful memory comes to light: proudly showing her mother a poem she had written, only to have her mother react by doubting that she was the author. The portrait that emerges is of an invalidating environment, characterised by explosions of hostility. As the analysis deepens over time, Freeman and her therapist dwell on the legacy of fear that haunted Freeman and interfered with her being able to connect with others.

There are also cringeworthy moments in the memoir, such as JH’s apparent sexism (he implies that becoming a journalist occurred at the expense of Freeman’s identity as a wife and mother); some predictable homophobia; and a strange moment of unabashed advocacy of corporal punishment. Freeman never learns much about JH because of his neutral stance, but she does glimpse his lack of enthusiasm about diagnosis and his scepticism about research, which I saw as unfortunate manifestations of psychoanalytic smugness. At this point I found my initial positive impression somewhat eclipsed by troubled, disheartened feelings.

Ultimately, though, Freeman depicts JH as kind, attentive and helpful, and there are potential lessons here for how psychotherapy is practised today, whatever school a therapist comes from. Indeed, JH does not fit the image of a psychoanalyst that I conjure from those heady days of the field: he is not dogmatic or domineering, and he does not engage in or endorse parent-blaming. Rather, he helps Freeman to become less self-indulgent and more empathic in understanding how her parents’ own history played out in the way that they parented her. Moreover, JH makes room for her to take the lead in exploring her own mind. This particularly perked my attention, as it clearly anticipates contemporary psychology’s focus on the quality of the therapist-client relationship as being a key component of effective therapy. This analyst had his faults, but he was no guru and was persistently devoted to his client’s welfare.

How does Freeman characterise the benefits of psychoanalysis? Her sinusitis disappears, and she no longer whispers in a voice that others could not hear. But Freeman regards the analysis as transmutative on a deeper level, helping her to develop the capacity to think about feelings, value the integration of thinking and feeling, and become appropriately vigilant about the boundary between self and other. As a consequence, her siblings play a bigger role in her life, and she becomes closer to them. Freeman concludes her first memoir by affirming a string of ‘c’ words: compassion, control, conviction, calmness, compromise, and courage. In valuing the importance of learning flexible psychological skills over achieving static insights, I found Freeman’s description of her therapy startlingly contemporary. In fact, her understanding of the goals of psychotherapy resembles what we might now regard as improved ‘mentalisation’ or the ability to think about one’s own thinking and feelings.

In Freeman’s second memoir published decades later, The Beloved Prison (1989), she commences a new analysis with a female therapist, picking up the pieces after a disastrous marriage that occurred after her time with JH. She traces the unfolding of a profitable relationship with her new therapist – until the woman’s premature death. Freeman then embarks on a new treatment, but this third analyst behaves badly: she eats dinner in sessions, criticises Freeman’s clothes, and turns flagrantly unempathetic after Freeman goes through an abortion.

Her fourth and final psychoanalysis, with the therapist ‘DA’, turns out better. From the outset, there is what’s known as ‘positive transference’ (the projection of positive feelings from another relationship onto the therapist): DA is described as a young, handsome man who carries himself in a modest way. Over the course of this treatment, Freeman becomes more comfortable with intense emotions, fully experiencing the anger and anxiety that were identified earlier as issues by JH. She describes her evolution to bear rage against DA as well as her parents, which he responds to with enthusiasm. The trust that she accords to DA leads her to trust in and be more comfortable with herself. Freeman is able to escape the ‘beloved prison’ that was her life, but now she faces the challenge of leaving the prison of the couch as well.

Freeman became a passionate advocate for psychoanalysis and she deserves admiration for her valuable contribution to the field, all the more so in our era of evidence-based practice, in which one must strain to hear clients’ voices. Freeman offers us an astute glimpse into the convoluted path that therapy typically takes and she underscores how the relationship to the therapist is crucial to the experience, especially in establishing an environment in which the client can take the lead. Perhaps the most striking indication of her transformation is that she succeeded in writing such creative, self-revealing books.

Although Freeman’s faith in psychoanalysis has the zeal of a convert, she provides compelling testimony that forces us to reckon with why long-term work was necessary. But what do we make of the fact that Freeman’s first successful analysis is followed by a disastrous marriage, and that she continued to seek out multiple analyses to help her deal with her suffering? She addresses this by asserting that her fate would have been worse without all the analysis. She insists that psychoanalysis was ‘the best investment’ and that it bestowed a sense of abiding peace.

While awkward in spots, Freeman’s documentation of her analysis provides a reminder of a time when therapy could be exploratory without pre-established limits. Such an adventure might well be labelled as a luxury of a bygone era, but it is hard to deny the benefit of investing time and effort to gain as much self-understanding as possible. We live in an age where there is a plethora of treatments, and long-term therapy might not be the best choice for everyone. Yet, it is still the option that provides the greatest potential rewards. Let’s not kid ourselves: no serious work of art and no serious thinking support the notion that self-knowledge and character change follow a short, narrow, linear path. Reading Freeman in 2022 serves as a stark reminder about the diminution of expectations for mental health treatment in our own time.

My emotions fluctuated wildly while reading Freeman’s two memoirs, eluding easy identification, modulation or expression. Not only was I often surprised, I found myself quite envious of her opportunity to engage in therapy at a pace that was not at the mercy of practical constraints. Yet I also felt disappointed by my field’s failure to acknowledge her intrepid path. Indeed, it is impossible to read Freeman without recognising how much feminism has transformed the landscape of mental health and our culture at large. I was impressed that the process was so lively and unformulaic. What if we take seriously that setting goals in therapy from the beginning might interfere with the subsequent process of discovery? What if we were to construe false starts and mistaken directions as unavoidable, par for the course, and sometimes illuminating? What if we were determined to aim higher and not rest content with mere symptom relief? Here’s my challenge to the evidence-based crowd: you must take adequate precautions not to provide clients only with what you have to offer, at the expense of what they actually want.

And what about psychoanalysis? Today, it survives in humbler forms than Freeman experienced, but it continues to affirm a commitment to the vast unruliness of the mind, cultivating reflection on emotions in relation to past history, and persevering in the elusive search for wellbeing, as Freeman proclaimed many years ago. Her work lends strong support to the value of long-term therapy and the need to make room for what clients have to tell us about the work that we do.

Psychoanalysis and the unconsciousMemoirTherapeutic relationships
2 March 2022