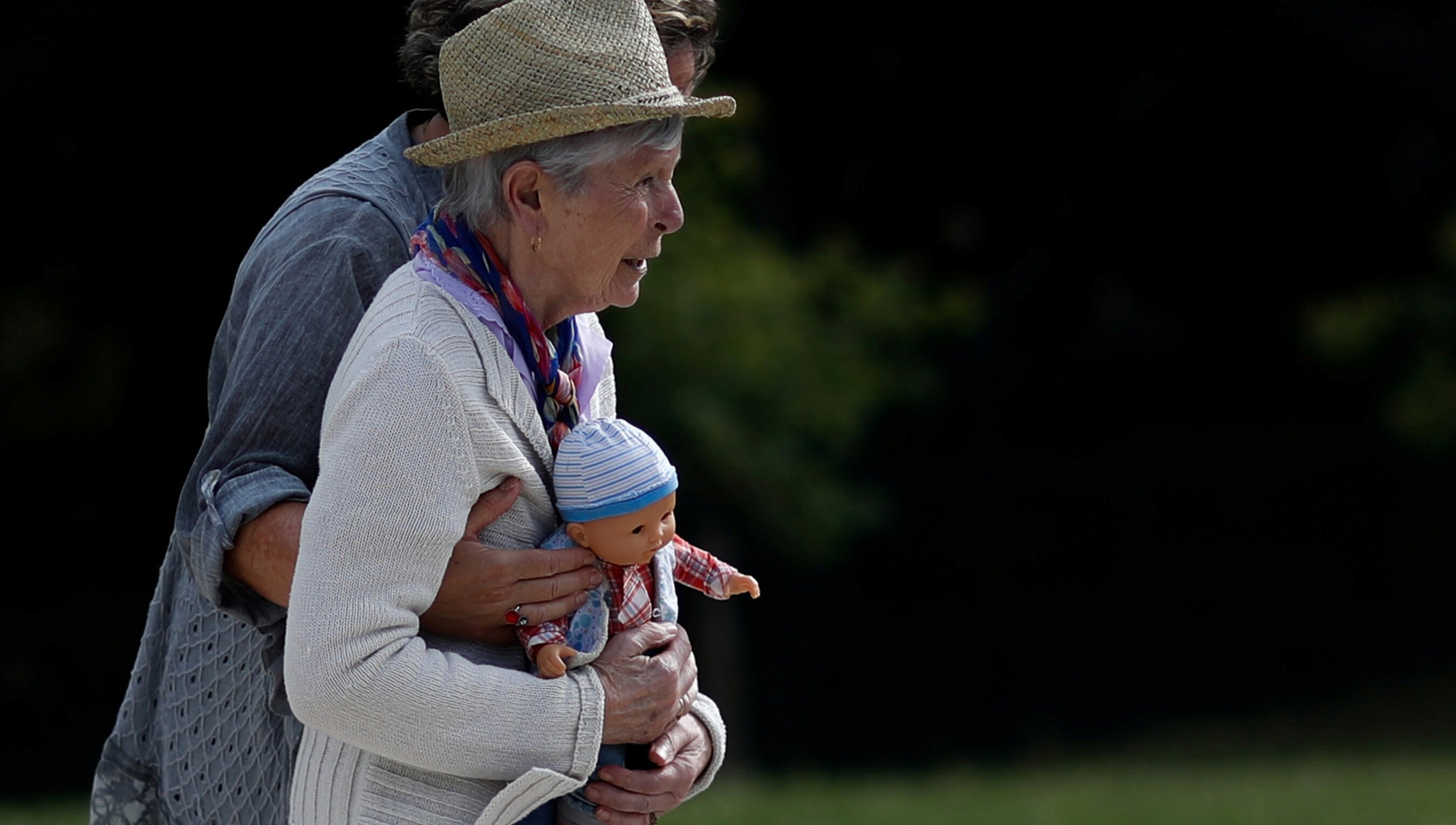 The radical impact of seeing Alzheimer’s as a second childhood

is a professor in the Department of English at Kansas State University, where she teaches scientific and technical communication. Her latest book is Mind Thief: The Story of Alzheimer's (2021), a comprehensive and engaging history of Alzheimer’s that illuminates our efforts to understand the disease.

In Buddhism, this cyclicality is known as Saṃsāra; in Taoism, Lunhui. Both are intricate concepts rooted in ancient theologies and scripts, but one doesn’t need to be religious to appreciate the circularity of life. To many, it’s simply a way of being. It says that, when we fight our way into this world as a crying infant, we know nothing, have nothing, not even an awareness of the self. Over time, we see, we hear, and we learn. We form the concept of ‘I’, what this ‘I’ likes and dislikes, and over time we come to live for this ‘I’. Eventually, we die, or rather our flesh dies. We give back the things we learned, and once again become a clean slate, perhaps reborn in another body.

The idea that existence is cyclical can bring us a certain composure in the face of life’s tribulations and vulnerabilities. It can help us appreciate the words of the ancient Greek playwright Aristophanes that ‘old men are children twice over’, as well as William Shakespeare’s dictum that old age is a ‘second childishness’. As the Taoist thinker Zhuang Zi said: ‘方生方死’ or ‘Fang sheng fang si’ – at the moment of life is death; at the moment of death is life. The beginning is the end; the end is the beginning.

Such ancient wisdom and literary musing find a close translation in modern neurological research into dementia and Alzheimer’s disease: retrogenesis, meaning backward (retro-) beginning (-genesis). It was proposed by Barry Reisberg, a psychiatrist at the New York University school of medicine, as a model to make sense of the progressive decline in Alzheimer’s. In 1999, Reisberg defined retrogenesis as ‘the process by which degenerative mechanisms reverse the order of acquisition in normal development’. In other words, the deterioration of a patient with Alzheimer’s follows, in reverse order, a child’s normal development. What a child learns first in this world, a patient loses last; what a child learns last, the patient loses first. The beginning is the end; the end is the beginning.

This is not just philosophical contemplation. A body of scientific evidence supports the retrogenesis model. In Alzheimer’s, we generally witness the gradual decline of two kinds of abilities: cognitive and functional. The former refers to capacities such as attention, memory, language and orientation. The latter refers to abilities to perform daily living tasks from dressing and eating to shopping and handling finances. Multiple tools have been developed to assess the extent of these skills in patients with Alzheimer’s, such as the mini-mental state exam (MMSE) for cognitive abilities and the interview for deterioration in daily living activities in dementia (IDDD) as a measure of functional decline.

When researchers in 2012 used these tools to compare the cognitive and functional abilities of 148 elderly participants and 181 children, they found much to support the retrogenesis model. Patients with Alzheimer’s who were at the very early stage of the disease obtained cognitive MMSE scores comparable with those achieved by children around the ages of six and seven. As the disease progresses, patients’ MMSE scores gradually dropped to the level of a five-year-old and, then, below that of a four-year-old. As for their functional abilities, patients with mild to moderate Alzheimer’s had IDDD scores comparable with those obtained by children aged seven to four, respectively. Patients with severe Alzheimer’s obtained IDDD scores below the level of a four-year-old.

Even in emotional development, there tends to be a reverse relationship between childhood and Alzheimer’s

Even in emotional development, which can’t be charted with the same precision, there tends to be a reverse relationship between childhood and Alzheimer’s. For example, children aged between two and five tend to use temper tantrums and verbal outbursts to make their frustration known. Alzheimer’s patients at corresponding stages of their second childhood also have that approach.

Why would this reverse correlation happen? What, if any, mechanisms in the brain account for it? In childhood and early adulthood, brain development is not a homogeneous process. It starts in the so-called ‘primitive’ regions – those that allow basic functions such as processing visual information (the visual cortex) or sensing touch and warmth (the somatosensory cortex). The more evolved or higher-order brain regions mature later, such as those that enable reasoning and problem solving (the frontal lobe). In Alzheimer’s, brain damage happens to follow a reverse order. Patients first lose their higher-order abilities such as memory, language and reasoning, but hold on to their visual, sensory and motor skills for a longer time.

Researchers speculate that what lies behind this first-in, last-out pattern are axons – the long, slender fibres extended from neurons, like the brain’s electrical wires. Axons conduct electrical impulses away from a neuron to be received by other neurons so that information can be relayed and processed in the brain. Just like wires need to be insulated for their protection and proper function, axons are coated by a sheath of protein and fatty substances called myelin. This myelin sheath doesn’t develop simultaneously all over the brain’s axons. It grows first around axons that are critical for a child’s early survival: for example, axons that enable sensory and motor functions. Over years, then, these axons accumulate thicker myelin, which, like thickly coated wires, are less susceptible to damage.

By contrast, because babies don’t need language and self-control to survive, so axons that are involved in higher-order abilities don’t develop myelin until later in the process, and possess only a thin coat of protection. These axons are the ones that are more liable to damage in old age. When that happens, signal-exchange between neurons slows down or becomes blocked, abnormal protein deposits called tangles spread and choke neurons to death, corresponding brain functions are lost, and childhood is reversed.

As with all contemporary theories that try to explain Alzheimer’s, the retrogenesis model has its problems: for, when we really scrutinise them, our first and second childhoods aren’t exactly mirror images of one another. In children, the ability to perform basic activities such as dressing themselves and complex activities such as handling finances develop simultaneously. That is, with increasing age, children tend to have progressively higher overall functional abilities. By contrast, in Alzheimer’s, functional decline clearly discriminates. Patients lose the ability to perform complex tasks first, while basic abilities hang on for a while longer, sometimes persisting into the late stage of the disease when patients should have been, according to retrogenesis, no more capable than infants.

A further example concerns language, which isn’t always a predictable, straightforward story in reverse. According to the retrogenesis model, patients with late-stage Alzheimer’s, like infants, can utter only a few words. But in reality, a great deal of individual differences exist: some patients are able to produce one word; others, up to 252 words. In some cases, patients with severe Alzheimer’s dementia retain the ability to communicate humour, irony and sarcasm, which are metalinguistic abilities developed late in childhood, and thus should have been lost sooner.

In this second childhood, we don’t lose the ability to be content; we just lose the obsession to seek contentment

Moreover, pathologically speaking, multiple hypotheses exist on the ultimate cause of degeneration in the Alzheimer’s brain: the accumulation of the protein fragment beta-amyloid, the spread of the abnormal protein tau, the dysfunction of brain metabolism. In other words, various factors other than myelin play a role in the Alzheimer’s brain.

So retrogenesis is just that, one of several competing theories. While evidence supports its broad pattern, its details could do with correction. Yet you don’t need to follow retrogenesis religiously in order to glean some sense of peace and grace toward Alzheimer’s – just like you don’t need to be a Buddhist or Taoist to take comfort in the cyclicality of life. And the professionals, psychologists, therapists and social workers don’t need the retrogenesis model to be strictly true in all respects before they envision activities and care programmes that accommodate patients’ changing abilities, while also protecting their sense of pride and wellbeing.

Just as a newborn thrives on your tender voice – and the soft hugs and kisses that come with it – without having to understand the ‘I love you’ that you whisper, your grandpa, who no longer understands the words you utter, will too. Just as you praise a toddler for trying to help around the house and ignore the mess he makes in the process, you might want to compliment your mother for her lovely singing, not fret about her no-longer-lovely cooking. Just as you let 10-year-olds play, run and exercise while secretly admiring their unfailing energy, take comfort in the fact that the patients with Alzheimer’s under your care might want to walk and wander – and do respect their natural desire. Rather than antipsychotic medication or physical restraints, engage them in simple games and exercises to reduce agitation or even pair them with young children who are at similar stages of development for mutual joy and satisfaction. Ultimately, focus on what they, young or old, have, not on what they haven’t got from this world or what they’ve returned to the world.

No, none of this will change the fact that Alzheimer’s is a cruel disease. None of this will bring someone ‘back’. But in the absence of an Alzheimer’s cure, we can at least change the way we think and approach the disease. If we’re willing to give up our stubborn belief that life must be progressively linear, then when our parents or grandparents – or, indeed, when we – start to fade away, we might accept it as the beginning of a new cycle. In this second childhood, we don’t lose the ability to be content; we just lose the obsession to seek contentment. When our conscious mind drifts, we’re not so much losing something we’re entitled to as returning to the way we first came into this world. When the ones we care about deeply enter their second childhood, we’re not so much losing them as gaining another opportunity to love, praise and accept as they approach life’s end and its beginning. Fang sheng fang si. The beginning is the end; the end is the beginning.