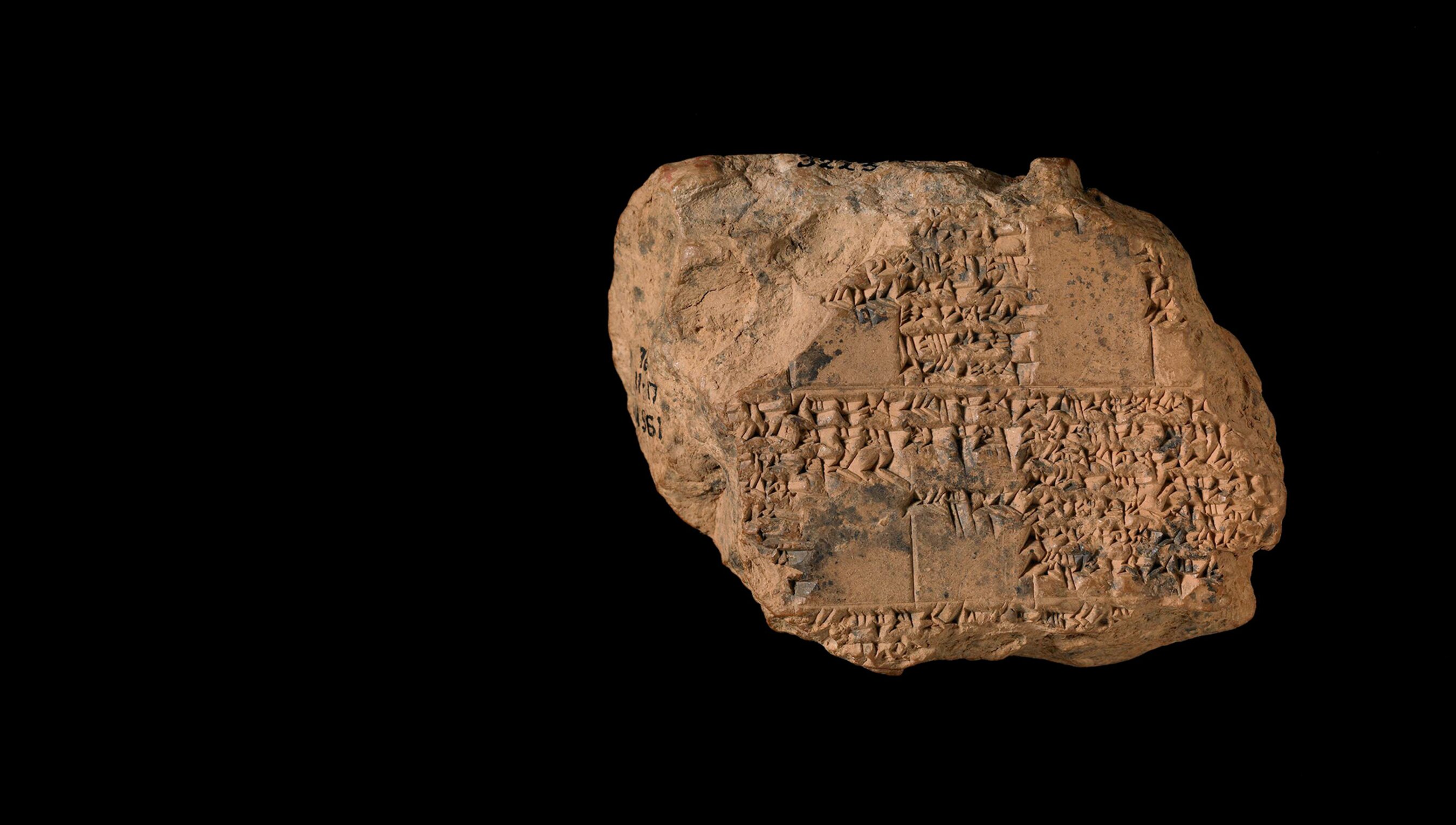 What did the ancient Babylonians discern in the skies above?

is a historian of the ancient Near East with a focus on the science and scholarship of 1st millennium Mesopotamia. He is a research associate at the University of British Columbia, and the author of The Micro-zodiac Texts from Seleucid Babylonia (under contract). He lives in Vancouver, Canada.

Almost 2,700 years ago, a Babylonian astronomer wrote on a clay tablet the observations he had just made from the top of the ziggurat: ‘The Sun and Moon were in opposition at sunset, Mercury had its last appearance in Pisces (before disappearing behind the Sun) and Saturn also had its last appearance in Pisces.’ Glancing at the overcast skies, the writer added: ‘The day was cloudy, I did not watch.’

So many thousands of years ago and with no instrumentation other than eyes and mind, and despite cloudy weather, this astronomer produced an accurate observation of two planets. What does it mean to record an observation that you did not actually see? How does the co-mingling of scientific theories and our sense of sight produce observations of the world around us?

The way in which we see the world is as much a product of the stimuli generated by our optic nerve as by our mental models of how things work. Astronomical records from ancient Mesopotamia give us the first evidence in history of scientific observation as a way of seeing dependent on theoretical understanding. We can begin to gain a better appreciation of the history of the relationship between observation and theory from the records left by the highly skilled astronomers of ancient Babylonia. They wrote thousands of cuneiform tablets in ancient Mesopotamia, which were buried for millennia. Modern translations of their work give us a window into a highly technical practice of observing the sky with ancient eyes and complex theory, or in other words the practice of celestial ‘observation’.

Babylonian astronomers wrote observations in cuneiform, a complex script invented around 3200 BCE and in continuous use up until the 1st century CE. They lived in southern Mesopotamia (modern-day Iraq) in the cities of Babylon and Uruk around the second half of the 1st millennium BCE (500-0). They were the inheritors of thousands of years of scholarship and theory about the sky above them. To note that they watched the sky religiously is not a pithy antiquated characterisation of their work, but a matter-of-fact description of their theoretical conception of the world: the planets as gods moved through the heavens by divine design.

There is no way to separate religion and science in the ancient world. Their observational practice was recorded on clay tablets called ‘regular watching’ (naṣāru ša ginê), which compiled together hundreds of years of records about movement in the sky, water level in the rivers, economic prices and historical events. They also wrote procedural and theoretical works about how to calculate the movement of planets and, importantly, the meaning behind their appearance in certain places of the sky (ie, astrology). They invented the idea that configurations of the heavens could have an impact on one’s personal life, also known as horoscopes. The astronomers of ancient Babylonia were equal parts astronomers and astrologers, there was no distinction in the ancient world, the two (modern) fields worked in close harmony.

As far as we know, astronomers of ancient Mesopotamia lacked any instrumentation that would make sighting objects in the sky any easier than naked-eye astronomy. They worked only with their eyes and the theoretical knowledge in which they had spent most of their lives training. And here is the crux of the historical and theoretical problem: how did their sense of sight (as in the capacity for their eyes to transmit images to their brain) interact with their (highly trained) sense of astronomical movement? Modern scientists in lab settings do something similar; they read instrumentation or observe colour change and impute scientific knowledge from the sensory data combined with their theoretical understanding of the conditions. A chemist or biologist reading the marks on a graduated cylinder uses their eyes to locate where the bottom meniscus of the liquid intersects with the lines present on the glass. This involves both the sense of sight and a theoretical understanding of how the surface tension of liquids behaves in restricted spaces. Another example, closer to the work of ancient astronomers, is the understanding of redshift (ie, the increase in wavelength as objects move apart) as determining the relative speed of objects in our galaxy. Colour perception, as recorded by the eyes of the observer, is used as the input data for a theoretical understanding of how wavelength and frequency change, based on relative velocity.

So what was the theoretical understanding of ancient Babylonian astronomers? Their models of celestial movement were remarkably accurate and accommodated the complex dynamics of planetary motion. Of course, fundamentally, they described a solar system that we now know is not accurate. For them, celestial bodies moved across the sky in giant arcs, sometimes reversing in what we now call retrograde motion; they were less interested in the configuration of the solar system than the regularities of its movement. But, over the course of the 1st millennium BCE, they iterated and improved upon their systems of prediction by leveraging an increasing amount of observational data and continuous testing of predictions.

They deduced systems that modelled the appearance of the Moon throughout a lunar month that included the variability in velocity near the new Moon. Their models for planetary motion preceded developments thousands of years later by Sir Isaac Newton and others in the invention of calculus. They understood that the velocity of planets changed over time. By averaging the velocity between known points, they could calculate something similar to a wave function that predicted velocity at any point during a planet’s orbit.

All of these theoretical developments took time. There is a clear progression in complexity from the early to late models. Scribes trained for years by copying out procedure texts and taking observations as apprentices to senior scribes (usually their fathers or uncles). Though their models of the sky were wrong, they produced discrete results so accurate that they formed the basis of astronomy up until the Copernican revolution. We should always remember that aspects of science now can be accurate but flawed in their theory (sometimes in undetectable ways). For those looking at the sky night after night, it wasn’t all clear skies and bright stars. A cloudy night or a dust storm would prevent the astronomer from seeing the heavenly bodies they intended to locate.

In these cases, the scribes wrote the Sumerian phrase ‘NU PAP’ in their texts, meaning ‘I did not watch.’ Yet, they still included an observation of the celestial body’s location in the sky. Similarly, they might be copying earlier records of observation and encounter a damaged section of text: by filling in the data based on the theoretical models, they could complete a previously missing observation. Their theoretical knowledge was sophisticated enough that it allowed them to chart the movement of celestial bodies in the absence of any direct sensory evidence. We can contrast this with examples when they ‘did not watch’ the river level. In these cases, they lacked a theoretical model for river level over time; so, if they were not able to see the river bank, there was no observation to report and thus no data to record.

The way we see the world is as much a product of our senses as it is of our culturally mediated ways of understanding what is around us. For the ancient Babylonians, it was the combination of technical knowledge and their sense of sight that created a scientific way of viewing the heavens above. They of course would not have called it ‘science’: for them, it was the practice of ‘ṭupšarrūtu Enūma Anu Enlil’, literally meaning the ‘scribal art of the [textual series] “When [the gods] Anu and Enlil…”’. It was a discipline that covered both the scientific prediction of planetary movement as well as the auspicious meaning behind their appearance at certain locations within the sky.

But just as they watched the sky using highly trained technical skills, they also told stories of the god Marduk creating the world and setting the Moon in its phases. Astronomy, astrology and religion were all ways that ancient Mesopotamians observed and reported on the world around them. While we may see these as separate (and likely invalid) fields of enquiry, it is important to recognise how even modern science can be dependent on cultural perspectives. Observation, whether of the stars above or of liquid in a beaker, is mediated by features of our complex and many-faceted identities.