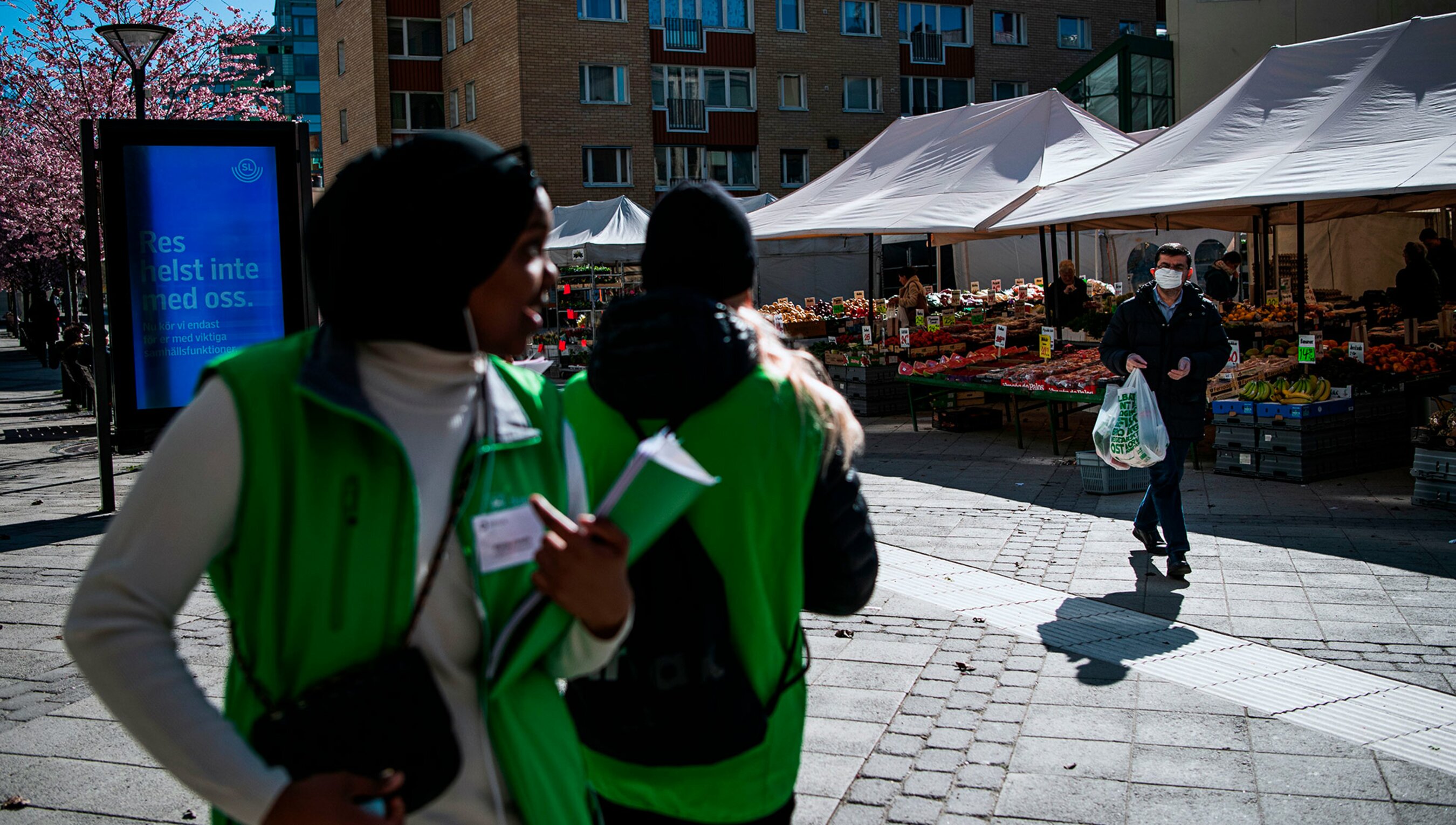 Empathic friends can provide the right kind of peer pressure

is an associate professor of psychology at Umeå University in Sweden and a researcher affiliated with the Institute for Globally Distributed Open Research and Education. She does research on intergroup relations, anti-immigrant attitudes, diversity, empathy, activism, and adolescent development.

is professor of psychology at Örebro University in Sweden. She is a lifespan developmental psychologist focused on the psychological, emotional and social development of adolescents within the contexts of family and friends.

Peer influence in adolescence tends to get a bad rap. We hear plenty about young people bullying each other and friends getting high together or wasting time on social media. Parents are advised to be mindful about peers pressuring their children into risky situations or encouraging deviant attitudes. Adolescents are warned about getting into the wrong crowd. Countless films and novels have highlighted harmful peer dynamics, and scientific papers have been written about how peers facilitate antisocial behaviours and substance use.

This focus on negative peer influence during adolescence is understandable: it is a time when many are especially vulnerable to peer pressure, in part because peers are a more important reference group at this life stage than at others. Adolescents turn increasingly toward their peers; the relations they have with parents can become strained as they seek ways to become more independent. Youth are also still developing cognitive control over their behaviour and emotions, which means that a problematic peer context can be risky and difficult to navigate.

Yet an overly negative view of adolescent peer influence can be misleading – and might cause parents and educators to overlook its potential for promoting healthy development. Adolescents can, for instance, be swayed by their peers to engage in prosocial behaviours, including volunteering. Perhaps you can recall your own examples of certain teen friends encouraging you to help others, whether it was assisting another student with their homework or volunteering together in a soup kitchen. In the past two decades, scientists who study peer influence have taken a more hopeful view of peer relationships as essential for positive development. We now have evidence that friends can also lower the risk of mental health problems and strengthen a sense of identity in youth. The impact of friends can accumulate over time to help build the foundations for wellbeing and relationships in adulthood. Positive peer relations in adolescence are associated with more satisfying romantic relationships and greater effectiveness at work later in life.

The positive impact of many adolescent friendships can be explained in part by how they help young people to develop their interpersonal capacities. Key among these is empathy – the ability to understand another’s mental states, share another’s emotions, and feel concern about others’ welfare. Empathy is a ‘social glue’ that facilitates lasting relationships, good relational communication, and successful conflict management. No wonder research shows empathic individuals are more helpful, kind and cooperative, and less likely to harass others.

For optimal empathy development, it’s not enough to simply have any friends … What seems to matter is having empathic friends

How do friendships facilitate the development of empathy? According to social learning theory, empathic friends serve as role models for adolescents. Repeated interactions with empathic friends provide opportunities for the modelling and observation of empathic concern, turn-taking, and taking others’ perspectives. When one friend responds empathically to another (eg, after the other discloses some worries), that response is felt as supportive, which can strengthen the friendship bond and increase the likelihood of future empathic responding among the friends. In addition, mutual disclosure among friends provides them with the opportunity to learn about others’ thoughts, intentions and emotions, and maintaining friendships over time requires learning to negotiate the needs of all parties.

We recently conducted research that helps to further illuminate how friendship might affect empathy development during adolescence. We analysed questionnaire data from 318 adolescents in Sweden, collected by the researcher Erik Amnå and his team on two occasions, one year apart. Each adolescent reported the names of up to eight friends at school, and if a peer confirmed the friendship, we treated these students as friendship pairs. Members of the friendship pairs also each rated how well certain empathy-related statements described them personally. These prompts covered two forms of empathy: perspective-taking, the ability to adopt the viewpoints of other people (eg, ‘Sometimes I try to understand my friends better by imagining how things would look from their perspective’); and empathic concern (eg, ‘When I see someone being taken advantage of, it feels like I want to protect that person’).

Our results indicate that, for optimal empathy development, it’s not enough to simply have any friends. We found that adolescents who had a lot of friends weren’t necessarily more empathic – that is, they were not more inclined to try to see other people’s points of view, and weren’t more concerned about others than were adolescents with fewer friends. What seems to matter is having empathic friends. Adolescents whose friends rated relatively highly on measures of perspective-taking and empathic concern tended to increase more in their own self-rated empathy over the course of a year, compared with those who had less empathic friends.

Other research that we have conducted shows a similar pattern: having one friend with an immigrant background was associated with increases in adolescents’ empathy and positive attitudes towards immigrants over time. Having a greater number of immigrant friends, however, did not seem to play a role. So, it may be the quality rather than the quantity of friendships that matters most to adolescent empathy development.

The potential for positive peer influence suggested by these studies could be harnessed by school and community leaders who want to facilitate empathy development. Public campaigns such as Students Against Depression in the UK and Vi gillar olika (‘We like different’) in Sweden have already recognised the power of peer modelling to steer adolescents towards prosocial behaviours. While social and emotional learning (SEL) programmes in many schools teach youth to put themselves in others’ shoes and to feel concern about others, schools can still maximise the effectiveness of teaching by using peer influence. This influence could potentially be tapped, for example, by asking class leaders to check with their classmates in order to identify students who should be recognised for their empathic efforts. Involving adolescents who are viewed as leaders or having high status is important, because their influence over peers is likely to be especially strong.

Despite the apparent power that peers have to encourage empathy development, there are processes that might get in the way of such positive effects. We know that adolescents tend to select friends who are similar to them. That means that empathic youth are likely to select relatively empathic friends, while less empathic youth might select friends who are similarly lower in empathy. By befriending low-empathy peers, adolescents who are low in empathy themselves could miss out on the lessons that friendships with empathic peers offer. This may exacerbate the social difficulties of these youth.

What could be done to counteract peer effects that limit empathy development? One idea is that parents, schools and community organisations could pay more attention to peer-group dynamics. For example, schools could seek to promote positive peer relations and to mitigate the marginalisation of youth with social difficulties during SEL classes. They could also avoid grouping together low-empathy or aggressive adolescents, and instead create opportunities for contact and friendships between lower- and higher-empathy youth. Once formed, such friendships might help to increase the empathy of less empathic adolescents. It is unfortunate that SEL classes typically end before students enter high schools; our work on youths’ developing empathy suggests that those in high school could still benefit from them.

Youth today have more opportunity for contact with friends than ever before due to longer schooling and social media. These recent trends have likely made peer relations even more important than they were in the past. Our research shows that this is not strictly a cause for worry: the right peers, it seems, can help young people to focus more on others’ mental states and learn to attend to others’ emotional needs. These kinds of peer processes deserve as much attention as the more concerning ones.