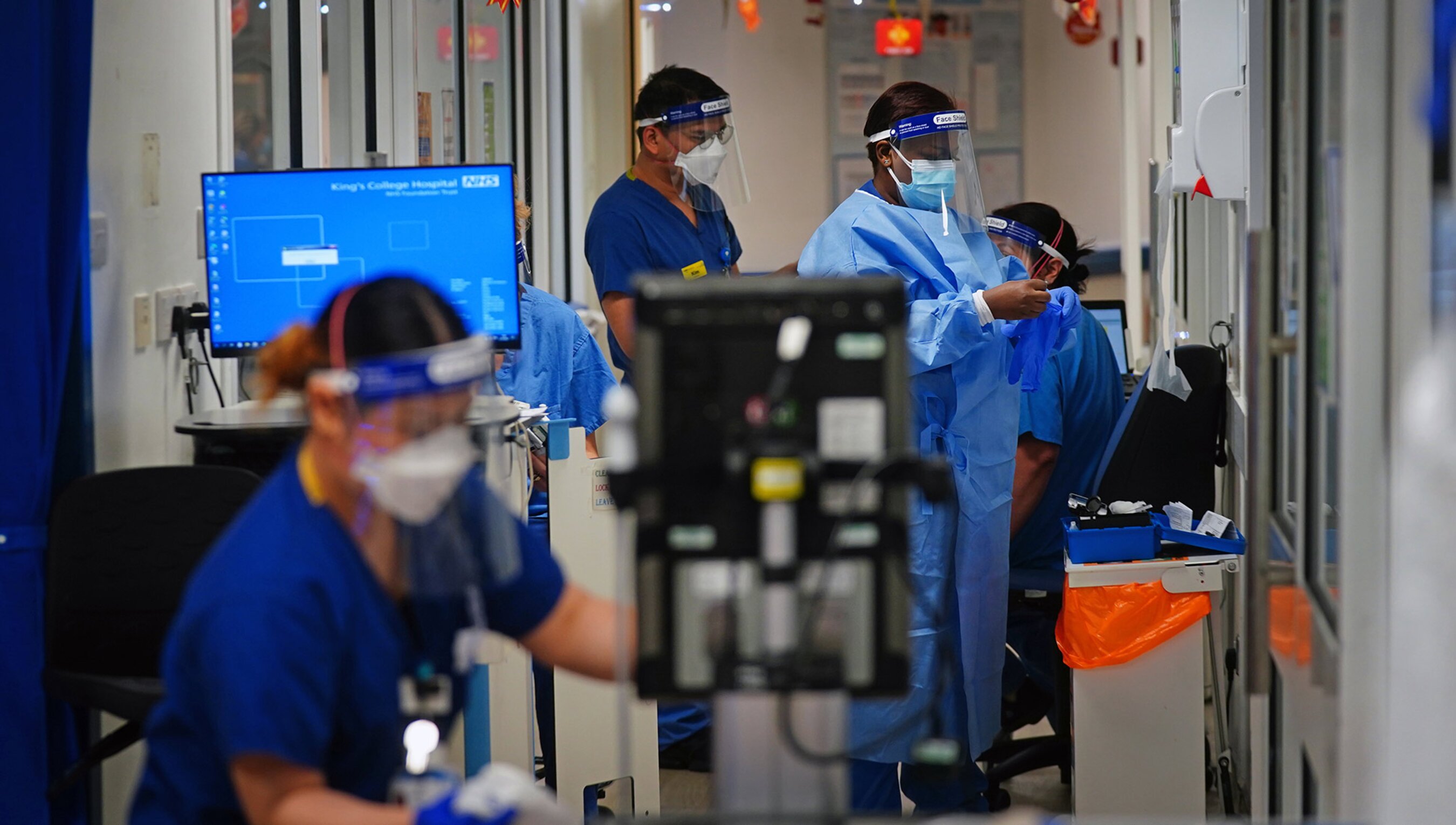 A busy ward at King’s College Hospital in south London during the COVID-19 crisis. Photo by Victoria Jones/PA/Getty

How the noises of a hospital can become a healing soundscape

A busy ward at King’s College Hospital in south London during the COVID-19 crisis. Photo by Victoria Jones/PA/Getty

is associate professor in modern medical history at the University of Bristol. She was awarded a UK Research and Innovation Future Leaders Fellowship for the project Sensing Spaces of Healthcare: Rethinking the NHS Hospital. Her recent book is Making Noise in the Modern Hospital (2021).

It is July 2020. I am at a hospital in Bristol for an appointment. It is busy. I am waiting in a corridor. The doctors are running late. It feels crowded. It feels airless. I am wearing a mask. I struggle to breathe. I am anxious. People walk past me. They are too close. I try to move out of the corridor. I need space, air, quiet. Someone bumps into me. People are talking, talking, talking. The filing cabinet bangs open and shut. A wheelchair squeaks past. Have I missed my appointment? I listen carefully for my name. I can’t hear the sound for the noise.

At the time of this hospital visit, I was writing a book on the history of noise in modern British hospitals. I had visited this hospital many times, but never previously experienced it as stressful or noisy. It might be that the hospital was genuinely noisier or busier than usual, as it tackled a backlog of patients after the first English ‘lockdown,’ but I had also become newly aware of the sounds of the hospital. During the pandemic, these sounds became noise to me for the first time, because I was overwhelmed and conscious of the inability to remove myself from other people. This personal experience confirmed my professional view: that definitions and measurements of noise differ across time and place, including – potentially – for the same person.

Hospitals produce a lot of sound. These sounds vary, wax and wane depending on the time of day, where you are in the hospital, and what you are doing. That said, hospitals are typically busy, sound-producing, 24-hour environments of work and care. This hospital cacophony has often been labelled as ‘noise’ by those trying to rest or focus. However, noise is defined differently by the many people who spend time in hospitals. It is important to understand how, when and why sounds become noise. By thinking about sound and noise in a hospital setting, we can understand modern ‘noise problems’ more generally.

The label of ‘noise’ is attached to sounds for a wide range of reasons that go beyond loudness. A quiet sound can become noisy over time, sometimes bothering only one person who is frustrated that nobody else can hear it: a ticking clock, for example, or the rattling of an air conditioner. Loud sounds can be tuned out through familiarity. ‘Alarm fatigue’ is often experienced by staff members working in high-technology environments.

Noise is highly personal, and few sounds are inherently or only noisy. To quote my colleague at the University of Bristol, the environmental historian Peter Coates: ‘Noise is to sound what stench is to smell (and what weed is to plant) – something dissonant, unwanted, out of place, and invasive.’ Different people might not agree on which sounds are ‘invasive’ and ‘unwanted’. Hospital sounds are meaningful to staff, patients and visitors in specific ways. Sounds can further be experienced differently – or turned into noise – for the same person in certain emotional states such as anxiety and boredom.

Definitions of noise are also social and cultural, meaning that they differ across time and place. In Making Noise in the Modern Hospital (2021), I examined changes to the soundscape of modern British hospitals to argue that hospitals have long been described as noisy, but the nature and identity of that noise has evolved.

In the years of the National Health Service, founded in 1948, there have been significant architectural developments that have changed how hospitals sound, including the shape of hospitals and the materials with which they are built. There are more effective sound-proofing materials and double glazing, but new sounds have been introduced as part of environmental controls. New building materials have solved some acoustic problems, while creating new ones: as the architectural historian David Theodore has written, modern hospital architecture ‘simultaneously produces unwanted sounds and tries to mitigate them’.

The hospital hubbub has changed for a wide range of reasons beyond the built environment. There are more patients passing through hospitals, while visiting hours have extended. There are new technologies, including alarms, and new types of high-technology medical specialisms such as intensive care. There has been a rise of entertainment and communication technologies, followed by a shift to more personal forms of listening; the 1980s, for example, brought peak popularity for pagers and the Walkman. Traffic has increased, particularly outside urban hospitals.

The 20th century brought new ways of measuring sound, and new quantitative definitions of noise. In the early 20th century, meters allowed sound to be quantified for the first time, providing apparently objective ways to identify noises as a problem of loudness. Noise meters were used to identify problem spaces in hospitals, which were often tackled with noise-abatement measures. This strategy was commonly used by architects and engineers, who treated noise as a material problem to be dealt with by material means.

In the postwar period, there was growing interest in patients’ experiences of hospitals and in the use of surveys to gather qualitative data. Organisations such as the King’s Fund charity circulated questionnaires on hospital noise. In responses to these surveys, ‘noise’ often referred to the sounds of ‘inconsiderate’ people – a concept shaped by their gender, ethnicity and age – or ‘unnecessary’ sounds. The King’s Fund commissioned the cartoonist Fougasse (best known for his wartime work ‘Careless Talk Costs Lives’) to make a series of posters to combat hospital noise, which explicitly acknowledged these factors. The example below responded to survey complaints about nurses, and emphasised that ‘the nuisance value of sound often bears little relation to its intensity’.

If the sounds of hospitals are heard not as a cacophony, but as a mingling of purposeful and important sounds, could they be less distressing?

Sound design and noise abatement blur in patient-centred acoustic design, which means eliminating unpleasant sounds and introducing new ones to replace them. Background music has been used in hospitals since the 1960s to try to ‘humanise’ certain spaces such as waiting rooms. However, musical taste is notoriously personal and there have even been campaigns against background music because of the distress it can cause to Autistic people and people with hearing aids. Some hospitals have turned instead to ‘soothing’ sounds, including natural sounds, such as birdsong, that attempt an acoustic counterbalance to ‘high technology’ environments. Of course, this too will be experienced as noise by some.

Others have tried to tackle the diversity of sensory experience and perception, recognising that one person’s ‘soothing’ is another person’s noise, and one person’s ‘peace’ is another’s ‘isolation’. Yoko K Sen, for example, has recently brought a musician’s perspective to the problem, and is experimenting with sound designs that individuals can create for themselves. All of these efforts seek to improve the hospital soundscape. The goal of hospital noise abatement has never been to eliminate sound completely. Itself a socially constructed idea, silence in the hospital has long been thought of as eerie and deathly.

Hospital noise is not a problem that can be entirely resolved. One reason is that noise is not a fixed problem; its meanings are personally and historically contingent. Another reason is that new sounds constantly replace old ones. Hospitals are also busy spaces of work and care, as well as high-technology environments in which some sounds can never be removed. They are highly emotional spaces, in which even relatively quiet sounds can cause significant anxiety or stress.

Rather than trying only to eliminate noise, we might also try to listen to it more closely: what sounds are perceived as noise and why? If the sounds of hospitals are heard not as a cacophony, but as a mingling of purposeful and important sounds, could they be less distressing?

I have worked with Reuben + Jamie, a Bristol-based creative filmmaking team, to explore some of these questions. The video These Sounds Save Lives (below) shows the navigation of a 3D virtual reality hospital from the perspective of a patient. The hospital’s visual elements are stripped back to focus on its soundscape. This video starts with indistinguishable hospital noise, before breaking it down to individual sounds and showing how each can be reframed as part of treatment, care and recovery.

None of this is to deny that hospitals can be genuinely loud and stressful environments. I know from personal experience that it is difficult to relax, rest or recuperate in the context of sensory overload. I do, though, think that it is useful to recognise noise as an individual and social phenomenon as well as an acoustic one. Pinpointing what feels out of place and invasive to each of us, and why, might be a valuable step towards turning noise back into sound.

The body and physical healthMusicTechnology
8 February 2022