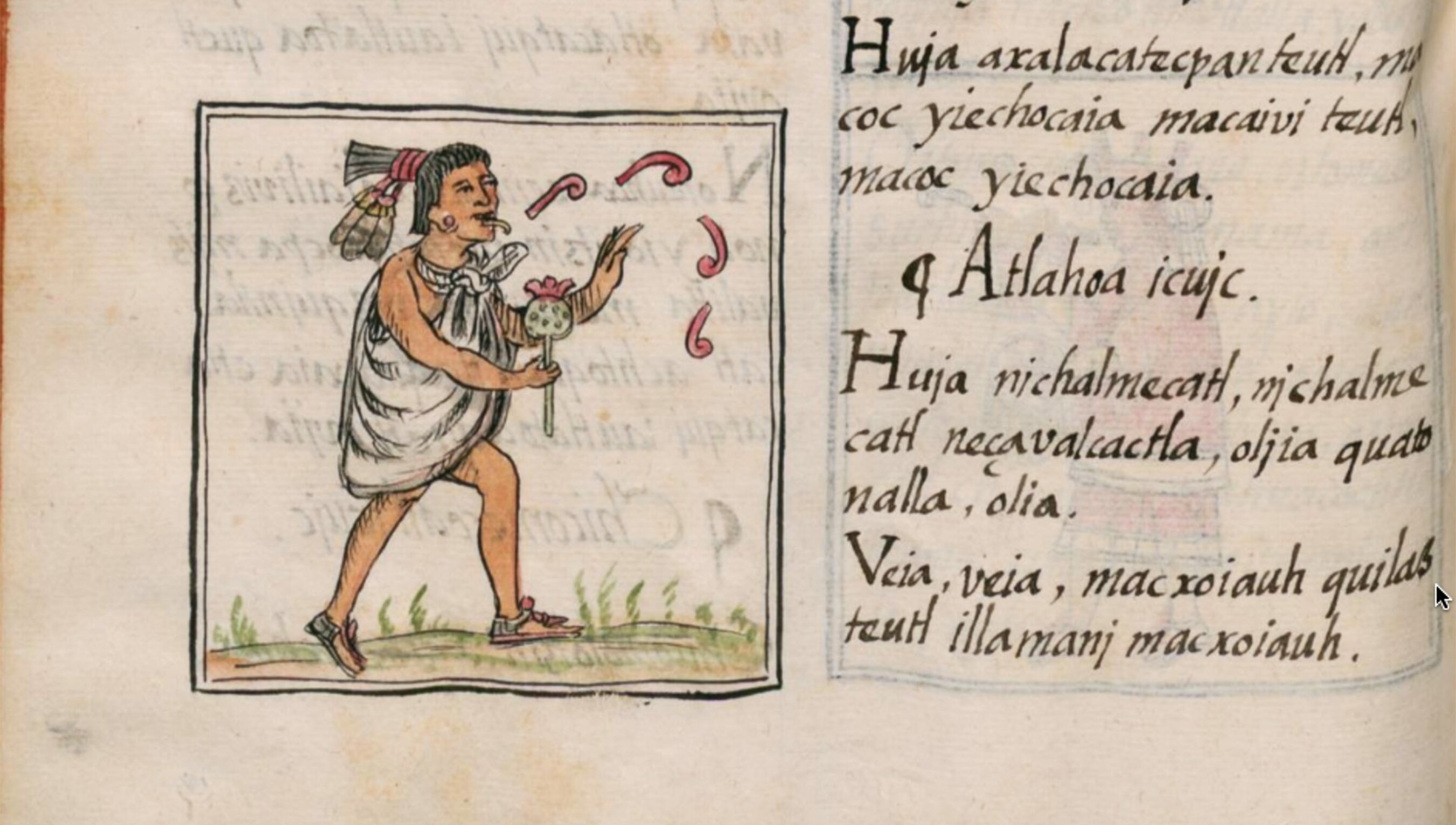 A Nahua man from the Florentine Codex. The speech scrolls indicate speech or song. Courtesy of the Biblioteca Medicea Laurenziana, Florence

Learning Nahuatl, the flower song, and the poetics of life

A Nahua man from the Florentine Codex. The speech scrolls indicate speech or song. Courtesy of the Biblioteca Medicea Laurenziana, Florence

is an author and associate professor at the University of Texas Rio Grande Valley. He is the author of Flower, Song, Dance: Aztec and Mayan Poetry (2013), The Smoking Mirror (2015) and They Call Me Güero (2018), among others. He lives in South Texas.

Nahuatl is what we call a group of two dozen interrelated languages spoken mostly in central Mexico for the past 1,500 years and by 1.5 million ethnic Nahua people today. The lingua franca of the Aztec Empire, Nahuatl was decreed the official language of the Spanish colonies in 1570, and was used as the language of missionary work in indigenous communities. Scholarship arose around the language. Catholic Nahua elites proudly spoke their native tongue, using it to record ancestral histories. Then, in 1696, King Charles II decreed Spanish to be the one and only official language. Nahuatl survived, but in remote communities or in the hushed conversations of working-class urban Nahuas.

A century later, when my ancestors began to make their way out of northern Mexico into South Texas, the once majestic language of kings had been deprecated, called a ‘dialect’, as if, once unmoored from political power, it had lost linguistic merit as well. By the time my grandfather Manuel Garza was born, his family’s indigenous past had been wiped away. They were Spanish-speaking Mexicans, then Mexican-American Texans, heirs to traditions from across the sea.

It wasn’t until I took an anthropology class in college that I even heard of Nahuatl. I was surprised to learn that words I used all the time – tomato, avocado, shack, plus dozens more in Spanish – were derived from that native tongue. My family also knew nothing of the Nahuas and their culture, despite the traces in our palimpsest, mestizo souls.

At first, I was shocked and a bit angry. Yet whom could I blame for five centuries of syncretism and erasure? Rather than lash out in response to the loss I felt, I began to scour the local libraries for books about pre-Colombian Mexico. Over time, I decided it was my responsibility to reconnect with our forgotten past.

Hearing Nahuatl for the first time, I was surprised by its soft, melodic rhythms. It eschews voiced consonants (no b, d, g, th, j), and its four vowels are almost whispered when short. Aside from a trio of sounds that are tough on speakers of Indo-European languages (tl, postvocalic kw, intersyllabic glottal stop), it isn’t all that hard to pronounce. The mouth lovingly adopts expressions such as xochicuicatl (roughly ‘show-chee-QUEE-kaht’), ‘poetry’; necuepaliztli (neh-quay-pah-LEAST-lee), ‘transformation’; or yolnonotza (yohl-no-NOTE-sah), ‘to speak with one’s own heart’.

Across five centuries they came, sombre or laughing, majestic and mundane, enduringly human

The variant of Nahuatl in use at the time of the Spanish conquest was called Nahuatlahtolli or ‘clear speech’, a well-deserved title. Though it strikes the uninitiated as extremely difficult, in reality it is an elegant language with a straightforward set of grammatical rules and very few irregularities. Once you get used to the longer, agglutinated words, you find yourself constructing novel phrases with ease, aided by the omnipresent particle in, which can be an article, a relative pronoun, a quasi-preposition, etc.

Ca paqui in iyoliya in oquichtli in tlamati. Content is the heart of the man who knows.

Not that there are many who will speak Classical Nahuatl with you, of course. Imagine a modern Japanese person studying Elizabethan English. They might need it for appreciating or translating William Shakespeare, but a conversation with random strangers in the United States is out of the question.

Still, as cold as this affirmation might sound, I wasn’t learning Nahuatl to speak with modern Nahuas. Not yet. First, I needed to listen to our common ancestors, to read the words they’d bent the Roman alphabet to record.

How to explain the feeling of deciphering those first texts, of pushing past prosaic translations to hear those raspy, ancient voices first-hand? Even now I’m overwhelmed. Across five centuries they came, sombre or laughing, majestic and mundane, enduringly human. The sacred stories and histories of the Aztecs began to gather in my heart, and I perceived in their frayed edges the larger weft to which they belonged, a tapestry in which I too was a thread. Every distorted take on their culture faded away as I let them tell me themselves who they had been.

Along the way, I learned who I could be as well.

After a few years, I tried my hand at translating their cuicatl or songs, wanting to share in English verse the transcendent value of their art. That work resulted in the publication of an awardwinning collection Flower, Song, Dance: Aztec and Mayan Poetry (2013).

Given what this experience meant, how I felt healed after decades of exploration, I wanted to share the tapestry I saw with other Mexican Americans, sitting down before my community, convoking them to join with me in this remembering of voices and story. And it felt important that others should learn Nahuatl as well.

Why? Primarily to better appreciate the often-erased and often terrible beauty of Mesoamerica and her many children in Mexico and the US. But also because we become better people through the study of this language and the enduring understandings about life it was used to encode.

So I began to teach the clear speech, at the university where I work, and online as well.

My immediate, personal experience of learning Nahuatl was one of therapeia, a reintegration of my culturally inherited identity that the philosopher Gloria Anzaldúa called the Coyolxauhqui Process, after the goddess of the moon who was dismembered by her brother the sun god Huitzilopochtli. Aztec thought recognised a need to gather the broken bits of oneself and rebuild, discarding those elements that hamper enlightenment and happiness. It’s a self-directed therapy that echoes in the sacred tale of our creation: Quetzalcoatl stole the broken bones of previous failed attempts at humanity from the Underworld; the Divine Mother ground them to bone meal, blended them with the blood of the gods, and fashioned people.

Even without Nahuatl, we can understand this insight that everything must be broken to be made truly whole. But reading the texts in the clear speech shapes our thoughts in a Sapir-Whorfian blossoming of semantic categories. And frankly, learning a language so unlike English helps to shatter us precisely in the ways needed for fruitful spiritual bricolage.

The arc of my life had taken me through varieties of Christianity to a sort of pan-gnostic spirituality, then from disgruntled agnosticism to broadly humanistic atheism. None of it satisfied. None of it gave me the right tools for good living.

Imagine my surprise when, embedded in the fragmented Nahua literature that survived conquest and conversion, a philosophy emerged that resonated with me as nothing else had. Consider the Aztec sacred story of the Five Suns – in which gods struggle to remake the world again and again, each attempt better than the previous. The lesson: humans exist in nepantla, a liminal space between creation and destruction, order and chaos. Rather than trying to eliminate sin from my life – trying to emulate some insipid, inhuman perfection – I could discover peace only in balancing those two complementary halves of my soul.

Rediscovering the unadulterated indigenous myths of Mexico can help both Mexicans and Mexican Americans clarify their sense of self, of belonging to something greater, of being the latest in a long line of heroic and noble souls that have sought to balance chaos and order in North America for millennia. Psychological healing and health arise from such a perspective.

But using Classical Nahuatl as a way to harness the Coyolxauhqui Process and find spiritual equilibrium in the midst of nepantla? That is Tlacayotl, the Way of Humanity. A gift bequeathed by the ancients to all of us, their biological and spiritual children alike.

PoetryEthnicity and cultureStories and literature
16 June 2020