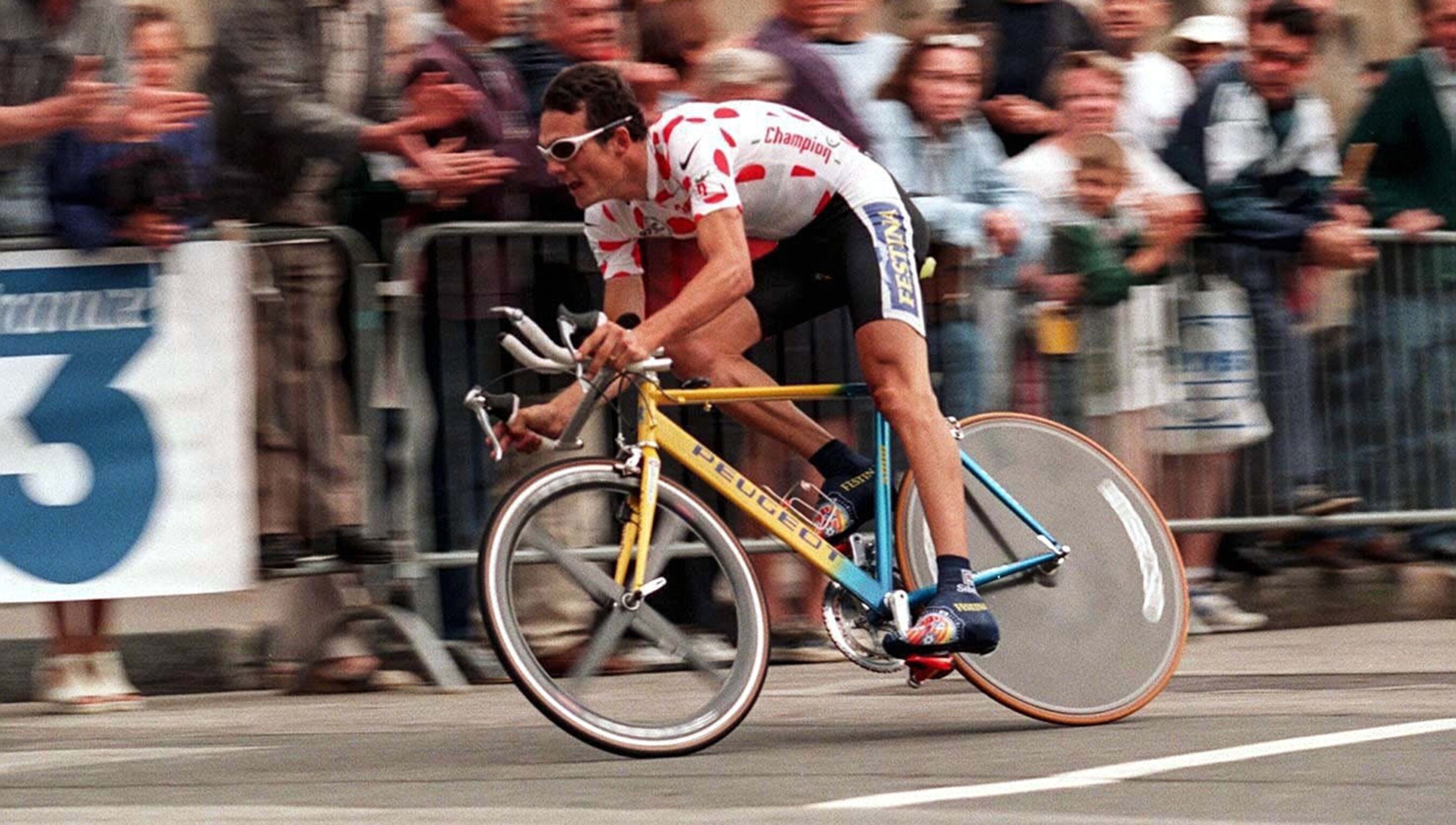 Richard Virenque during the time trial stage in the 1997 Tour de France in Saint-Étienne. Photo by Bongarts/Getty

Richard Virenque during the time trial stage in the 1997 Tour de France in Saint-Étienne. Photo by Bongarts/Getty

is a science writer. He is the author of The Expectation Effect: How Your Mindset Can Transform Your Life (2022) and The Intelligence Trap: Why Smart People Do Stupid Things and How to Make Wiser Decisions (2019). He lives in London.

It is 18 July 1997, at stage 12 of the Tour de France, and Richard Virenque, of the French team Festina, is preparing for the 55-km individual time trial in Saint-Étienne. These trials aren’t his specialism and, having heard of a new drug that will supposedly deliver him a spurt of energy, he asks his physiotherapist, Willy Voet, to procure the ‘magic potion’.

Voet is soon in possession of a small jar of a mysterious white liquid, which he is told to inject into Virenque’s buttocks before the event. On race day, Voet faithfully delivers an injection – and the results are breathtaking. Virenque goes head-to-head with his great rival Jan Ullrich for much of the race. Although the German eventually wins, Virenque is only 3 minutes and 4 seconds behind him – a much better result that day than he could have imagined. ‘God I felt good!’ he later told Voet. ‘That stuff’s just amazing.’

Little did Virenque know that there was no active ingredient in the magic potion. Before delivering the injection, Voet – who feared trying a new substance mid-tournament – had swapped the mysterious white substance for a glucose solution. ‘There is no substitute for self-belief,’ the physiotherapist would later write in his autobiography, Breaking the Chain (2001).

Voet’s observations are hardly unique among athletes and their coaches – but over the past couple of decades, scientists too have become increasingly interested in the potential of ‘mind over muscle’. Their findings suggest that there is far more to it than a motivational mantra. A new picture is emerging of the way that the brain manages the body’s resources and how this can be swayed by our motivation, and by our broader beliefs about our capabilities and the task ahead. As I explain in my book The Expectation Effect (2022), not only can these new insights make sense of Virenque’s experience and others like it, they also offer enticing strategies that we can all use to boost our performance and improve our experience of exercise – whatever our current level of fitness.

To understand the significance of these developments, it helps to return to earlier theories of physical effort and fatigue. For much of the 21st century, biologists in this field had focused on the biochemical changes within the body. According to the prevailing theory, our muscles tire when they run out of the molecule glycogen, and with the build-up of toxic byproducts such as lactic acid that make it harder for the fibres to contract. (Since lactic acid is also a product of fermentation, your muscles are essentially being ‘pickled’, according to this theory.) This should be especially problematic with prolonged or intense exercise, if the heart struggles to pump enough fuel and oxygen around the body to replenish the supplies and convert the lactic acid back to glycogen.

If the brain senses that we risk overexerting ourselves, it will create a subjective feeling of fatigue that deters us from further exercise

Other factors – such as dehydration and body temperature – were also thought to play a role in setting our physical limits but, crucially, the mind was thought to be much less important than the ‘peripheral fatigue’ in the body. Athletes could try all they wanted to pace themselves to avoid using up all their energy too soon but, if they pushed too hard, they were going to ‘hit the wall’ and, regardless of their mental determination, they could do little to diminish their exhaustion.

Yet a series of puzzling findings over the past two decades suggests that it cannot be so simple. For instance, in one study, researchers used electrodes attached to subjects’ arms and legs to show that only 35-60 per cent of muscle fibres appear to be operating during prolonged or intense exercise. If biochemical changes in muscle fibres were the sole cause of physical fatigue, you’d expect many more of the fibres to have been recruited to share the burden before we reach exhaustion. But that doesn’t seem to be what happens.

Then there’s the observation that mental activities can lead to greater physical fatigue. In 2009, researchers at Bangor University in Wales found that cyclists experienced a 15 per cent reduction in physical stamina after they had performed a gruelling 90-minute test designed to tax their memory and concentration. That is hard to explain if exhaustion is simply the result of depleted glycogen and accumulated lactic acid.

For all these reasons, many sports scientists are now coming around to the idea that the brain drives feelings of exhaustion based on many different factors. There seems little doubt that the conventional view was partly correct and that the brain is constantly taking note of physical changes using sensors throughout the body. But, importantly, it will then combine that information with memories of previous experiences, current mood, social feedback – and its estimates of the challenges to come. Based on these calculations, it will determine how many muscle fibres to recruit and the intensity of the movements that the body can sustain. If the brain senses that we risk overexerting ourselves, it will create a subjective feeling of fatigue that deters us from further exercise.

Importantly, the brain’s predictions need to be flexible and sensitive to context, meaning that it is possible to release some of those hidden reserves with small psychological nudges.

Performance-enhancing placebos might work through this precise mechanism. Caffeine, for instance, has long been considered a muscular stimulant that can enhance performance in many sports – yet that is largely a product of our expectations about what it can do. In one study, student weightlifters were given a shot of a bitter-tasting liquid, which they were led to believe contained a high concentration of caffeine. In reality, it was a dose of decaf – but they still managed to increase the number of extensions by around 10 per cent of their previous limit.

The performance boost was even more striking when the researchers applied a procedure known as pre-conditioning. In this experiment, the first of four weight-lifting trials provided a baseline measurement. In the second and third trials, the researchers surreptitiously reduced the weights being lifted after they had administered the placebo caffeine, which was meant to reinforce the weightlifters’ expectations that the caffeine could reduce their fatigue and increase their strength. In the final trial, the weightlifters again received the placebo but now the weights had been restored to their original value. Astonishingly, the weightlifters’ enhanced expectations increased their performance by around 25 per cent, compared with their baseline.

The cyclists improved their performance, even though they knew that the tablets were chemically inert

Altered expectations may even explain the benefits of certain banned drugs, including anabolic steroids and erythropoietin, a hormone that stimulates the production of red blood cells. In a three-kilometre race, runners taking an inert saline injection ran 1.5 per cent faster than a previous personal best if they believed that they had taken a substance similar to erythropoietin. That might sound like a slim advantage, but it could easily give them the edge in a close race, given that Olympic rankings often depend on a fraction-of-a-second difference in race times.

You may wonder how we can put these findings to practical use, without the kind of deception that Voet used on Virenque. One important consideration is that trickery probably isn’t necessary. According to multiple studies, people can benefit from so-called open-label placebos, even though they know they are taking an inert substance. For instance, sports scientists in São Paolo in Brazil recently asked cyclists to perform two one-kilometre time trials – once as a baseline, and once having received two red-and-white capsules containing flour. The cyclists improved their performance, even though they knew that the tablets were chemically inert. Interviews suggest that some of the participants attempted to enhance the effects with techniques such as positive visualisation. As one participant put it: ‘I remembered the tablets that I had taken, I saw the colour and the shape of them in my head and imagined that they were making me more “powerful”.’

If you would like to try an open-label placebo yourself, many sugar pills are commercially available online. If that sounds too artificial, you could try to incorporate other rituals around your fitness regime that can boost your expectations of high performance. If I take an energy drink, for instance, I try to imagine all the nutrients fuelling my muscles – an exercise that may maximise any placebo response to the beverage.

More generally, understanding the power of mind-over-muscle might lead us to reconsider some of our core underlying beliefs about our fitness. For manifold reasons, we might assume that we simply aren’t cut out for exercise. We may have had poor experiences of gym classes at school, for example, and our feelings of inadequacy could then be exacerbated as we compare ourselves with the stronger and faster gym bunnies around us. The scientific research shows that negative beliefs about our capacity for exercise can reduce our endurance and increase our discomfort. This will naturally make it much harder to summon the will to work out in the future.

Without fooling ourselves into thinking that we are ready-made Olympic athletes, we can try to question those beliefs – reminding ourselves, for instance, that everyone is capable of making some slow and steady improvements. We can also look out for ‘catastrophic thinking’ while we go about the exercise, and try to interpret feelings of exertion more objectively. If you have a dim view of your fitness, you might currently interpret the natural aches and pains and feelings of fatigue as a sign of your own ineptitude. This could then trigger feelings of shame – ‘I’m so hopeless’ – and the assumption that you’ll never improve. In reality, of course, your slight discomfort is more likely a sign that you are building strength and endurance – and recognising that fact could help you to reduce some of the negative feelings of fatigue.

My own experiences are purely anecdotal, but since researching The Expectation Effect I’ve reframed my assumptions about my own fitness. Sadly, I can’t say that this has transformed me, at 36, into a world-class athlete, but it has transformed my experience of exercise – which was, after all, my only goal. I once dreaded my twice-weekly trips to the gym. But I now have greater endurance on the treadmill and rowing machines, and I lift heavier weights. Most importantly, I find the whole process less exhausting and more enjoyable, so that I will happily work out every day – and my mood is much better for it.

The advances in exercise science suggest Voet was right: there really is no substitute for self-belief.