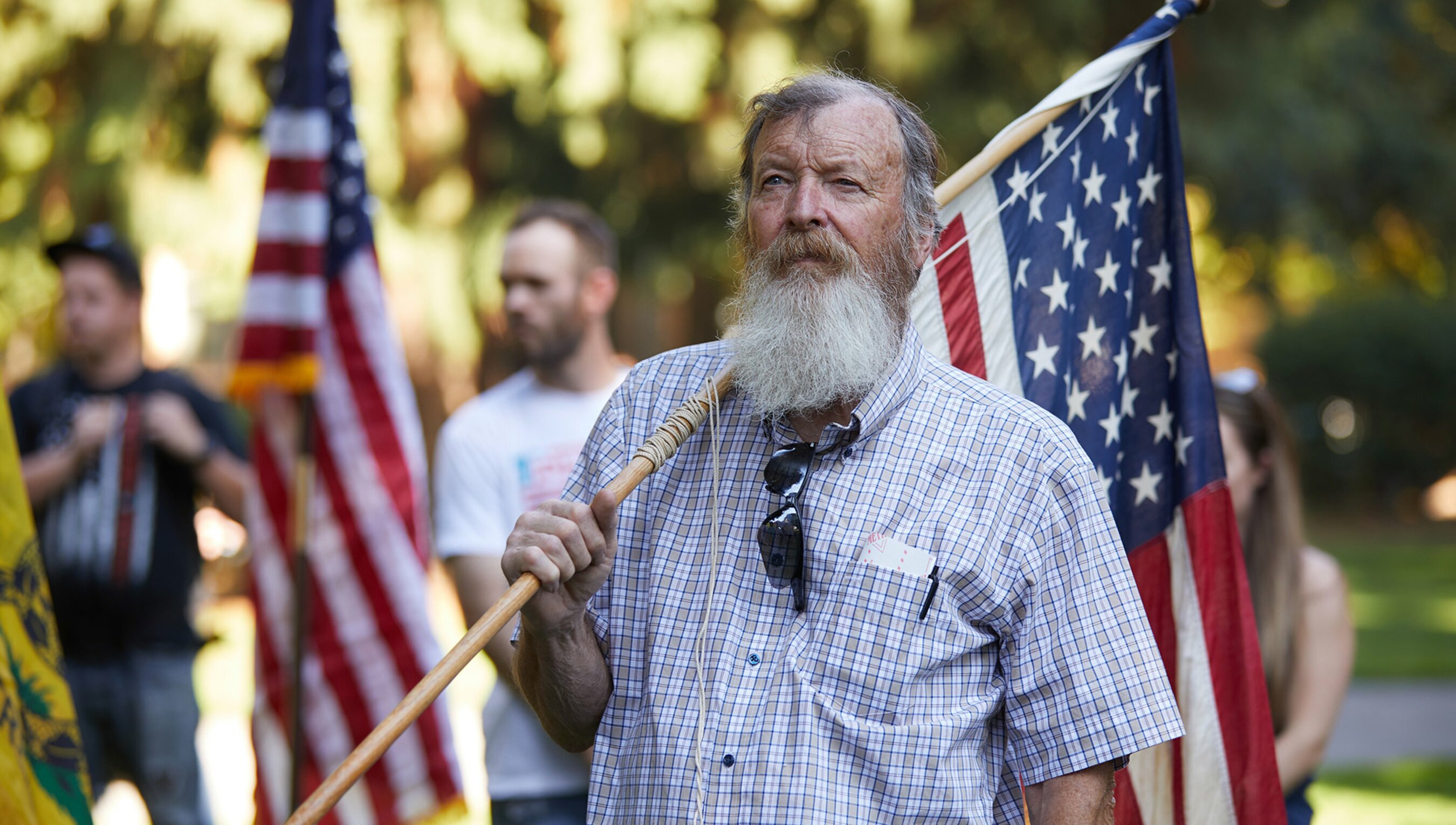 Popper was right about the link between certainty and extremism

is a postdoctoral fellow at the Massachusetts Institute of Technology Sloan School of Management. He studies the psychology of politics, focusing on ideology, authoritarianism and radicalism.

is a doctoral candidate in Emory University’s clinical psychology programme. She studies intellectual humility and its potential implications for belief polarisation and misinformation susceptibility.

Political views are, fundamentally, opinions about the best ordering of society. To paint with the broadest of brushes, progressives are optimists, seeking to plant trees whose shade they may never stand under. Conservatives, by contrast, believe that moving too quickly risks breaking the fragile machinery of society – perhaps irrevocably so. In our view, both of these philosophical positions are logically coherent and, depending on one’s core values, defensible. We hope that this statement registers to most readers as uncontroversial. After all, most progressives can see that some risk accompanies any new, ambitious societal venture, while most conservatives can see that stagnation looms close behind excessive caution.

Regrettably, it is now apparent that reasonable, intellectually charitable discussions between progressives and conservatives are quite scarce in many places – leaving little room for compromise or legislative success. Many people hate those who disagree with them, perhaps seeing no possible route to the other side’s political conclusions other than moral aberrance or callous self-interest. Accompanying this vitriol and anomie, it would seem, is a widespread lack of scepticism toward one’s own political beliefs. Some people are not just confident, but absolutely, 100 per cent certain that their views about how to order society are optimal. For these people, extremism and animosity might seem to be the only logical route. The philosopher of science Karl Popper went so far as to argue that absolute certainty is the foundational component of totalitarianism: if one is sure that one’s political philosophy will lead to the best possible future for humankind, all manner of terrible acts become justifiable in service of the greater good.

We took inspiration from this line of thinking in a recent study of nearly 3,000 people across the United States. As political psychologists, our interests lie in mapping the ‘political mind’ – understanding the ways in which people think and feel about politics, what they want from politics, and how these cognitive, affective and motivational processes shape their behaviour. To get at the nexus between certainty and politics, we asked people a simple question: ‘On a scale of 0 per cent to 100 per cent, how certain are you that your political beliefs are correct?’

Belief superiority can lead politically extreme people (on both the Right and Left) to be more intolerant, prejudiced and inflexible towards those who disagree with them

We found that 12 per cent of our sample reported being absolutely (100 per cent) certain about their political beliefs on this zero-to-100 scale. Who are these people who say they are absolutely certain? There were not substantial differences in certainty between liberals and conservatives overall, but there was a notable difference between people at the fringes of the political spectrum and everyone else. Absolute certainty was endorsed by 91 of 290 (or 31.4 per cent of) individuals who self-identified as ‘extremely Left-wing’ and by 54 of 133 (40.6 per cent of) individuals who self-identified as ‘extremely Right-wing’. By contrast, only 6.8 per cent of all the other participants reported being absolutely certain – which included participants with only slightly less polarised views (ie, self-identifying as ‘very Left-wing’ or ‘very Right-wing’).

People who identified as politically extreme here are not necessarily members of radical groups that regularly engage in political violence. They are extreme in a relative sense, as compared with norms in the US. Still, these respondents were about five times more likely than others to claim to be absolutely certain about their political views. Extremism and absolute certainty seem to resonate.

Technically speaking, one cannot (rationally) be absolutely certain that the Sun will rise tomorrow – just more than 99.9 per cent certain. Indeed, from a mathematical perspective, being absolutely certain implies that one will not update one’s beliefs whatsoever, even when shown evidence that challenges those beliefs. We can’t be sure that our participants had thought through the rational implications of their absolutism. But the possibility that these people would refuse to change their beliefs under any circumstances generally aligns with a suite of evidence linking ideological extremism to the degree to which people view their political attitudes as superior to others’ attitudes. This belief superiority can lead politically extreme people (on both the Right and Left) to be more intolerant, prejudiced and inflexible towards those who disagree with them.

One popular theory suggests that extremist ideologies – whether on the Left or Right end of the political spectrum – appeal to thinkers who tend to conceptualise the world in unambiguous, black-and-white terms. Indeed, growing evidence shows that ideological extremism is associated with low cognitive flexibility, meaning the ability to adapt to new, shifting or unexpected events and perspectives. What this suggests is that political extremism is related to the cognitive architecture of our brains.

Yet, another popular theory, known as the rigidity-of-the-Right hypothesis, argues that individuals who think of the world as uncontrollable and difficult to understand have a motivational need to adopt political ideologies that foster a sense of order and predictability. Because conservatism offers a sense of certainty by way of its support for current social norms and hierarchies, the theory suggests, Rightists are disproportionately more likely to be cognitively, ideologically and motivationally rigid.

We tested both of these possibilities with our data. The fact that both the ‘extremely Left-wing’ and ‘extremely Right-wing’ expressed absolute certainty about their political views at similar rates supports a link between extreme ideology in general and a black-and-white view of the world. But some of what we found was consistent with the rigidity-of-the-Right hypothesis. For one, when we assessed a characteristic known as dogmatism via a 20-item measure of unjustified belief certainty regarding ‘big’ or ‘important’ issues (eg, ‘I am so sure I am right about the important things in life, there is no evidence that could convince me otherwise’), we found that people identifying as ‘extremely Right-wing’ were far and away the most dogmatic group in the study.

One plausible interpretation of our findings is that extremely Left-wing and Right-wing people are similarly dogmatic about their political beliefs, specifically, but that extreme conservatives are uniquely dogmatic about certain ‘big’ topics such as religion. We took this to mean that both hypotheses – the rigidity-of-the-Right and ideological extremism hypotheses – are partially correct.

But there was an additional layer of complexity that emerged from people’s self-descriptions of their political identities. Given that many people identify as ‘socially liberal and economically conservative’ (or vice versa), we also distinguished between participants based on how Left- or Right-wing they said they were on social issues and, separately, on economic issues. Social conservatism, for instance, typically refers to a cluster of beliefs rooted in preferences for traditional values, social order and strict norm-enforcement – and, in contemporary Western democracies, it predicts stances on same-sex marriage, religion, law and order, and national security. In the same countries, economic conservatism – rooted in preferences for competition and economic self-interest – predicts stances on taxes, the social safety net, business regulations, unions, and debt forgiveness.

A growing body of evidence shows that the psychological causes and correlates of social and economic ideology differ – and sometimes quite dramatically so. For instance, many studies show reliable correlations between social conservatism and cognitive rigidity, yet relations between economic conservatism and rigidity indicators tend to be null or negative. In fact, related work has shown that, around the globe, it is actually slightly more common for Left-wing economic preferences to be correlated with social conservatism than with social liberalism, which we would not expect to occur if ‘conservatism’ and ‘liberalism’ were wholly psychologically coherent categories. To uncover the joints of the political mind, it can be useful to move beyond the distinction between ‘conservative’ or ‘liberal’.

Consistent with this line of thinking, in our work on absolute certainty and dogmatism, individuals who were far-Left only in their economic views were higher on the measure of dogmatism than those with far-Left social (but not economic) views, whereas those with far-Right economic views were lower on dogmatism than those with far-Right social views (this pattern was mirrored, in a less pronounced manner, for absolute certainty). The dynamic posited by the ideological extremism model (ie, extremists in general are more certain and dogmatic) was approximated in the economic domain – such that people with far-Left economic views were no more dogmatic than people with far-Right economic views. Yet, in the social domain, the Right extreme was clearly more dogmatic than the Left – thereby supporting the rigidity-of-the-Right model. Indeed, social conservatism was especially associated with dogmatism, suggesting that something about social conservatism, specifically, may be congenial to unjustified certainty and intolerance.

These findings underscore the possibility that social conservatism and economic Leftism share certain structural and psychological features. After all, both extreme social conservatives and extreme economic Leftists seek to impose top-down constraints on personal freedoms to safeguard collective societal wellbeing. By the same token, social liberals and economic conservatives might share some psychological roots – and perhaps even common political ground.

It is important to remember that we are describing broad, group-level trends; on an individual level, the relations between ideology and certainty will vary considerably. Nevertheless, exploring the cognitive correlates and potential causes of political ideology provides an important insight: how we hold our beliefs is relevant to what we believe. Could learning to allow for the possibility that one is wrong be a simple defence against unexamined extremism? Although that idea is speculative, research suggests that a healthy dose of intellectual humility helps to protect against polarisation and bias.

Of course, we do not begrudge people who have subjected their beliefs to rigorous scepticism and ultimately concluded that extreme measures are the preferable option for society. These people have a valuable perspective. What we do warn against is people who are sure that theirs is the only solution to societal problems. There, we agree with Popper: absolute certainty is something to avoid.