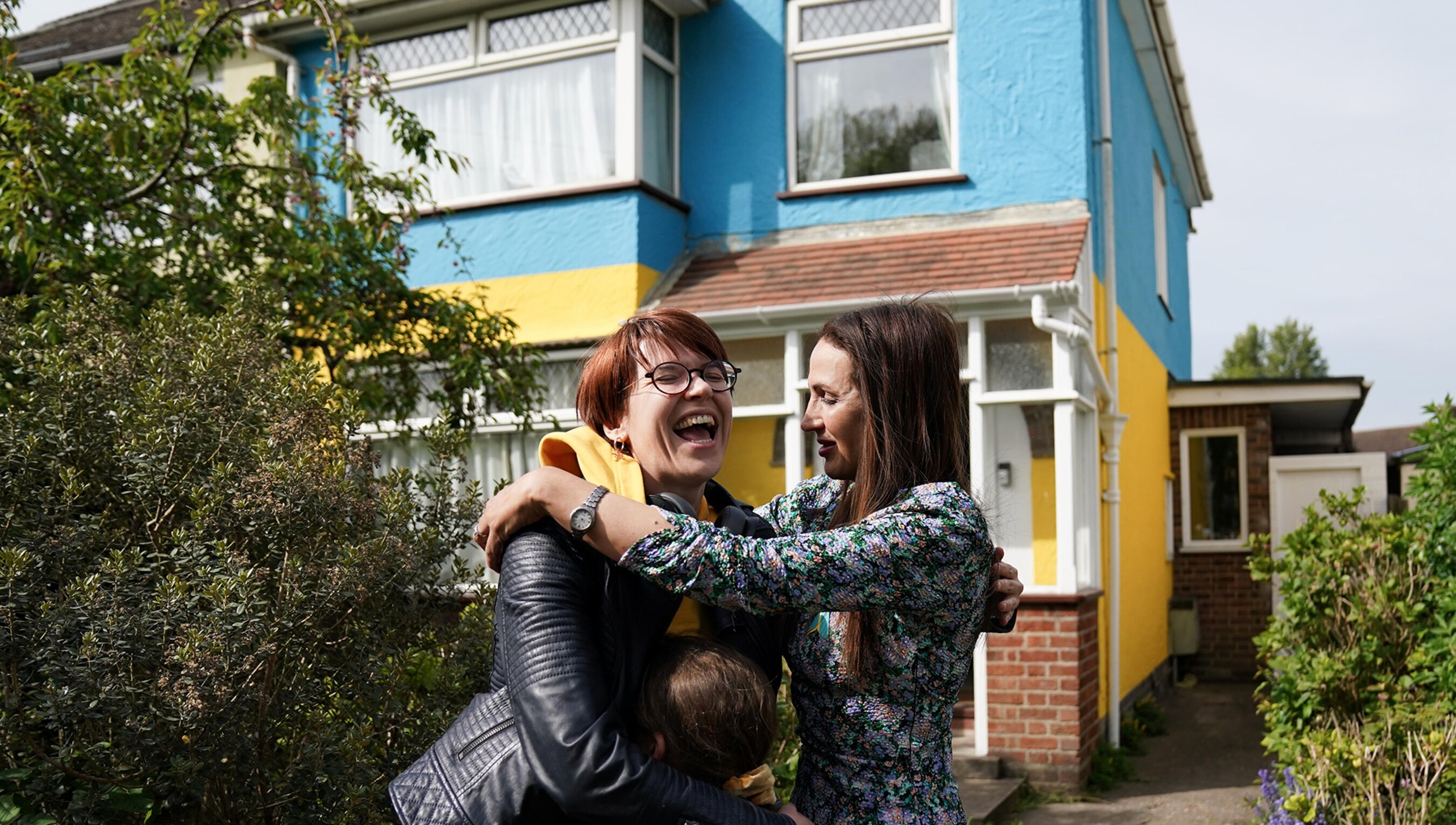 Cofounder of Mums4Ukraine, Rend Platings (right), welcomes Ukranian Kristina Korniiuk to her home painted in the colours of the Ukrainian flag in Cambridge, UK. Photo by Jacob King/PA/Getty

Cofounder of Mums4Ukraine, Rend Platings (right), welcomes Ukranian Kristina Korniiuk to her home painted in the colours of the Ukrainian flag in Cambridge, UK. Photo by Jacob King/PA/Getty

is Presidential Penn Compact Associate Professor of Philosophy, with a secondary appointment at the Graduate School of Education, at the University of Pennsylvania. She is also a senior fellow at the Center for Ethics and Education at the University of Wisconsin-Madison. She is the author of Moving Up without Losing Your Way: The Ethical Costs of Upward Mobility (2019).

Despite being in a profession where rejection is the norm, I tend to let pessimism get the best of me. A rejected manuscript will still send me into spirals of self-doubt. In the days before the COVID-19 pandemic, when the dark abyss of negativity would beckon me, I could count on those around me – family and friends – to help me recalibrate. With their help, I would recognise that I had been overly focused on the negative, ignoring evidence of past success or forgetting the positive feedback I had received.

Then the pandemic struck. When it started making its way into the news, I became convinced – as usual – that the worst was coming. And – as usual – the optimists around me pushed back. Two years later, my pessimism has triumphed. Now, when I spiral into a variant-fuelled vortex of anxiety, instead of the exasperated and compassionate smiles of the optimists, I encounter the glum nods of other pessimists. I used to get annoyed by the eternal optimists; now, I miss them. We are caught in a collective pessimism trap.

It makes sense that people feel increasingly pessimistic about our collective future. The impending threat of a world war, the increasing certainty of catastrophic climate change, and the neverending pandemic threat have taken their toll not just on our livelihoods but also on our outlook. In the EU, a survey conducted in December 2019 showed that 58 per cent of European adults felt optimistic about their own future, whereas only 42 per cent were optimistic about their country’s future. More recently, a survey from January 2022 in the United States showed the gap between personal and collective outlook at a record high, with 85 per cent of American adults reporting feeling satisfied with their own lives, and only 17 per cent satisfied with the direction in which the US is going. This gap between how optimistic we are about our personal lives and how pessimistic we are about our collective future is known as the ‘optimism gap’. There has been much debate among psychologists and economists about what fuels the gap but, whatever the reasons, pessimism about our collective futures has potentially dire consequences.

The problem with pessimism is that it saps our motivation to try. Most of us are familiar with individual pessimism traps. You think it unlikely you can run that marathon, so you decide to not even try. Your neighbour running past your window while you sit on your sofa reading the news on your phone only confirms your sense that maybe running wasn’t for you after all. Pessimism traps can strike the collective will as well. If each of us as individuals is certain that our collective projects will fail, then we might as well not waste our time trying. And if we don’t try, then we increase the likelihood that our fears about our collective futures will become true.

On one way of looking at it, the question might seem misguided. We cannot simply choose to believe what we want. Our beliefs aim at giving us a true picture of the world. To do so, our beliefs need to be responsive to evidence. Maybe we are finding ourselves trapped in the dark abyss together because the evidence is, by all accounts, bad. Climate change isn’t only happening; it appears to be accelerating. We have believed the pandemic to be over before, only to be set straight by the resurgence of new variants. Many of us thought that the days of armed conflict in Europe were behind us, only to find ourselves on the brink of another world war. Isn’t the rational response to this to believe that we are doomed?

This might be the rational position to take if our beliefs were concerned only with getting it right. But our beliefs about what we can achieve are different. They concern a future that is yet to be determined. Should we believe that we can meet the enormous challenges in front of us? Signs are both depressing and encouraging. Our collective response to the pandemic has been divided, anaemic and self-undermining; nevertheless, many young people are activated and motivated. Ukrainians have been fighting what might have seemed a doomed effort, yet they are still at it. We cannot seem to tackle the proliferation of misinformation across the globe; yet scientists developed a COVID-19 vaccine in record time.

The evidence would seem to go either way. If our beliefs are concerned only with being correct, then both pessimism and optimism seem equally rational. The evidence doesn’t tell us either way. But we don’t only care about getting it right; we also care about making it right. And our beliefs about what we can achieve play an essential role in motivating us to keep trying when we meet challenges that can discourage us and tempt us to quit. So, even though the evidence is not definitive, we do have good practical reasons to be optimistic.

Return to the individual case. How do we get ourselves out of our own individual pessimism traps? First, we need to stop focusing on the negative evidence and get a broader, richer assessment of our situation. The news is often not helpful here – it thrives on confirming our sense of doom. We need to make salient, for ourselves and each other, any evidence of people working together and succeeding. People across Europe have risen to the challenge and welcomed Ukrainian refugees into their homes. A community group in your neighbourhood right now is working together to clean a park or fund a new playground.

However, as in the individual case, shifting your attention is not enough. We need to do the work. The first few runs give you the confidence to keep running. And the more miles are behind you, the easier it is to get to 26. Each of us needs to do our part in exercising our collective muscle. In our pandemic world, this is not easy. We are isolated. Like many others, I have retreated into the comforts of home. My joys these days are more likely to come from the adorable shenanigans of my four-year-old. But we need to remember that, by doing our part, we make it more likely that our neighbours believe they won’t be wasting their time by joining us. That’s how we get things off the ground. Combatting climate change, for example, might seem like the kind of goal that is beyond what we can reasonably expect to achieve. But there are other goals – setting up composting in our neighbourhoods, reducing vehicle emissions, improving home insulation – that are within the purview of the achievable. Achieving these goals and reminding ourselves and each other of our accomplishments can embolden us to reach for ever more ambitious goals. It is rational to believe that we will be able to rise above the current moment, but we need to help each other believe it again.