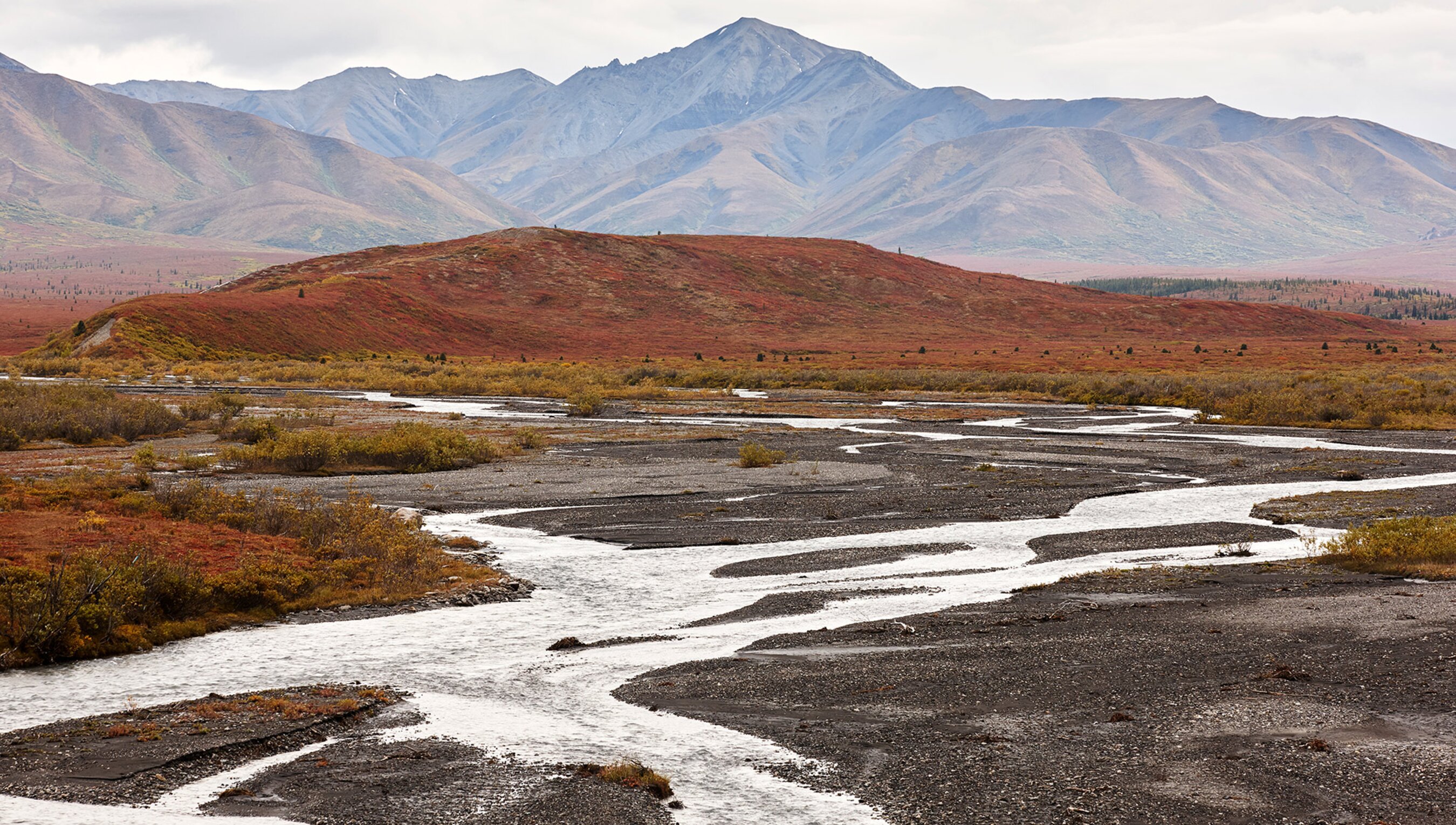 What does water want? Most humans seem to have forgotten

is an independent journalist who covers science and the environment from Victoria, British Columbia, and San Francisco, California. Her work appears in The New York Times, Scientific American and National Geographic, among others. She is the author of Water Always Wins: Thriving in an Age of Drought and Deluge (2022).

Walking across spongy tundra, among bonsai shrubs on fire with autumn colours, I came upon a river too wide to cross. Gazing up the valley from which it flowed, I saw that the obstacle blocking my path was just one strand of a broad, braided system spread languidly across a floodplain in Denali National Park in Alaska. I watched the McKinley River’s fluid columns shift apart, then twine together. Although at that time I knew little about hydrology, the science of water, on some instinctual level I understood that this was a free river. Every other river I’d known was markedly subdued.

What does it mean for a river to be free? Today, most water is not in its natural state, especially in industrialised countries. It sounds obvious, but I hadn’t before given it much thought. Humans have filled in or drained 87 per cent of the world’s wetlands. We’ve dammed and diverted two-thirds of the world’s largest rivers. What many of us think of as ‘river’ is a restricted, straightened canal that no longer wanders across its floodplains, depositing nutrient-rich, land-forming silt as it goes. The streams and wetlands that first attracted us to settle and build cities have long since been encased in pipes or filled with trash and dirt. In fact, the area of land, streams and wetlands covered by cities’ pavement has doubled since 1992. In rural areas, too, we’ve uncurled creeks, drained and filled wetlands and lakes, and blocked off floodplains to create more farmland or real estate for new developments. These attempts at control affect not only where water flows, but greatly increase the speed at which it moves. Water is sped through our cities, and prevented from sinking underground where it could refill aquifers and cycle through local ecosystems.

The scale of our efforts to control water is vast. But control is illusory. Water does what it wants, as we are seeing increasingly often, as people around the world grapple with severe floods and droughts.

In the summer of 2022, one-third of Pakistan turned into a giant roiling lake, and people walked across the dry beds of China’s Jialing River and Germany’s Rhine. At almost the same time, parts of eastern Australia were subsumed by high waters, turning cities to turbid lakes – flooding that continued throughout the year. And the giant reservoirs that feed the southwest United States lay nearly empty, revealing decades-old plane crashes and skeletal remains.

The response to such disasters is inevitably a call for bigger drains, longer aqueducts and higher levees – tighter control mechanisms. But in fact, it’s not just the climate crisis causing these water extremes. Our development choices – urban sprawl, industrial agriculture, and the way we try to control water with hyper-engineering – interfere with the water cycle, making these problems significantly worse. In the wreckage of disasters in the US, like Hurricane Sandy in 2012 or Harvey in 2017, we see that homes built atop wetlands are the first to flood. We are reminded that water has agency, and our attempts at control actually make us more vulnerable.

Many industrialised societies prioritise human need and, in so doing, cast water as a commodity or threat, leading to single-minded problem-solving. But this ‘us first’ mentality isn’t doing humans any favours. Our domineering approach to water ignores the ways that hydrological systems interact with rocks, soil, plants, microbes and animals – including us. Disturbing these systems causes myriad unintended consequences.

Fresh water’s true nature is to flex with the rhythms of the earth, expanding and retreating in an eternal dance upon the land

About a decade ago, I began thinking about these systems and consequences. To understand more about our relationship with water, I spoke with hydrogeologists, ecologists, landscape architects, city planners, environmental engineers and other experts. I found that these ‘water detectives’ were all investigating one question, asked from a place of respect, rather than hubris: what does water want?

Although the question may sound radical, it is rooted in acceptance of reality: sooner or later, water always wins. That admission is not weakness but a foundation for strength because the detectives are opening themselves up to new ways of thinking. They taught me to cultivate curiosity about water, planting the seeds for a new kind of relationship.

So what does water want? Most modern humans have forgotten that fresh water’s true nature is to flex with the rhythms of the earth, expanding and retreating in an eternal dance upon the land. It’s hard to feel these rhythms when rivers and streams are buried and hurried away via concrete pipes or canals. In fact, water is inclined to linger to a degree that would shock most of us because our conventional infrastructure has erased so many of its slow phases: floodplains, wetlands, mountain meadows and forests.

But when water slows on the land, that’s when the magic happens. Water cycles underground, supporting habitats and food for many forms of life, including us. In many places around the world, groundwater is considered an emergency supply when surface water runs low. But, in fact, what’s below and what’s above are intricately linked by gravity and hydraulic pressure. A full underground aquifer can help feed a river’s flow, pushing water up through its streambed during the dry season. And vice versa: when groundwater levels fall, river water can filter down to replenish it, leaving less water on the surface. The key to greater resilience to both flood and drought, say the water detectives, is to find ways to let water be water, to reclaim space for it to interact with the land.

In the past few years, I’ve visited innovative water projects led by water detectives in the US, Peru, England, Kenya, Iraq, India and China. Though many standard engineering projects around the world continue to speed up water, the projects I saw all aim to slow water on land in some approximation of natural patterns. For that reason, I’ve come to think of this trend as the ‘Slow Water’ movement. Like the Slow Food movement founded in Italy in the late 20th century in opposition to fast food and all its ills, Slow Water seeks to remedy the ways in which redirecting and speeding water off the land causes problems.

Slow Water mimics or collaborates with natural systems, restoring space for water to slow on land in wetlands, floodplains, mountain meadows, forests, tidal marshes, and mangroves. Slow Water is distributed, not centralised: think of the wet zones scattered throughout a wild watershed instead of a big dam and reservoir. It is also socially just: Slow Water doesn’t take water from some people to give to others, or protect some communities while pushing floods on to another. Slow Water gives communities agency to restore resilience to their local landscapes and revive local cultures. And in taking a systems-oriented approach, it simultaneously supports local water availability, flood control, natural carbon storage, and other-than-human life.

Indigenous cultures often view water not as a ‘what’ but a ‘who’ – a friend or relative, a collaborator in a reciprocal relationship

Considering what water wants may sound a bit mystical, even radical. In fact, it’s a practical and proven path to creating a better world. While decision-makers, scientists and engineers play a large role in shaping the critical human-water relationship, we can all help shift the nature of that bond.

My own relationship with water was forged during the severe 1976-77 drought in California, when grade-school assemblies taught us to conserve water. That message of scarcity, that water is precious, is deeply embedded in my brain. I also dipped into water’s wilder side. On family camping trips, I took it as a point of pride to swim in any body of water we came across, from big breakers off Santa Cruz to an 8,000-foot-high alpine lake. But like watery landscapes everywhere, my beloved places are changing. The lakes and rivers are dwindling, or flooding. The Pacific Ocean is warming, fuelling bigger atmospheric rivers that dump more rain at once.

The human impacts of these changes affect us economically, physically, and psychologically. Insecurity around the behaviour and availability of water is destabilising. Trauma triggered by flooding and water scarcity seems to be all around us today. The landscapes where we live are imprinted upon our psyches, freighted with personal and cultural meaning. So, when droughts and floods harm us, or force us to move, we suffer loss: loss of property and possessions; loss of home and community; loss of beloved landscapes and their distinctive species, weather, sounds, and scents; loss of quality of life. That melancholy is a feeling that stalks many of us today. But more of the same doesn’t need to be our future.

The impulse to control water in ways that have contributed to many of our current troubles is not innately human. Instead, Indigenous and other land-based cultures around the world often view water not as a ‘what’ but a ‘who’ – a friend or relative, a collaborator in a reciprocal relationship. That perspective changes our relationship with water, fostering a willingness to care for systems that provide for us. In some parts of the world, this perspective has become enshrined in law: the Whanganui River in New Zealand, the Ganges in India, and the Magpie River in Quebec have won legal personhood. Other communities around the world are also fighting for legal rights for their rivers, wetlands and watersheds. A river’s rights can include the right to flow, to be free from pollution, to fulfil its ecosystem’s essential functions. All of these are possible when we provide space for water to reclaim its slow phases.

The climate crisis can seem overwhelming, but Slow Water empowers people to make their own communities more resilient. Such projects can simultaneously buffer us from flooding and drought, slow climate change via natural carbon sinks, and support other forms of life, which in turn helps water systems maintain themselves. At the scale of home, town and watershed, we can bring back into our human habitats small, connected pieces of wildness where water can freely interact with land once again. These more natural places can also cultivate more peaceful spaces within us, and greater personal adaptability. Slowing ourselves to observe the nuances of our environment – the ebb and flow of water, the growth and decay of plants, the behaviours of other animals – is meditative and joyful. These are invitations to get curious; to ask: ‘What does water want?’