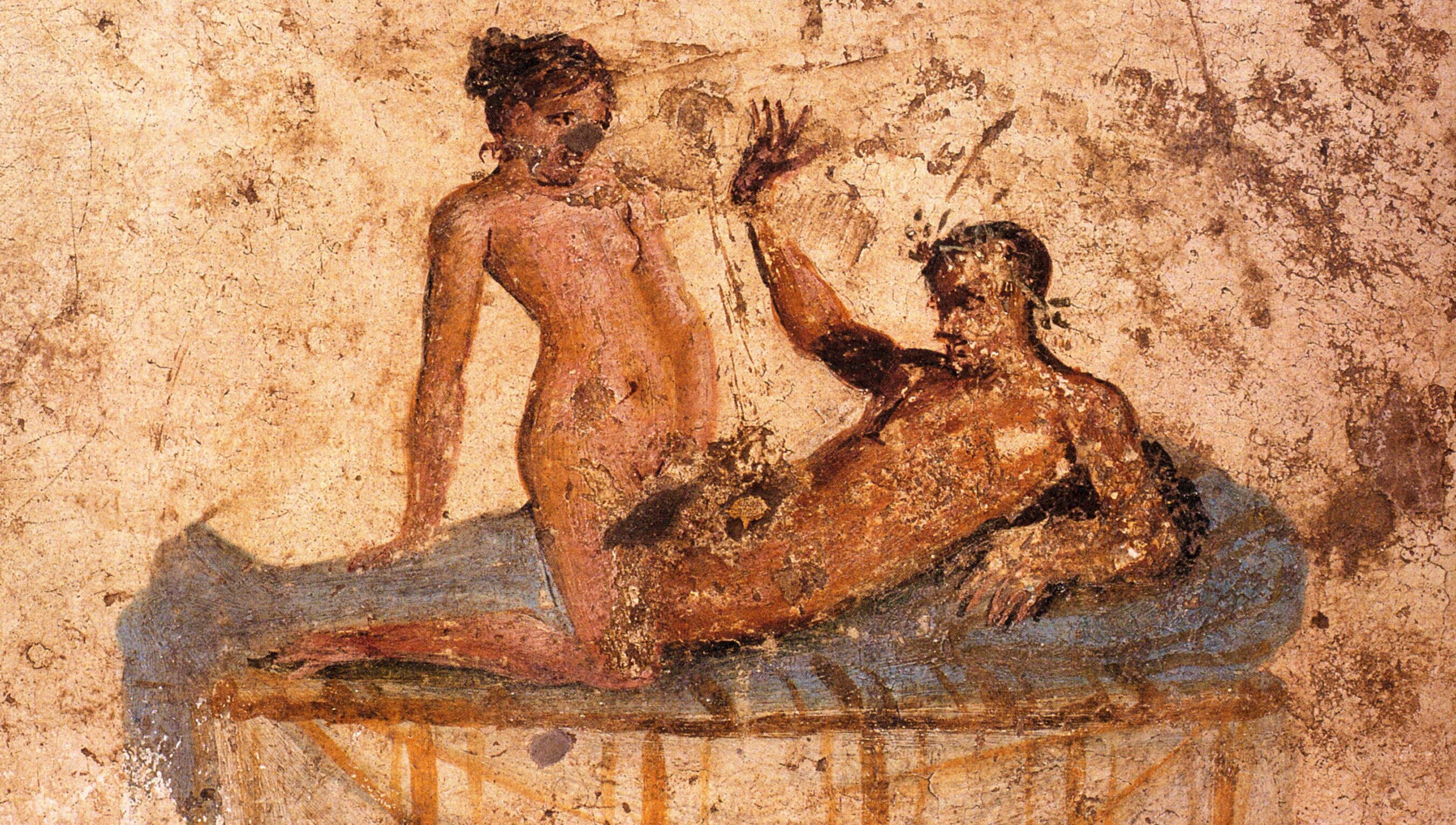 is associate professor in ancient studies at Thorneloe University at Laurentian in Ontario, Canada.

‘Every woman’s man and every man’s woman.’ That’s what one of his political rivals called the great Roman general and leader Julius Caesar, according to the historian Suetonius. The derisive criticism of Caesar wasn’t an isolated insult: his own soldiers, marching in his triumphs, sang songs about how he’d been happy to be screwed by one of Rome’s allies, the king of Bithynia, while also warning the men of Rome to ‘lock up their wives’ because the ‘bald adulterer’ was coming home.

The Roman men who today appear on television and movie screens generally fall into three groups: manly soldiers conquering their way across the Mediterranean; buff and gritty gladiators fighting to the death; or decadent and luxurious emperors indulging in various sensual delights. And when those men have sex, it’s usually with women overpowered by violence or by desire, though the emperors might also indulge in various orgiastic or ‘perverted’ pleasures. But how does the historical Julius Caesar fit into that picture? By looking at the man whom his co-consul called ‘Queen of Bithynia’, we can learn a little bit of the texture and feel of Roman ideas about sexuality and gender. And that insight into the mutability of sexuality across cultures – even ones so connected as ancient Rome and the modern West – can help to free us from the limitations placed on sexuality and gender by the societies we inhabit.

Like many premodern societies, the Romans rarely if ever identified people by their sexuality, at least not in terms of what gender their sexual partners were. To be sure, they had categories for types of sexual activities, but not for the sexual identities we use today. The terms ‘homosexual’, ‘heterosexual’, ‘bisexual’ and so on are modern inventions. There is no evidence for the existence of the concepts themselves, and Romans didn’t define people by the gender of their sexual partners.

But that doesn’t mean the kinds of sex we’d label with those words didn’t exist – far from it. The common pairings we read about and see depicted in art are men with men, men with boys (who are often adolescents, but could also be younger), and men with women. We also see and read about a range of sex acts within those pairings, using all possible orifices. And in all these combinations and activities, we see again and again that it isn’t the genders involved or the acts themselves that the Romans cared about, but the question of who’s doing it, and who’s being done to. That’s where gender and status suddenly mattered – a lot.

The key thing, for a Roman, was that your sexual participation lined up with your perceived gender. The essence of masculinity was to be the penetrator, while to be vulnerable to penetration was to mark yourself as nonmale. And yes, penetration specifically refers to the penis, though it could be extended metaphorically in various ways. By the way, this focus on penetration with a penis seems to explain the notable omission in the pairings listed above: women with women are hardly ever mentioned or depicted in Roman sources, except when they are said to use some sort of penis substitute to achieve penetration. It seems that, for Romans, if no one was getting penetrated, it didn’t count as sex.

The flip side was that, as long as the man was doing the penetrating, he was (usually) living up to his masculine duties – and it didn’t matter whom exactly he was penetrating. A woman, another man, or even – most shockingly to a modern audience – a child were all considered to be potentially sexually attractive to an adult man, and any of them could be a legitimate object of his attentions. At least in terms of preserving his manliness, that is – various people were off-limits because of their status, such as married women and free citizen children, but enslaved people and noncitizens were legally unprotected against sexual assault. (That doesn’t mean everyone observed those limits, of course, but there were various laws put in place to try to enforce them.) To be what we would deem ‘heterosexual’ – interested only in women – was possible, but not the default, and was worthy of at least as much comment as being interested only in boys.

Being vulnerable to penetration signalled a lack of control over one’s own body and, while the ancient Romans considered that appropriate for women and unavoidable for slaves, it was not at all compatible with the obligations of free men. The hallmark of a Roman man was his control – over others, but also over himself. Control over others could be demonstrated or enacted by penetrating them, but self-control was displayed in part by refraining from excess. And this meant that, while it was manly to have sex with others (regardless of their gender or age), it was unmanly to have too much sex. It was especially unmanly to be so overcome by sexual desire that you crossed acceptable social boundaries and had sex with people who should have been off-limits.

While gladiators were seen as sexually attractive in ancient Rome, they were also almost always enslaved people

Control over others, and over yourself, was also, according to Roman thought, a feature of a free man as opposed to an enslaved person. One of the defining aspects of enslavement was the loss of control over your own body. Enslaved people could be, and often were, used as sexual objects, with their consent being irrelevant. A free adult Roman man distinguished himself from the enslaved people around him by demonstrating his control over them and, conversely, a Roman man who was penetrated by another, voluntarily or not, had demonstrated his lack of control, and was notionally (and sometimes legally) deprived of his citizen status and masculine identity.

This issue of legal status and of slavery bears on that other manly Roman archetype, the gladiator. While gladiators were seen as sexually attractive in ancient Rome just as they often are today, they were also almost always enslaved people. They had a reputation as irresistible to women, but that hypersexualised image is actually consistent with their enslaved status, within Roman ideology – because it reflected their excessiveness and lack of control. It stood in contrast to the moderation prized in the free citizen Roman man. Like actors and other entertainers, they were by the nature of their work open to the objectifying gaze of others. Even this sort of metaphorical penetration made them appear somewhat unmanly.

As an adult, on the other hand, Caesar was well-known for his many affairs with noble women – Suetonius says he even seduced the wives of his two ‘partners’ in the First Triumvirate, Crassus and Pompey. When his political opponent accused him of being ‘every woman’s man and every man’s woman’, to a Roman audience he was making two linked accusations with the same implication. He was saying that Caesar was not in control of his desires with women, and that he also didn’t maintain control over his own body, since he had been penetrated by a man. So he was clearly implying that, because of his sexual practices, Caesar was unmanly, and therefore unfit to be a Roman magistrate, soldier or public figure.

When Caesar’s soldiers sang songs about him having been ‘conquered’ by the Bithynian king, it wasn’t pure derision. They also did it to make Caesar’s own ‘conquest’ of Gaul the more impressive, while poking fun at their commander’s notorious past. And it would have seemed perfectly consistent to, at the same time, mock his many affairs with women (Cleopatra being only the most famous), since that unmanly excessiveness was on the same continuum as his alleged ‘submission’ to penetration.

In the end, none of the open gossip and accusations harmed Caesar – he conquered not only Gaul but the whole Roman world, and those political rivals ended up submitting to him – if they weren’t killed. It was his consistent military success, in fact – and his reputation as a strong leader, good commander and powerful speaker – that allowed him to overcome such accusations, and rendered them harmless jokes for his soldiers to make, instead of damaging attacks. But given the Roman view of sexuality and masculinity, and the emphasis on control and domination, it’s not surprising that, once he rose to a position that made it obvious he had full control over other men of his own class and rank, it made those men so angry that they assassinated him.

Caesar’s career gives us a fascinating glimpse of both Roman normative ideology, and the way that actual lives could work within and against that ideology. There is much about Roman sexuality that isn’t admirable and certainly shouldn’t be emulated. But few things provide as powerful a tool to fight tendencies to naturalise any one view of sexuality as the broad and deep cultural history of sex and gender in human life. It shows that many common assumptions about sexuality and power are indeed just assumptions – that heterosexuality and military prowess don’t automatically go together, and that hypersexuality doesn’t necessarily make someone manly and powerful. What we are too often taught to think of as ‘natural’ is, in fact, dependent on the societal values of a particular time and place, and what is obviously ‘true’ in one culture is just as obviously unthinkable in another. This can be a liberating realisation: if these basic connections between sexuality, masculinity and power aren’t inherent, then they can be changed – we can, in fact, choose for ourselves how we shape our ideas about gender and sexuality, today and in the future.