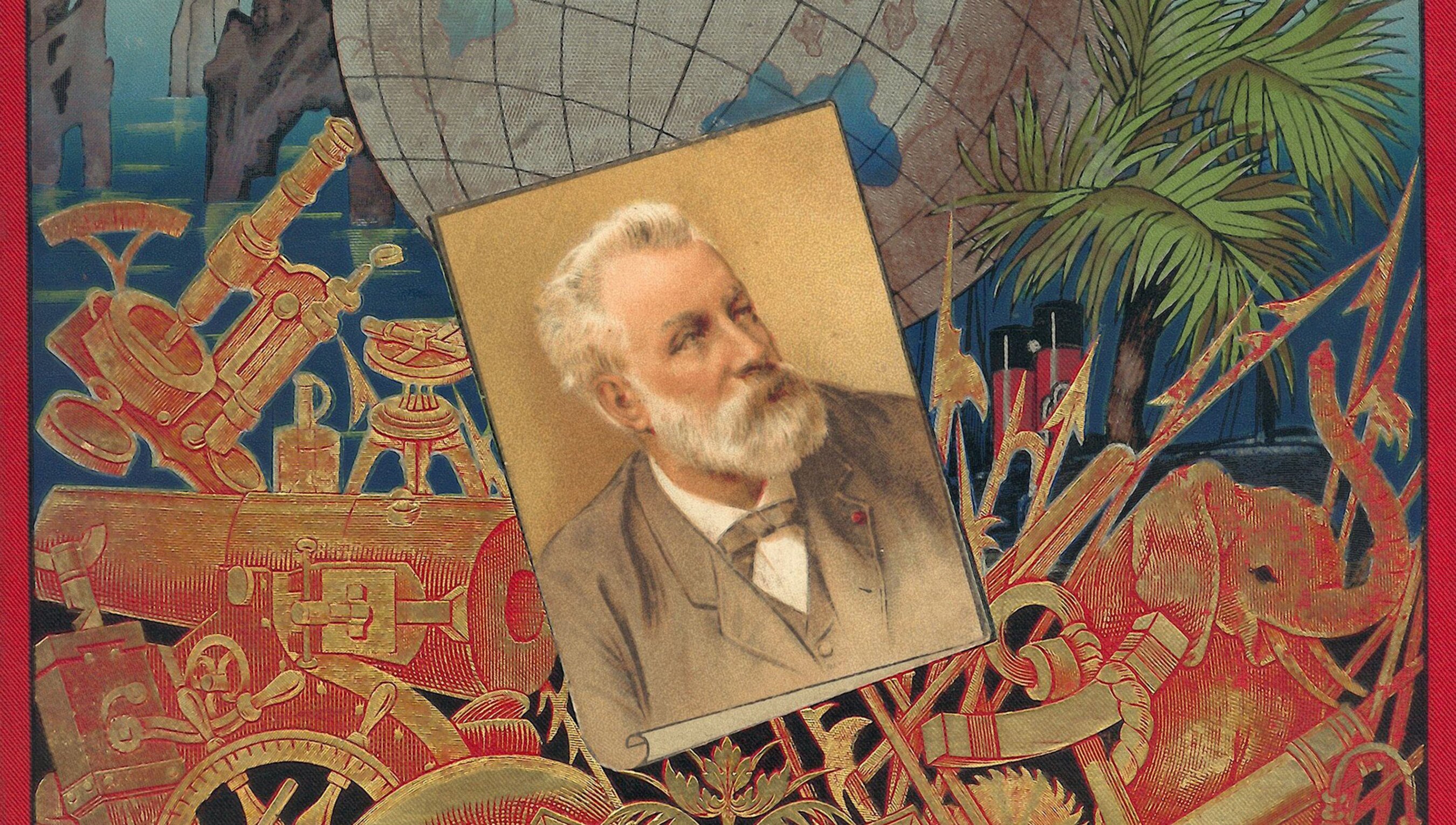 is a postdoctoral researcher in the Minds and Traditions research group (aka 'the Mint') at the Max Planck Institute for Geoanthropology in Germany.

Edgar Allan Poe was an inventor. Throughout his short life, Poe constantly experimented with new literary forms: he wrote the world’s first modern detective story, ‘The Murders in the Rue Morgue’ (1841); he redefined the gothic horror genre; he helped develop the poetic movement called Symbolism; and his novel about a stowaway on a fantastical voyage to the South Pole, The Narrative of Arthur Gordon Pym of Nantucket (1838), is one of the earliest examples of science fiction. This experimentation might have made him popular, but it did not make him wealthy. Poe died poor in 1849. One mean-spirited obituary, written by a literary rival, reads: ‘Edgar Allan Poe is dead. He died in Baltimore the day before yesterday. This announcement will startle many, but few will be grieved by it.’

Jules Verne was not an inventor. Despite being seen as an innovator, he shared little of Poe’s literary ingenuity. Born in 1828, he is often credited with inventing the genre of science fiction, thanks to his novel Five Weeks in a Balloon (1863), in which Europeans explore the African continent in a hot-air balloon. After finishing a draft of the novel while also working at the Paris stock market, Verne supposedly told his colleagues:

My friends, I bid you adieu. I’ve had an idea … that should make me rich. I’ve just written a novel in a new style … If it succeeds, it will be a gold mine.

But the idea wasn’t his. It belonged to Poe, who had already written a similar story almost two decades earlier known as ‘The Balloon-Hoax’ (1844). Verne’s ‘new style’ succeeded, and for the rest of his life he published novels following a strict genre formula based on Poe’s writings. The long list of his ‘voyages extraordinaires’, as Verne called them, includes Journey to the Centre of the Earth (1864), Twenty Thousand Leagues Under the Seas (1869-70), Around the World in 80 Days (1872), and more than 50 others. Verne would die in 1905, extremely rich, proving that writing novels can be a better career choice than selling stocks.

Two writers, two distinct approaches to their craft, two different legacies. Poe, the writer-inventor, who experimented with forms and styles; and Verne, the writer-entrepreneur, who reproduced one popular (and lucrative) genre, with some variation, over and over again. These are two opposite strategies that have been taken by many artists before and since. The first strategy is a form of exploration. It is a search for novelty and difference, often through trial and error. The other strategy? Exploitation, relying on an approach that has already proven itself. Thinking in terms of these strategies changes not only how we understand the writers of the past, but also the work of contemporary filmmakers, dancers, musicians, performance artists or YouTubers.

It is not just Agatha Christie who repeats herself. Most writers do. They don’t resemble creative geniuses so much as diligent craftsmen

Recent studies in ‘computational humanities’ – a discipline that merges computer science with the study of literature and the arts – have aimed to research such strategies empirically, by analysing massive amounts of visual and textual data. In one study, a team of researchers lead by the professor of English (and data scientist) Ted Underwood at the University of Illinois Urbana-Champaign built a ‘topic model’ of almost 11,000 works of fiction published from 1880 to 1999. Topic modelling is a technique of computational text analysis that provides a rough idea of the content of books – without actually reading them – by counting words and measuring their co-occurrences. In their study, the researchers explored historical changes in literature.

So, do authors change topics frequently or rarely? And what is more common: exploration or exploitation? Apparently, it’s exploitation. Figure 1 below, from the study, shows a comparison of 10 crime fiction authors. Each dot is a book, plotted according to its year of publication. Dots of the same colour share the same major topics, which are determined algorithmically, based on counting co-occurrences of words in each book.

The results show that most authors pursued the same topic throughout their life. Whoever has read crime fiction, knows how similar these novels can be: almost all Agatha Christie’s books feature countryside mansions, private investigators, intricate motives for murder, and so on.

Crime writers are at one extreme end of the exploration/exploitation spectrum. No surprises there. But what is the extent of exploitation outside this genre, in literary history overall? It turns out that the strategy of exploitation prevails in fiction at large. Knowing the topics of just a few books by an author, fairly accurate predictions can be made about the rest of their books. It is not just Agatha Christie who repeats herself. Most writers do. They don’t resemble creative geniuses so much as diligent craftsmen who manufacture good-enough items to satisfy their customers – labourers in a literary factory.

Why such repetitiveness? Or perhaps, rather than asking ‘Why do authors write similar books?’ we’d learn more by asking ‘Why do readers agree to read similar books?’ There is abundant research in psychology showing that the consumers of films, music or literature are rather conservative in their tastes: we prefer artistic products that are similar but not identical to what we have already consumed. Having read (and liked) one detective novel, we will likely choose another detective novel, instead of trying something new. An experimental study of ‘musical tastes’ by two US marketing researchers, Morris B Holbrook and Robert Schindler, offers a possible explanation: our musical tastes crystallise between late adolescence and early adulthood, and don’t change much afterwards. If you happen to listen to indie rock in your 20s, then you’ll most likely still be listening to it in your 60s.

This picture of artistic history as relatively repetitive and conservative may seem gloomy. But apparently the picture isn’t complete. Another recent study of exploration and exploitation adds important nuance. A team lead by the management professor Dashun Wang at Northwestern University in Illinois aimed to explain ‘hot streaks’ in arts and sciences: the periods in individuals’ careers when they produce several high-impact works in close succession. For example, Verne kept writing ‘voyages extraordinaires’ throughout his 40-year career, but his most popular novels were created during the first 10 years: his hot streak.

Artists and scientists experiment with styles and topics early in their careers but, when success arrives, they begin repeating whatever brought them success

Why do hot streaks happen? To answer this question, the researchers analysed the career trajectories of more than 4,000 film directors, 20,000 scientists, and 2,100 painters. First, they identified hot streaks in the data by using several metrics of success. For example, as a proxy of the success of films, the researchers took average ratings on the Internet Movie Database. Afterwards, they measured the diversity of each individual’s work (films, research papers, or paintings) before and after the beginning of a hot streak. They found that the works before a hot streak are more diverse than ones during the hot streak. That is, an initial stage of exploration is then followed by a stage of exploitation. Artists and scientists experiment with styles and topics early in their careers but, when success arrives, they begin repeating whatever brought them success. A good example is the abstract expressionist Jackson Pollock. He became well known for painting by simply dripping paint on a canvas on the floor. However, before his ‘drip period’, Pollock experimented with artistic styles, including less abstract ones (see below).

Thus, exploration and exploitation aren’t mutually exclusive. They are two strategies that, in the case of successful artists, are combined in a particular sequence: first, exploration; later, exploitation. Young artists will experiment and try various styles to prove themselves. But once they find an approach that brings them recognition, they often stick to it – at least for some time – thus maximising the benefits of their success.

Now, back to Poe and Verne. Poe was mostly experimenting; Verne, mostly exploiting. Verne admired Poe. He wrote an essay titled ‘Edgar Allan Poe and his Works’ (1864), imitated Poe’s writing style, and even wrote a whole novel – An Antarctic Mystery (1897) – continuing the story of Poe’s Arthur Gordon Pym of Nantucket. But, most importantly, his whole life was dedicated to exploiting an idea that emerged thanks to Poe’s creative exploration. It’s almost as if the sequence of exploration and exploitation, in this case, trespassed individual careers. It took two people to complete the sequence. Sadly, Poe never got to enjoy the rewards of the second phase, the ‘hot streak’ of success.

This does not mean, of course, that financial success is the only goal of writers – far from it. More often, the goal of writing is to develop ideas, to record events, to persuade, to dream, to remember, to play. But thinking about the history of literature and art in terms of the two strategies opens up unanswered questions about ethics: did Verne owe anything to Poe? And, more generally, how ethical is copying in the arts? Art is commonly portrayed as a domain of creativity or even ‘genius’, but it is also a domain of diffuse, shared influences and outright copying (even ‘stealing’) as artists reproduce their own work or that of others. Copying ideas or styles is not necessarily wrong, but what role is there for acknowledgement?

Verne made numerous efforts to pay his debt to Poe, but many authors do not. And it is understandable, too. Giving credit in the arts is not easy: there is no formal mechanism for it. Science has the system of citation: academics cite each other, thus recognising each other’s intellectual contributions. Artists usually don’t, which may lead to quarrels and even lawsuits. What could a system of giving credit in the arts look like? It’s hard to say. But such a system, whatever it might be, would showcase an important, and usually hidden, strategy of artmaking: exploitation.

And what might Poe think of such a system of accountability? Probably not much. For him, artistic success had little to do with popularity or financial reward. ‘The simple fact is,’ he wrote, that nothing is ‘more thoroughly dignified’ or ‘supremely noble’ than a ‘poem which is a poem and nothing more’. A poem ‘written solely for the poem’s sake’.

Stories and literatureCreativityWork and vocation
19 October 2022