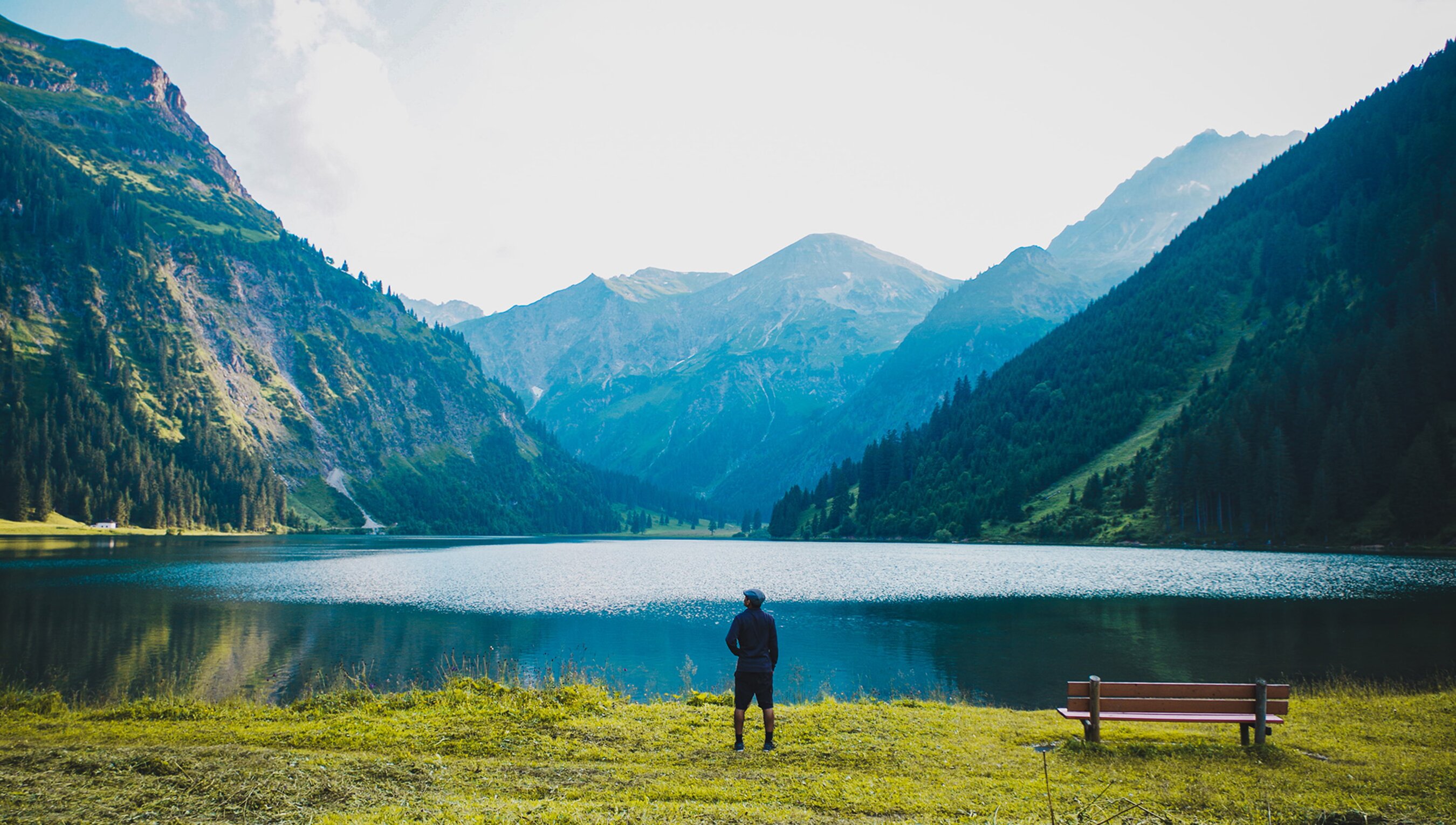 Empathy is, at heart, an aesthetic appreciation of the other

is an empathy consultant and coach, and a writing tutor at the Massachusetts College of Pharmacy and Health Sciences. She is the author of Empathy: A History (2018). She lives in Cambridge, Massachusetts.

Today we think about empathy as a way to understand another’s experience. But when the English word ‘empathy’ first appeared in 1908 as a translation of the German Einfühlung, it denoted an aesthetic ability to appreciate objects and nature. What exactly is this surprising early version of empathy, and can we imagine empathy as an aesthetic practice today?

At the end of the 19th century, German psychologists defined Einfühlung as an aesthetic transfer of our subjective experiences into objects in the world. To empathise meant to project our feelings and movements into forms of art and nature. So, for instance, we transmitted our feelings of rising to the majestic reach of a mountain, we felt our own stretching in the limbs of a tree, and we projected our sense of expansiveness into the vault of a cathedral. One of the central theorists of empathy in this period, Theodor Lipps, declared that empathy fused our own imagined movements and emotions with the shapes around us, and was thus key to our appreciation of beauty.

Aesthetic empathy was possible because it relied on our capacity to generate kinaesthetic images, or mental images of movement and feeling. In the 1870s, psychologists had developed the new method of systematic introspection, a rigorous scientific reflection on the mind that mapped the elements of thinking and perceiving. When psychologists conducted their own introspections, they discovered the kinaesthetic image, which they added to the more common visual and auditory mental images. Edward Titchener, a central figure in establishing the academic discipline of experimental psychology in the United States and director of the Cornell laboratory, affirmed the existence of kinaesthetic images in his own introspections. In a 1909 lecture, he explained that when he uttered the word ‘stately’, for instance, he saw in his mind’s eye a woman holding up a steely grey skirt. This kinaesthetic image combined visual, feeling and movement elements, and became the basis for empathy.

Empathy as a kinaesthetic response was also central to the aesthetic appreciation of modern dance. Because modern dance dispensed with the storylines of classical ballet and presented new, abstract movements on the stage, it relied on audience members to directly respond to the movements they were witnessing. By 1928, modern dance had come into its own: Martha Graham created her own school and company in New York City; Doris Humphrey established a company with Charles Weidman; and Helen Tamiris began work on her Negro Spirituals. With the growing interest in group dance and the more intricate choreography of modern dance, critics began to analyse the budding art form for a new generation of viewers.

John Martin, the modern dance critic writing for The New York Times, argued that, while watching modern dance, audience members felt as if they were imaginatively taking on the poses of dancers while still sitting in their seats. This inner imaginative leap was a form of kinaesthetic empathy. Kinaesthetic empathy activated movement-sense receptors in the spectator, prompting emotional associations and images leading to a grasp of the underlying intention of the movement. Martin educated viewers to fine-tune their own motoric engagement, or kinaesthetic empathy, in order to enhance their individual aesthetic response.

In 1933, Martin declared: ‘We shall cease to be mere spectators and become participants in the movement that is presented to us, and though to all outward appearances we shall be sitting quietly in our chairs, we shall nevertheless be dancing synthetically with all our musculature.’ The empathic participation of the viewer was crucial to the appreciation of modern dance and to the aesthetic respectability of this new art form. One philosopher of the period explained that ‘dancing is the most direct elaboration of empathy (those movements by which we seek to become one with the object we contemplate).’

If embodied aesthetic engagement comprised empathy’s principal definition in the early decades of the 20th century, by the time of the Second World War, this meaning faded. Empathy’s interpersonal meaning came to the fore, and empathy became almost exclusively a matter of grasping another’s experience. However, to do so accurately now required putting aside one’s own feelings and minimising one’s self in order to more clearly grasp another’s experience, which could be very different from one’s own. In the 1950s, a series of psychological experiments explicitly defined empathy as the ability to accurately predict another’s response. Empathy was now the direct opposite of projection, which was a mere attribution to another of one’s own ideas.

The interpersonal model of empathy was rooted in a psychotherapeutic tradition that privileged the client’s emotions over those of the therapist. This approach was first developed in the 1930s by the unorthodox psychoanalyst Otto Rank in collaboration with Jessie Taft, the philosopher and social work pioneer. In the years after the Second World War, the clinical psychologist Carl Rogers adapted this approach to centre directly on empathy in psychotherapy. This empathic style spread widely in subsequent decades into pastoral counselling, a variety of psychotherapies, and even into contemporary coaching techniques.

Psychotherapeutic empathy favours connection over control. Rogers explained that, with empathy, a therapist listens deeply to the client without judgment, appraisal or even the offer of advice. To listen effectively, the therapist puts aside their own feelings and then immerses themselves in another’s experience ‘as if’ it were their own. Rogers advocated for an ‘empathic way of being’ that could be practised in many different kinds of relationships.

As Rogers put it, ‘I don’t try to control a sunset. I watch it with awe as it unfolds’

The empathic way of being is at its core a kind of aesthetic appreciation. In a 1964 lecture to the California Institute of Technology, Rogers explained that an empathic response did not try to control or change another’s situation. Instead, we allow another person to be fully what they are, just as we might admire a sunset. We do not attempt to alter a sunset by saying: ‘Soften the orange a little on the right-hand corner, and put a little more purple along the base, and use a little more pink in the cloud colour.’ Rather, as Rogers put it, ‘I don’t try to control a sunset. I watch it with awe as it unfolds.’

If to reverentially watch a sunset unfurl constitutes an aesthetic response, it might also be seen as a profoundly empathic act. To empathise with another in this fashion is not to critique or judge them, but to resonate with the entirety of their experience. We do not try to change their experience, or even to suggest ways to make it better or different than it is. It is true that another’s experience might not exhibit the beauty of a sunset, but valuing another’s situation in its many dimensions – including its pain and joy – amounts to a humble witnessing. The person whose experience is wholeheartedly appreciated, Rogers claimed, will often feel a powerful healing.

Aesthetic empathy as witnessing is similar to disinterested contemplation, a fundamental feature of aesthetics going back to Immanuel Kant. It is a moment of appreciation for its own sake, not as a means to another end. Aesthetic empathy of this type, however, is different from the kinaesthetic aesthetic empathy of a century ago, understood as the projection of one’s own subjective feelings and movements into an object. And yet both types of aesthetic empathy rely on the power of our imaginative capacity to delight in, and respond with reverence to, others and the world around us.

To appreciate another’s experience in a disinterested manner does not mean we fail to act in light of human suffering and despair. However, without an expansive contemplation of the breadth of another’s experience, we might not discover effective interventions. Empathy thus marks the pause, or the moment of immersion that helps us to see clearly and to fully take in another’s situation without judgment. The insights gained through empathy can then be used in concert with our critical faculties to shape helpful actions.

Empathy as an aesthetic practice challenges our inclination to control and change, and instead asks us to open up a space for appreciation, a space that can be radically transformative.