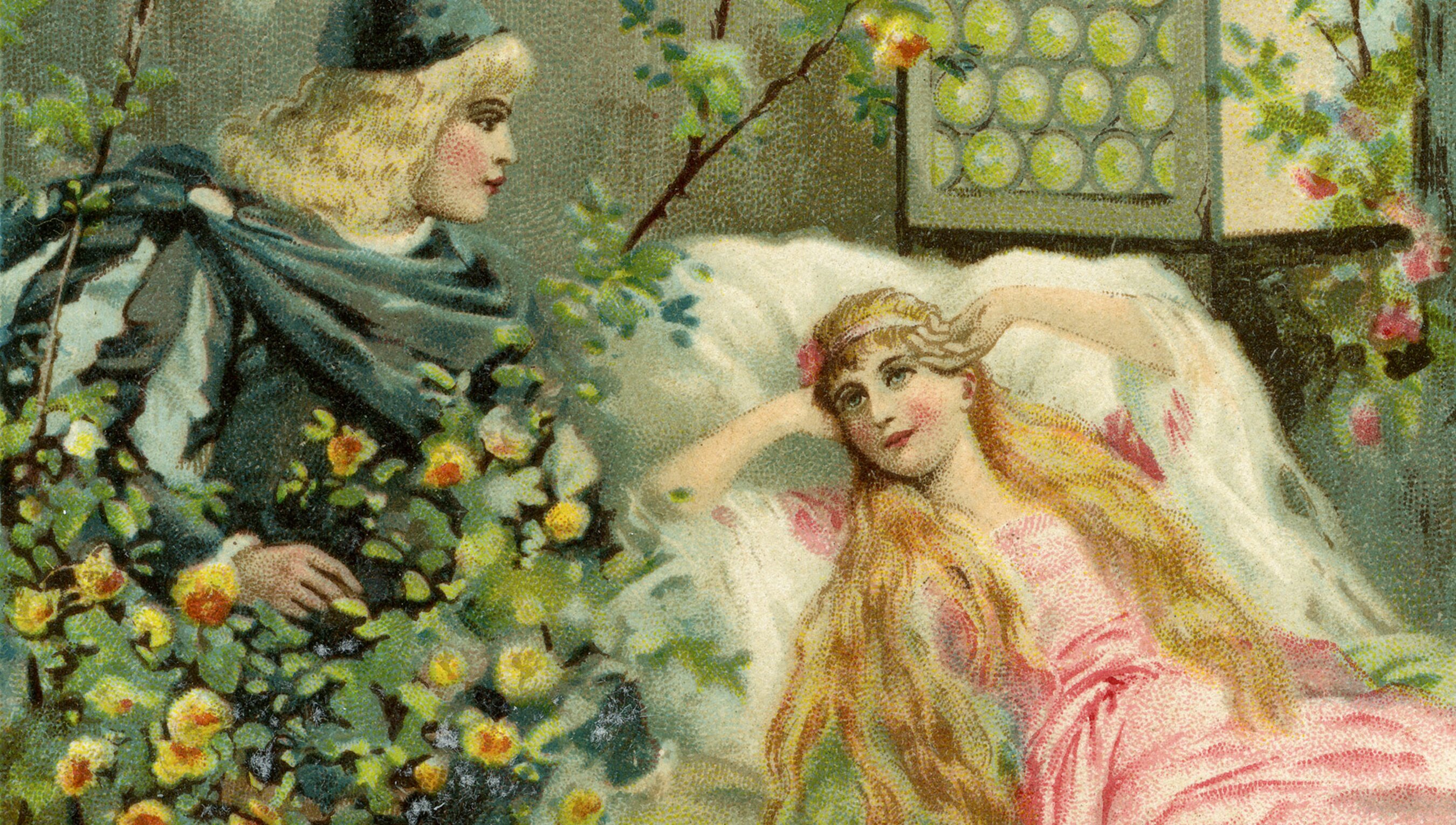 Illustration for Charles Perrault’s version of The Sleeping Beauty. Photo by Getty

Young women were the true originators of the Grimms’ Tales

Illustration for Charles Perrault’s version of The Sleeping Beauty. Photo by Getty

is a novelist and researcher at the University of Manchester, UK. She has recently published a retelling of Hans Christian Andersen’s The Snow Queen (2022) and is working on a book on remembering women in Europe and North America. She writes fiction under the pen names C E Bernard and C K Williams.

The lights are still on at Marktgasse 17. Here, a young woman lives in a cramped flat on the second floor with her five brothers. Their father died when they were very young. Only three years ago, their mother followed him. Since then, it has fallen to the young woman to run the household in Kassel. What a struggle! Even late at night, when the lamps have been lit in the alley outside, and the pharmacy across the street has long closed its doors, she is still sitting at the table grinding coffee beans, while her older brothers entertain young women in the crowded parlour.

It is 1811. Kassel is under French occupation, and her brothers are too busy flirting to help her with the housework. Two centuries later, we will not remember her name. She was called Charlotte. But we remember her older brothers: Jacob and Wilhelm. Meet the Grimm family.

The Brothers Grimm are among the most famous figures of fairy-tale history: from ‘Snow White and the Seven Dwarves’ to ‘Cinderella’ to ‘Little Red Riding Hood’, the tales they had published as Kinder- und Hausmärchen in 1812 and 1815 have become timeless classics. Together with their Danish contemporary Hans Christian Andersen, the Grimms still define what we think of as the classic fairy tale.

In the first edition of the Children’s and Household Tales (1812-15), the brothers claimed they’d collected the tales from the old wives living in the villages surrounding Kassel, suggesting that they were preserving a German folklore and storytelling tradition that was on the verge of disappearance. They were exaggerating. But the Grimms may well have blushed to tell the truth: they didn’t collect their stories from elderly women with dark voices and keen eyes, living in the remote wilds of the Black Forest. They got them while flirting.

While Charlotte ran herself ragged, Jacob and Wilhelm invited their friends into their Marktgasse apartment, and listened with rapt attention. Picture Dortchen Wild, sitting by the fire, her skirts spilling over her lap onto the floor, telling a story: of a sister and a brother, sent into the dark forest by their mother, and unable to find their way back. In the darkest depths of the woods, they find a house made of gingerbread, where a witch lives. A witch that loves to eat little children…

Dortchen spins ever more inventive and spirited tales to keep Wilhelm entertained, the young man she has such a crush on

We can build a picture of how the Grimms collected their stories from the amassed letters, diaries and memoirs they and their circle left behind – from Jacob’s Selbstbiographie (1831), an autobiography, from Wilhelm’s correspondence with Jenny von Droste-Hülshoff, sister of the German writer Annette von Droste-Hülshoff, and from Dortchen’s memoirs. The brothers are not sitting at the table, quills scratching away, heads bowed over paper, but listening very attentively, looking at Dortchen, with her blue eyes, her dark blonde hair. Especially Wilhelm.

Dortchen notices. She spins ever more inventive and spirited tales to keep Wilhelm entertained, the young man she has such a crush on. Her father owns the pharmacy across the street and does not want her to marry a penniless poet. Dortchen couldn’t care less. Sitting in the parlour at Marktgasse 17, with the future statesman Ludwig Hassenpflug and his three sisters, Marie, Jeanette and Amalie also present, she tells Wilhelm stories to impress him, to awaken and feed desire like a modern Scheherazade, to flirt and tease and seduce.

This is not how fairy tales are remembered today, but in the first edition of the Children’s and Household Tales, before the Grimms made significant editorial changes to their material, desire and lust are omnipresent. Take Rapunzel – a tale that, in its first edition, brings the young heroine with the long blonde locks plenty of sexual joy:

So she let her hair drop, and when her braids were at the bottom of the tower, he [the prince] tied them around him, and she pulled him up. At first, Rapunzel was terribly afraid, but soon the young prince pleased her so much that she agreed to see him every day and pull him up into the tower. Thus, for a while they had a merry time and enjoyed each other’s company.
– from The Original Folk and Fairy Tales of the Brothers Grimm: The Complete First Edition (2014) edited and translated by Jack Zipes

Imagine the 18-year-old Dortchen telling this story to a roomful of young women and men, drinking wine and smoking pipes, observed by Charlotte, also 18. The gestures Dortchen might have used when she told her story and the whistles she likely earned from her audience did not make it into the print version of the Children’s and Household Tales, but Wilhelm visited her at her older sister’s garden house in Nentershausen to hear more of her stories, and they were finally married in 1825.

These tales express the frustration any clever young girl must have felt, forced from all sides into a corset of customs and conventions

‘Rapunzel’, ‘Sleeping Beauty’, ‘Cinderella’: many of our beloved fairy tales were first told as brave flirts, dark erotic fantasies or seduction attempts by young 19th-century women going for what they want. In The Fairy Tellers (2022), Nicholas Jubber writes that, of the 86 tales first published by the Grimms in 1812, more than 50 were told by women younger than 25, women harbouring secret fantasies, many of them sexual or violent. Beyond trying to impress the boys, these women used their storytelling to grapple with other, equally complicated feelings and fantasies, such as exacting revenge on the authority figures in their lives. Consider the original ending of ‘Snow White and the Seven Dwarves’, in which Snow White’s mother, the wicked queen, is punished for her crimes against her daughter:

slippers made of iron were heated over coals. They were carried over to the wicked queen with tongs, and placed at her feet. Then she was made to walk in those red-hot shoes, and to dance in them. And she did so until she fell to the ground, dead.

Perhaps the genesis of the Snow White story is best understood as the 19th-century equivalent of modern-day teenagers shouting ‘I hate you!’ at their mothers, even if few would have had the vivid imagination of Marie Hassenpflug, who first told the tale of ‘Snow White and the Seven Dwarves’ to the Brothers Grimm at the tender age of 17. A ‘storytelling machine gone wild’, in the words of Maria Tatar, professor of folklore at Harvard University, this folkloric imagination gave the young woman the freedom of the Grimm’s parlour to talk back to her elders, especially in the face of their absence. As Tatar suggests in The Heroine With 1,001 Faces (2021), these tales express the immense frustration any clever young girl in 19th-century Europe must have felt, forced from all sides into a corset of customs and conventions that left her no choice but to be someone’s daughter, mother, sister or wife.

These constraints and demands would have been keenly felt by the young middle-class women who met at Marktgasse 17, and who told their tales not only to seduce and challenge, but to comfort and dream of a better life. Imagine one such evening, with Dortchen telling the story of ‘Rumpelstiltskin’, in which a poor miller meets the king and tells him that his daughter can transform straw into gold. The king sends for her and commands she spin all his straw into gold, or die. ‘Then she was locked in the room where she sat and wept. For the life of her, she didn’t have the slightest inkling of how to spin straw into gold,’ Dortchen might say, perhaps under the intense gaze of Wilhelm – and the soundtrack of Charlotte in the kitchen. Yet this is a hopeful story. With the help of a strange little man called Rumpelstiltskin, the young woman works her alchemy, marries the king and even keeps the child she’d promised to give up in return for the stranger’s help. Maybe Dortchen needed the future to look bright, against all odds, that night.

Hope, resistance, flirtation: these are common threads among the first versions of the Grimms’ fairy tales published in 1812, before they were heavily edited by the brothers ahead of Edgar Taylor’s English translations, first published in 1823. At this point, the names of Dortchen Wild, Marie Hassenpflug and other young female contributors such as Jenny von Droste-Hülshoff had already disappeared from the record, their husbands, sons and brothers ensuring their contributions would not be recognised.

Dortchen and Wilhelm’s son Hermann wrote about his mother and an old neighbour by the name of Marie Müller: ‘One instantly felt that Dortchen and Gretchen probably only broadcast what Old Marie had taught them,’ he said, assigning his mother’s authorship to an elderly woman. The Brothers Grimm went further in their preface to the Children’s and Household Tales, attributing the stories in their collection to a nameless and faceless ‘oral tradition’ collected from dying women out in the countryside who were supposedly ‘becoming more and more scarce’.

The Grimms are not alone in this act of erasure: in France, the civil servant Charles Perrault is remembered as the father of fairy tales. However, it was aristocratic women in the Parisian salons of the 1690s who invented not only our modern word ‘fairy tale’ (contes de fée in French), but also one of its most enduring examples: La Belle et la Bête or Beauty and the Beast, whose author was the aristocratic widow Gabrielle-Suzanne Barbot de Villeneuve, whom Voltaire referred to as ‘that old shrew’. Jubber estimates that roughly two-thirds of the 90 tales surviving from this period were written by women, even if this is no longer widely known today. The same fate has been suffered by storytellers of colour, such as Hanna Diyab from Syria, who brought Aladdin and Ali Baba to Europe in the 18th century.

How many other collections of tales and fables originated with women, not men? What about Aesop’s fables? Homer’s Iliad? The Bible? If we go back far enough, it may be that we owe most of our classic tales to the oral storytelling tradition women have kept alive for thousands of years. Note that the oldest named author in history may well be a woman: the Sumerian priestess Enheduanna is believed to be the author of the Exaltation of Inanna and the Sumerian Temple Hymns, dating from the 23rd century BCE.

Women have been telling tales throughout the ages: to enthral, to speak truth to power, to praise the gods, to comfort themselves, to educate their children and grandchildren, to nurture young minds, for their own pleasure and the pleasure of others. Young women such as Dortchen Wild may have taken great pride in their prowess as storytellers. But most of all, they may have been telling these stories to survive in a hostile environment, to save their souls if not their lives in a world built for men. In the process, they created some of the most enduring stories of our times, full of fun, courage and hope. When the times seem dark and desperate, when resilience is what we need, we might turn to these old tales and listen to the encouraging words of young women.

Stories and literatureImaginationSex and sexuality
13 December 2022