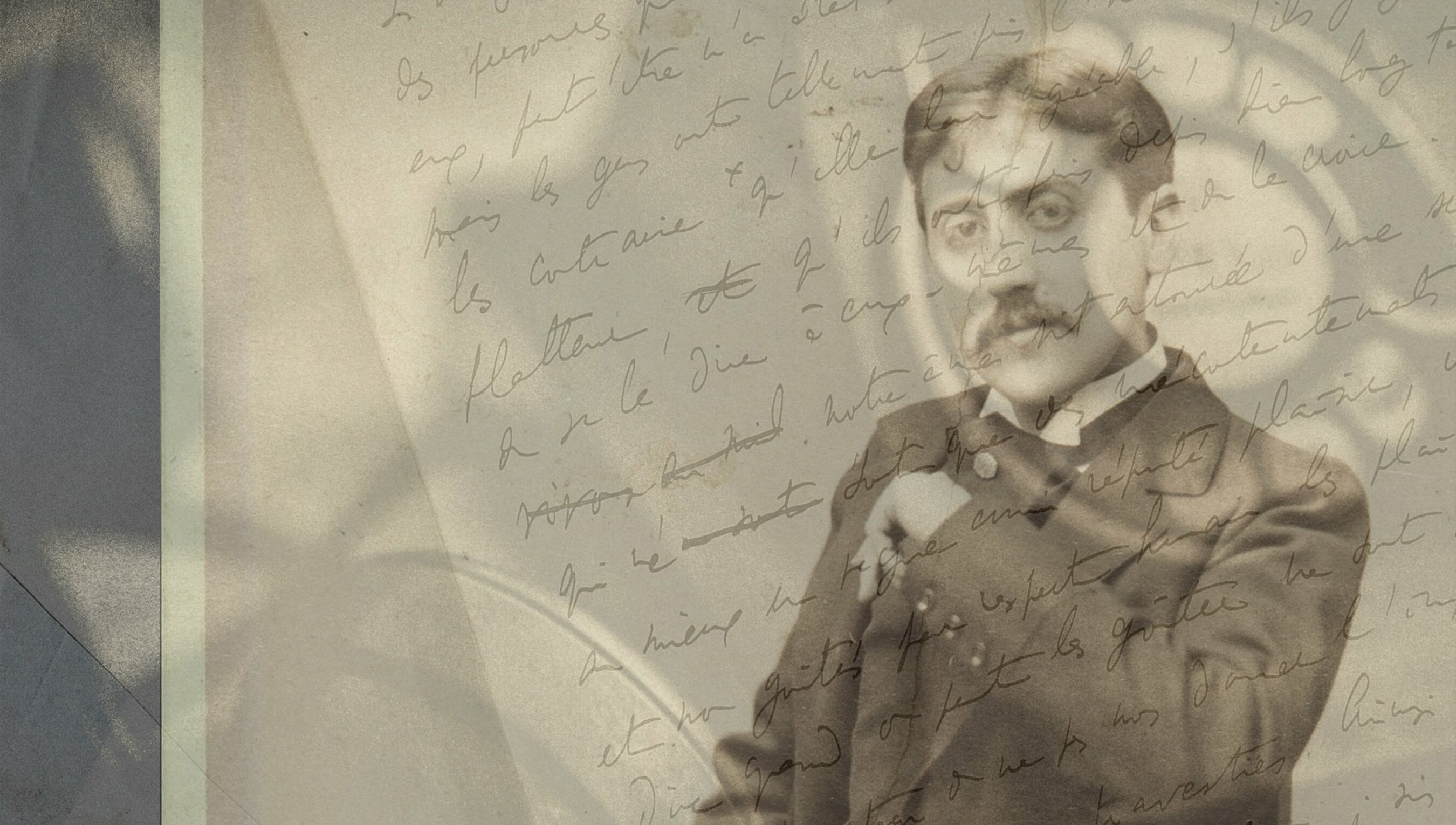 Remembrance of telephony past: what Proust made of the phone

is a senior lecturer in English in the School of the Arts and Media at the University of New South Wales in Sydney, Australia. He has co-edited the collections Incredible Modernism: Literature, Trust, and Deception (2013) and Modernist Work: Labor, Aesthetics, and the Work of Art (2019).

On 20 March 1907, about a year before embarking on À la recherche du temps perdu, Marcel Proust had an article published in Le Figaro, entitled ‘Journées de lecture’ (‘Days of Reading’). Not to be confused with the preface to his translation of John Ruskin’s Sesame and Lilies – later republished under the same title – Proust’s meandering column offers only a few scattered remarks on the recent memoirs of the Comtesse de Boigne and a forthcoming volume of poetry by Anna de Noaïlles, focusing instead on the current interruption of social intercourse among the leisured classes of Paris by an outbreak of contagious disease. In ‘these days of epidemics’, Proust writes, paying visits is inadvisable, and ‘even receiving them [is] not without danger’. Proust was referring to mumps, scarlet fever and measles. However, that spring, France was also emerging from a particularly bad flu season, serious enough for front-page articles on la grippe to appear in several newspapers.

Although the article’s title evokes how social isolation frees up time for reading, its most memorable paragraphs concern the relatively new technology of the telephone, which wealthy Parisians resort to as a substitute for in-person socialising. It is only when this resource is exhausted, Proust drily observes, that they turn to books: ‘first, one telephones a lot.’ Initially, Proust likens telephone exchange operators to supernatural beings, capriciously presiding over the ‘miracle’ of telephony, but then he develops a more sombre analogy between speaking to a loved one on the telephone and communicating with the dead. He confides that, often, when listening to a distant voice:

it has seemed to me that this voice rang out from the depths that one doesn’t return from, and I have known the anxiety that would grip me one day, when a voice would return thus, alone and no longer tied to a body that I was never to see again, to murmur in my ear words I would have wished to kiss as they passed on lips forever consigned to dust.

Housebound readers of Le Figaro expecting a witty riff on modern telephonic manners were instead offered plangent descriptions of telephonic communication as a memento mori – the speaker’s absence foreshadowing the ‘absolute separation’ of death. Rather than being a tool for overcoming the fact of separation, telephony was a way of experiencing absence more profoundly: the disembodied voice is the sound of absence itself.

In her disembodied voice, abstracted from the context of their shared day-to-day life, the narrator notices the signs of his grandmother’s ageing

Divorced from a broader narrative context, these melancholy reflections on the telephone may have struck readers as far-fetched. However, the idea that telephony opens a new register of emotional attachment, intermingling presence with absence and allowing distance to take on sensory form, is one that Proust returns to in his masterwork. In fact, passages from the Figaro article reappear in two different episodes in La recherche. The first is the scene in Le Côté de Guermantes (1920-1), or volume 3, The Guermantes Way, in which the narrator, visiting Saint-Loup while he is stationed with his garrison in Doncières, receives a telephone call from his grandmother in Paris. Here, Proust reprises both the image of the aethereal ‘maidens of the telephone’ and the conceit of the memento mori, reproducing verbatim his 1907 description of a voice from beyond the grave. When the connection is lost, the narrator has the heart-rending impression that

it was already a dear spirit that I had allowed to become lost in the shadows, and alone before the machine, I continued to repeat in vain: ‘Grandmother, grandmother,’ as Orpheus, left alone, repeats the name of the departed.

Beyond conveying a foretaste of his grandmother’s death, the telephone call at Doncières gives the narrator a new awareness of the timbre of her voice. Because it is ‘alone beside me, experienced without the mask of her face’, he becomes acutely conscious of how ‘sweet’ it is, but also how ‘sad’, burdened with the weight of accumulated hardship: ‘I noticed for the first time the suffering that had cracked it over the course of her life.’ In her disembodied voice, abstracted from the context of their shared day-to-day life, the narrator notices the signs of his grandmother’s ageing – the ‘chagrins’ accumulated over time.

Proust incorporated another passage of his Figaro article into a later scene of telephony in Sodome et Gomorrhe (1921), or volume 4 of La recherche, this time involving the narrator and his principal romantic fixation, Albertine Simonet. In this scene, the narrator is waiting anxiously for her call, and focuses so avidly on the expected sound of the telephone bell that he feels as if he is listening directly with his heart. When the call arrives, he’s struck by the ambient traces of Albertine’s sonic environment:

Other sounds were mixed with her words: the horn of a cyclist, the voice of a woman singing, a brass band in the distance resounded as distinctly as the dear voice, as if to show me that it really was Albertine in her actual milieu who was near to me at that moment, like a clod of earth with which one has carried away all the grasses that surround it.

This sonic detritus, ‘truthful details, unconnected with the subject, futile in themselves’, are the ‘cruel’ and ‘sharp-pointed’ insignia of an ‘unknown evening’, the experience of which he cannot share.

As with the earlier conversation with his grandmother, the primary effect of the telephone here is to grant a paradoxically direct impression of someone’s absence. Hearing the grain of his grandmother’s voice, the narrator is painfully aware of his separation from her; hearing random noises in the background, he’s struck by Albertine’s unknown lifeworld, whose contingent details he can only guess at. Both scenes emphasise an encounter with noise: what arrests the narrator is the unexpected supplement that piggybacks the exchange of information, the flotsam of unscripted sound and the fêlures, or fissures, that he notices in his grandmother’s voice.

The telephone’s sensory constraints jolt the narrator out of congealed habits of perception, much in the way that, elsewhere in the novel, chance sense impressions (the madeleine!) unlock the portals of involuntary memory. After hearing notes of distress in his grandmother’s voice, the narrator rushes home from Doncières to see her, finding ‘a crushed old woman whom I didn’t know’. ‘Every habitual glance’, he reflects, effects a kind of ‘necromancy’, making ‘every face we love a mirror of the past’. A period of separation can temporarily suspend this ‘necromancy’ – an experience that the narrator likens to seeing his grandmother’s face through the impersonal eye of a camera. But the same effect is crystallised in the telephone call, which, mingling absence with presence, reveals a vibration in the beloved voice that the narrator customarily ignores.

The conversation with Albertine involves a very different kind of emotional attachment. Yet the way the telephone momentarily rewires his perception of her obeys the same logic as his sudden consciousness of his grandmother’s frailty. Suddenly, the narrator perceives what her life is like when he is absent: an impossible sense impression of what happens when he isn’t there. Telephony, then, enables a kind of overhearing – the ‘effusion’ of ‘tenderness’ that his grandmother would conceal in person; the sounds of an ‘unknown evening’ he was not intended to hear. As he proleptically observes in the latter passage, these seemingly innocuous auditory details provoke a twinge of the obsessive desire for knowledge that will later consume him: ‘With Albertine, I felt that I would never learn anything … And that it would always be thus, unless I were to put her in prison (but people escape) up until the end.’ The pang of grief that assails the narrator when he hears his grandmother’s age in her voice is a purer emotion, but both feelings revolve around the intimation of future loss and the jarring intuition that the being on the other end of the line can’t be securely possessed: they will always elude the narrator’s grasp.

In many ways, the structure of these telephony scenes, in which the consciousness of distance produces an overwhelming surge of attachment, is foreshadowed by the ‘drama of my bedtime’ near the novel’s start. Indeed, the narrator explicitly likens the ‘terrible need for another human being’ that Albertine’s call arouses to the feeling he had as a child when his mother didn’t come up to kiss him goodnight. This earlier episode also involves an instance of mediated communication, this time epistolary, in that the narrator imagines the note he writes imploring his mother to kiss him goodnight to be a kind of roaming avatar: it ‘would allow me, invisible and enraptured, … to enter the same room’ as her. The narrator’s note is a primitive precursor of the telephone calls to his grandmother and to Albertine, in creating a space between presence and absence, energised by longing.

The thwarted socialites that Proust evokes at the beginning of his 1907 article, prevented from seeing one another by a wave of contagious illness, turn to the telephone as a technological prosthesis, expecting it to simulate the sociability they have foregone. But Proust was attuned to a deeper, and more hidden, aspect of telephony. Rather than annihilating distance and replicating face-to-face communication, he saw the telephone as a technology that makes distance palpable, embedding it in the grain of a voice or the auditory traces of a remote milieu. To hear a voice on the telephone in the novel is to eavesdrop on a world one is absent from.

As David Trotter points out in Literature in the First Media Age (2013), the high modernist telephone is still a glitchy technology, prone to malfunction and productive of ‘estrangement’. Later, in the literature of the 1930s, the mechanics of the medium recede into the background. If Le Côté de Guermantes illustrates the modernist tendency to foreground the medium itself, however, the telephone scenes it depicts were also already out of date when they first appeared, dating in part to that Figaro article of 1907, when Proust was recalling even earlier conversations that took place when he lived in Fontainebleau in 1896 and was in the habit of telephoning his mother in Paris. In a letter to Antoine Bibesco from 1902, he describes his mother’s voice in these calls as being full of ‘ƒêlures et de fissures’.

Communication media aspire to invisibility: they want both to disappear from view and to forget their pasts. This is as true of the internet as it was of the telephone. La recherche resists this process by dwelling on telephony’s uncanniness for users to whom it was still new. But it also bears witness to the way that technological experience is subject to a kind of ‘necromancy’: our perceptions of present technologies are overlain with memories of past ones. Part of the melancholy that infuses Proust’s telephone scenes derives from the knowledge that, even at the time of writing, these descriptions are already obsolete, caught up in the ever-receding slipstream of technological modernity.

Editor’s note: the translations in this article are the author’s own.