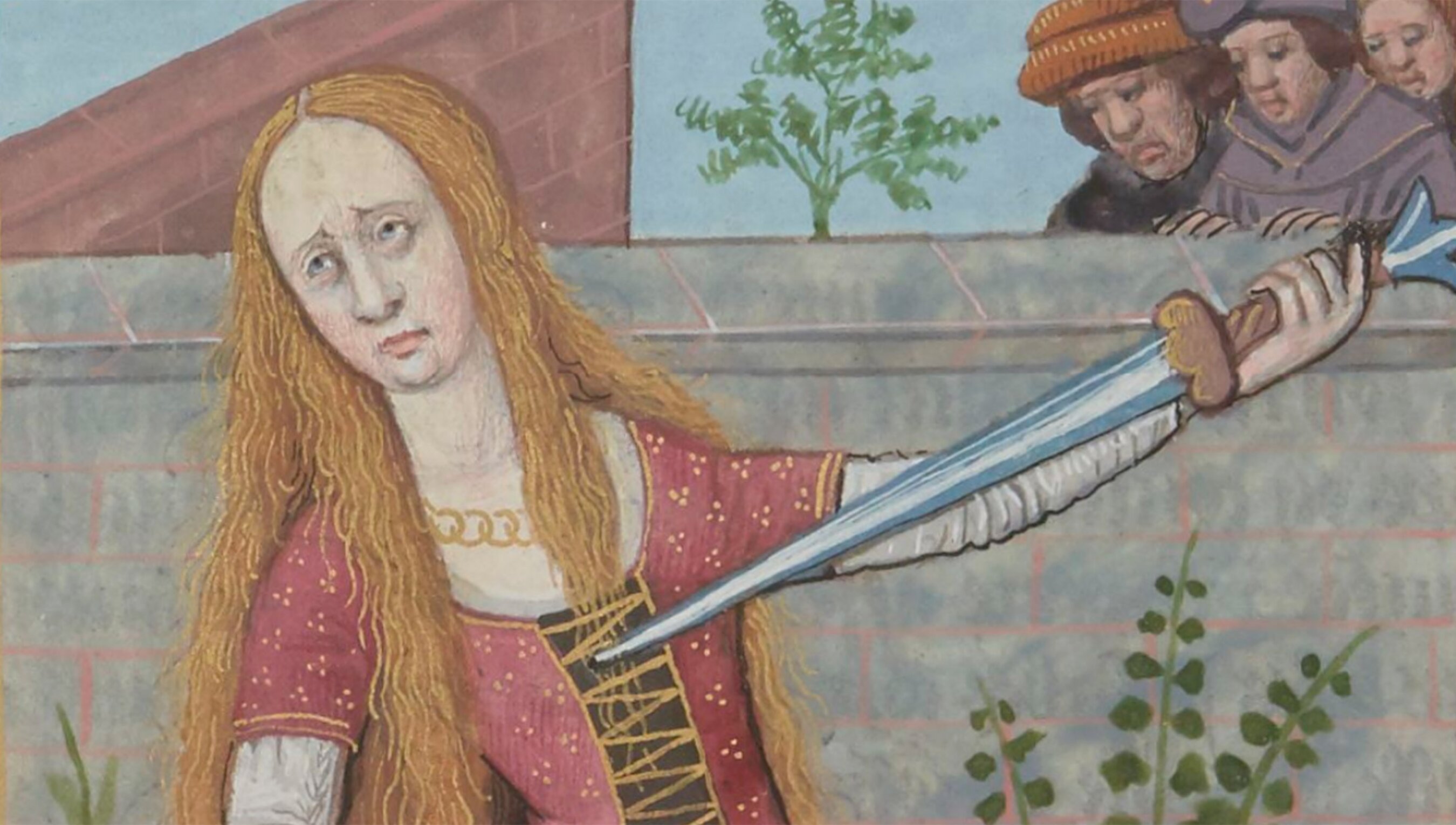 Suicide in Medieval England was not simply a crime or sin

is assistant professor of English at Westmont College in Santa Barbara, California and an Honorary Research Fellow with the Centre of Excellence for the History of Emotions at the University of Western Australia.

People in medieval England struggled with suicide just like people do today, and they also imagined and enacted practices of care and compassion to support the vulnerable. In the last decades of the 13th century, King Edward I extended compassionate action to a number of English subjects whose family members had died by suicide. A century later, a story in Geoffrey Chaucer’s Canterbury Tales shows friends and neighbours responding with care to a woman on the verge of suicide.

Suicide in medieval England was considered a felonious offence, the self-murder of the king’s subject, so the Crown confiscated that person’s goods and chattels. This could leave some women whose fathers or husbands had died by suicide in dire straits, impoverished by the confiscation of goods and chattels and the loss of that man’s future earnings. Legal records suggest that such women petitioned the king for the return of goods and chattels, often using physical or mental sickness (‘acute fever’, ‘anguish’, ‘madness’) to describe the man’s state when he died by suicide. In most cases, the Crown returned the goods and chattels to petitioners, explaining that the person had died by suicide while suffering from sickness or madness or that the woman and her children were now impoverished, acknowledging the extreme circumstances that had led to the suicide while also providing a sort of excuse for returning the goods and chattels. The king’s action is described in these Latin records as ‘compassionate’, language that implies the moral duty of the Crown to be moved by and to mercifully support vulnerable subjects in the face of the trauma and hardship of suicide.

We get a more vivid picture of suicide from medieval English literature. Even though these aren’t the suicidal impulses or deaths of real people, literary depictions engage readers’ feelings. Consider the pangs of sympathy you feel when a character goes through the dark night of the soul, the sense of tragic loss you experience with the death of a hero or heroine – these emotional contours of fictional narratives also shape our emotional lives.

In Chaucer’s Canterbury Tales, the Franklin (a wealthy, free landholder) tells a tale that depicts care for someone struggling with a suicidal impulse. The central character in The Franklin’s Tale is Dorigen, a woman whose honour is threatened almost to the point of suicide. Dorigen descends into deep ‘hevynesse’ when her husband, the noble knight Arveragus, sails away for two years to win honour through feats of arms. Dorigen’s friends comfort her, warning her that she is slaying herself without cause – their consolation working like the slow engraving of an imprint on a stone as they eventually assuage her sorrow. They persuade her to join them for clifftop walks overlooking the ocean, but when she becomes afraid of the black rocks below, they instead take her to other pleasant places to dance and play games.

As she wrestles with what to do, Dorigen cries out to Fortune, lamenting her impossible decision: death or dishonour

At one of these garden revels, Dorigen has a polite exchange with her neighbour, Aurelius, a young, lusty squire who has long been in love with Dorigen (unbeknown to her). When he admits his love for her, she turns him down – she will never be an untrue wife. But then Dorigen makes a rash promise: she jokingly pledges that if Aurelius can remove all of the black rocks on the shore, she will love him.

When, after making a deal with a magician, Aurelius seems to make the rocks disappear, Dorigen finds herself in a bind. As she wrestles with what to do, she cries out to Fortune, lamenting her impossible decision: death or dishonour. She must shame her body by having sex unwillingly with a man who isn’t her husband, or break her promise and thus know herself to be false. Her only solution seems to be death by suicide. In this decision, Dorigen claims, she is not alone, and she describes women from classical literature who have faced a similar impasse. The passage is moving, reading like a medieval #MeToo Twitter thread, and it infuses further compassion into the text by heightening readers’ empathy for Dorigen as she faces the threat of rape or death by suicide.

Ultimately, Aurelius releases Dorigen from her rash promise, affected by how distraught she is and impressed by her husband’s advice to her that she uphold her truth. Granted, choosing not to rape someone and not to cause them further distress that could end in death by suicide is a very low bar. But the characters in the tale are attuned to feelings, and the practices of care that we see for Dorigen, from her friends’ comforting her to Aurelius’s acknowledgement of her great distress and his release of their bond, become potential models for how to recognise and care for someone struggling with a suicidal impulse.

We don’t know exactly how medieval English people felt, but King Edward I’s compassionate responses to petitions of suicide cases and the emotional arcs of The Franklin’s Tale are historical and literary witnesses of people responding practically and with feeling to care for people affected by the trauma of suicide. As readers of these narratives, we’re reminded of the systemic and personal ways that we can support vulnerable people, especially in hard times. Taking a cue from Dorigen’s friends, one of the most meaningful ways we can act is to recognise people who are struggling and to ask one another: ‘Are you OK?’ By attuning ourselves to the emotions of those around us, we open up opportunities to care for one another and even save a life.

In the US, the National Suicide Prevention Lifeline is 1-800-273-8255
In the UK and Ireland, Samaritans can be contacted on 116 123 or email jo@samaritans.org or jo@samaritans.ie
In Australia, the crisis support service Lifeline is 13 11 14
Other international helplines can be found at www.befrienders.org